Jimmy Kimmel, who’s previously done his fair share of normalizing Trump, has recently come out very strongly against the Republicans’ vicious plans for the American health care system. After his newborn child needed emergency heart surgery, he aired a heartfelt appeal to create a health care system where no one has to go without the life-saving care they need. “We need to take care of each other,” he emphasized.

As part of that ongoing appeal, Kimmel opened his show by ripping into the Senate healthcare bill. “They’re calling the plan ‘Bettercare’,” he said, “as in: ‘Just imagine how much better this plan would be if the people who wrote it cared.’ It slashes Medicaid; it could negatively affect millions of poor and elderly people. But, here’s the thing: it won’t happen until 2024. It’s gradual. It makes you wonder, why 2024? What is the significance of that? Will we all be in those pods from The Matrix by then? We won’t need healthcare?”

“The reason it’s 2024 is because that will be after most of the current senators have run for re-election. And then these guys wonder why we hate them.”

After that speech, Kimmel also shared the above interviews with some children. A lot of this video is “cute kid” jokes, in line with Kimmel’s usual all-audiences shtick, but it’s telling how easily the children can answer these basic questions about compassionate, appropriate behavior.

“What if somebody who is poor is sick?” asks Kimmel. “Should people who have money help them to get better?”

“Should all kids be able to go to the doctor when they get sick?” he asks later.

Watching this video, it’s almost as if the only requirement for understanding the right to health care is … the basic human decency we’re all born with! And yet more than half our Congress lacks that crucial quality.

While this video is most worthwhile for pointing out how absurdly cruel it is to punish anyone for being in poor health, there’s also humor to be had. I especially recommend that you watch in order to catch the reactions of these two girls when this boy says he wants to be “a Trump guy.” 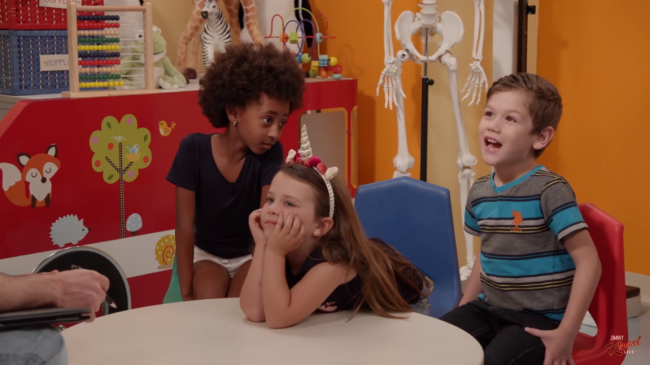 Now, this poor kid is probably just miming his parents’ talking points, so I mostly feel sorry for all the toxicity he must be exposed to. But the girls’ reaction faces…they’re still my everything.

The children, on the whole, know what’s up.

(Via Deadline; featured image via screengrab)