We have to go over this again? 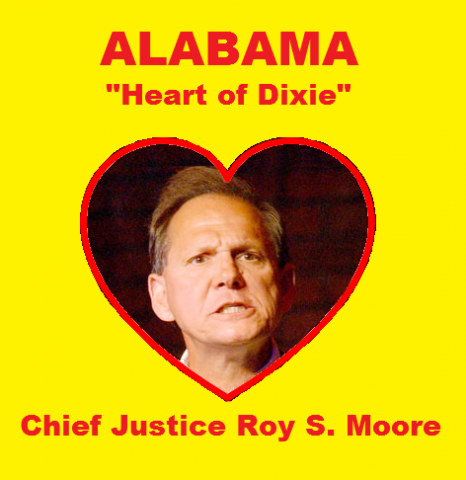 Displaying a complete and utter lack of understanding about the era in which we live, Alabama Chief Justice Roy Moore issued an order effectively re-barring same-sex couples from marriage. The order came in the form of a reminder to probate judges that it is their “ministerial duty not to issue any marriage license contrary” to Alabama’s constitutional amendments–one of which bans same-sex marriage.

This order comes despite the U.S. Supreme Court’s 2015 ruling that such state bans are unconstitutional. So, Chief Justice Moore is essentially informing probate judges that they’re totally ordered to break federal law. Okay, cool, I guess?

It’s Moore’s belief that the Supreme Court ruling has interfered with proper administration of justice within the state. He writes:

Further, Moore commented on the overall issue, saying, “There is a great confusion out there as to what orders to obey. I’m not causing the confusion, I’m trying to clarify it.”

Okay, what? How do you think that you’re not causing confusion by deliberately going against federal law? The only confusion seems to be coming from the fact that you’ve got probate judges who don’t seem to understand that Alabama’s amendment is no longer constitutional. You’re not clarifying things, you’re tying up the legal system again to fight the same ridiculous fight that’s been over for some time now. Ugh.

It’s incredibly clear that only confusion is arising from this administrative order. According to the Associated Press, the Mobile County probate court has stopped issuing marriage licenses to any and all applicants “to ensure full compliance with all court rulings.” So now nobody gets marriage licenses. How’s that for “clarifying things”?

The terrible thing about all of this (aside from the obviously terrible part of banning same-sex marriage) is that all 66 Alabama probate court judges are now stuck between a rock and a hard place. They must now choose to either defy their boss, Moore, or defy federal law. That means they can either be fired or held in contempt, respectively. Good move, boss.

How is this guy still on the bench? I mean, really?

(via The Daily Beast, image via Flickr/Mike Licht)