A miracle romance for the ages. 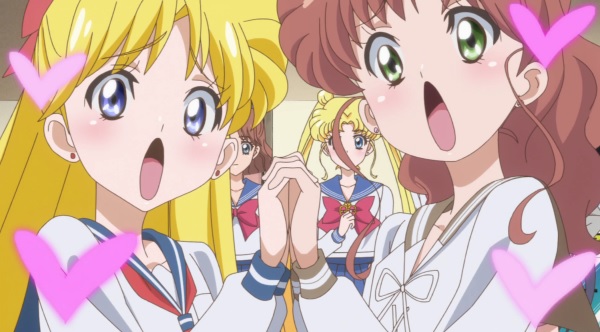 Sailor Moon Crystal premiered to a lot of excitement, but the hype train soon ground to an unceremonious halt thanks to the show’s poor production values, breakneck pacing, questionable changes to the source material, and general lack of energy. Some fans hung on. Many jumped off. With no real nostalgic attachment to the franchise and a ’90s anime I was enjoying much more, I wound up in the second group.

Then the Season 3 (“Death Busters Arc”) announcements rolled out: the show was moving from a bimonthly online (ONA) schedule to a weekly TV one, getting both a new series director (Chiaki Kon) and character designer (Akira Takahashi), and giving itself a Moon Prism Makeover. The hype train let out a low, tentative whistle. Curious but not all that optimistic, I gave the season premiere a try, and was shocked to discover it was actually…fun? Against all odds, Kon and her staff have breathed life into an adaptation that was dead in the water, thanks to a few simple changes that made a huge difference. 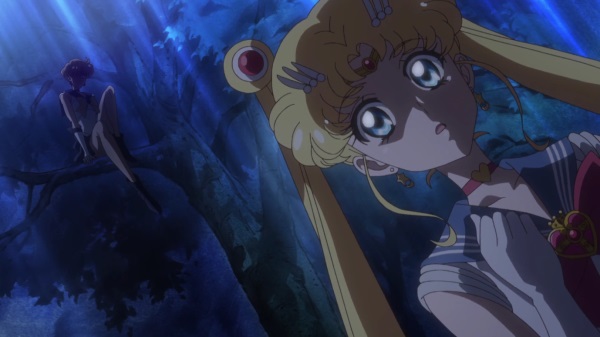 Better Design and Production. In addition to swapping out those wonky CG transformation sequences with traditionally animated ones, Takahashi also updated the character designs, blending Takeuchi’s manga with the ’90s anime to give the cast a softer, younger look. The simpler style is easier to animate, which—coupled with a much better production schedule (the bits of industry chatter I’ve picked up suggest they were working on episodes a lot further in advance this time)—has led to significantly fewer off-model moments and a wider range of expressions, so the Scouts don’t just look like blank-faced dolls all the time.

Storyboarding and cinematography in general have also seen a wonderful uptick in style, imagination, and artistry, using imagery and framing to great effect. While there are still some bland episodes (particularly in the middle), Crystal Season 3 is generally pleasing to look at and at times downright striking. At its best, it uses its art to beautifully and sometimes chillingly convey atmosphere and character emotion far more effectively than dialogue could.

And speaking of those characters… 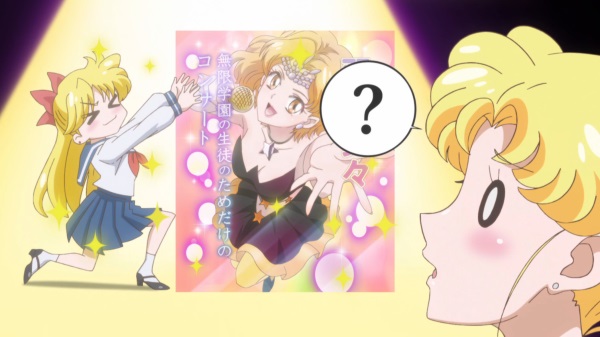 More Distinctive and Endearing Characterization. Wonder of wonders, our Scouts have personalities now! The more expressive character designs help a lot with this, making it easier to throw in some goofy faces and chibi silliness, but the script also takes time to let the kids just be kids, especially in the early episodes. Whether it’s Rei teasing Usagi, Minako fangirling over a local pop star, or Makoto’s competitiveness flaring up, our Inner Guardians feel like individuals instead of a hive-mind of (ineffective) bodyguards.

Granted, there’s still a tendency for the scouts to homogenize (and/or become completely useless) during the more serious, plot-focused moments, but that’s an issue with the source material as much as it is the adaptation. And at least the earlier, lighter episodes give the gals time to stand out so we care more about their welfare when they face off against the Big Bad. 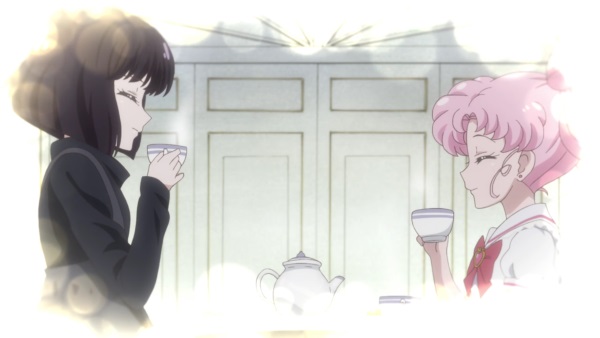 These improvements extend to character relationships too, such as the dynamic between Usagi, Mamoru, and Chibiusa (which is sweet and supportive instead of competitive and problematic), and especially where some of the new cast members are concerned. Usagi and Haruka have a unique relationship rife with sexual tension; Haruka and Michiru feel like a steady old married couple; and Chibiusa and Hotaru are shy and sweet, testing the waters of their first real friendship and potential romance. When supernatural forces threaten to destroy those bonds, there’s real concern here, thanks to the show taking time to establish why we should care in the first place. I may not have teared up during a certain beautifully framed farewell scene, but I came darn close.

Many of these strengths are due to the source material too, of course, but previous Crystal episodes have shown that just being a faithful adaptation doesn’t mean you’ll be a good one. And that’s where Season 3 really stands out from what came before, because… 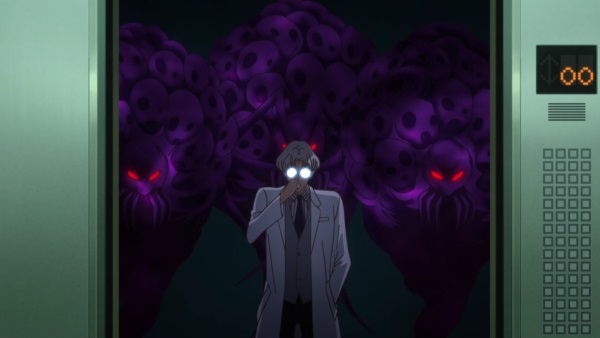 Mostly, It Just Feels Like the People Making It Give a Damn. I can talk about the improved designs and storyboarding, or how the script made room for more character beats (both silly and serious), but the real difference in Crystal is something that’s hard to explain but easy to see in any piece of art: joy for the material. It’s in the little details, like the bursts of tongue-in-cheek silliness, the stylistic homages to the ’90s anime, or the three(!) different ending themes sung by the characters (including this rad tribute to Haruka and Michiru that I can’t stop listening to).

This, more than anything, is why I’m so grateful to Chiaki Kon. Anime is a collaborative effort, so it’s not always easy to point to one person–even the showrunner–and say they’re the reason something improves or gets worse. But while a series director may not oversee every little detail, they do set the tone and general expectations for their show. The tone Kon has set is, simply put, one of love. And that’s gone an awful long way in making Sailor Moon charming and fun again. 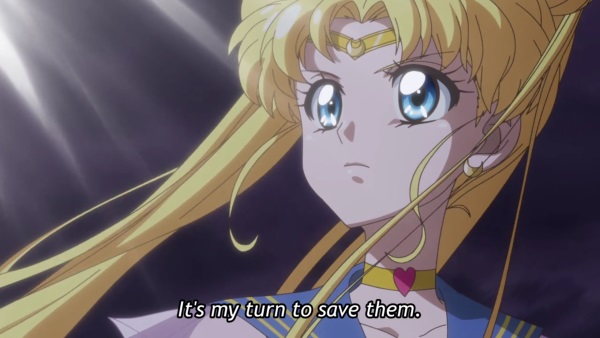 Mind you, Crystal still has its share of imperfections, and whether you decide to give it a second (or first) try will likely come down to how glaring you find those flaws. For one, if you were hoping for more dynamic animation, keep walkin’. Barring a few cool exceptions, Crystal relies heavily on recycled animation and still frames. The show looks 100% better thanks to the improved cinematography, but it struggles to maintain tension during its action sequences, despite the staff’s best efforts.

And, my goodness, the subtitles are just not good. My understanding is the episodes are sent to Crunchyroll and Viz with the subs already encoded, and whoever Toei’s getting to do them has a stiff at best and nonexistent at worst grasp of English grammar and flow. It’s not always bad, but sometimes? Yikes. I’m sure Viz will fix it for their official box set release, but for now, we’re left to chuckle/groan over gems like this: 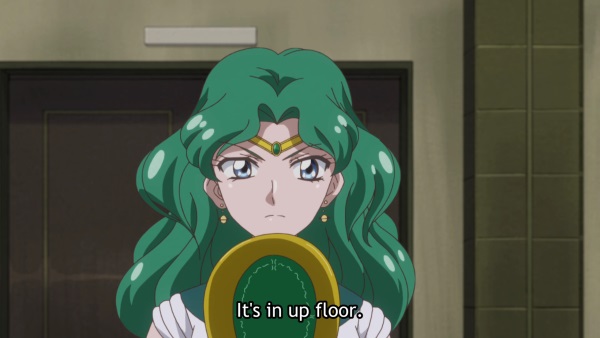 The biggest factor contributing to your Crystal watch party plans, though, likely will have to do with how much you already enjoy Sailor Moon, especially the original manga. The Season 3 script is almost panel-by-panel faithful to the source material, which has its pros (a more mature Usagi, tighter plotting, Haruka smashing the gender binary) as well as its cons: two-dimensional villains, rapid-fire pacing that sometimes hurts character development (the labyrinth) or leads to accidental hilarity (that hospital scene, geez), and a tendency to cram all the exposition into lengthy InfoDumps.

If I’m being totally honest, I still prefer the ’90s anime for its meandering plot, super-fun minions, goofy weapons, and especially . But just because I prefer one doesn’t mean I can’t enjoy both, and Crystal has enough going for it in terms of style and charm that I’d happily come back for more seasons. 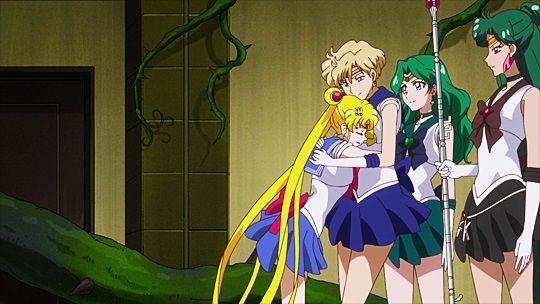 Sailor Moon is a delightful franchise with a lot of positive, progressive messages, and Crystal is finally turning into a worthy addition to its canon. Due to the  rough early seasons and pacing issues, if you’re a newcomer to the Mooniverse, I wouldn’t recommend Crystal as your starting point. Give the manga or the ’90s anime (or both!) a try instead.

But if you’ve enjoyed some version of Sailor Moon in the past and wanted desperately to like Crystal but just couldn’t do it, then here’s a fellow frustrated Moonie flashing you the thumbs-up and encouraging you to give it another go. You might be as pleasantly surprised as I was. 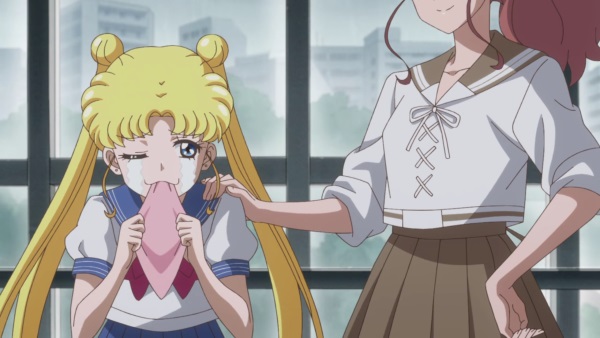 How about you, gang? Have you been keeping up with Crystal? Liking it? Hating it? Excited for the finale next week? Sound off in the comments!