Where Did Chewbacca Come From? 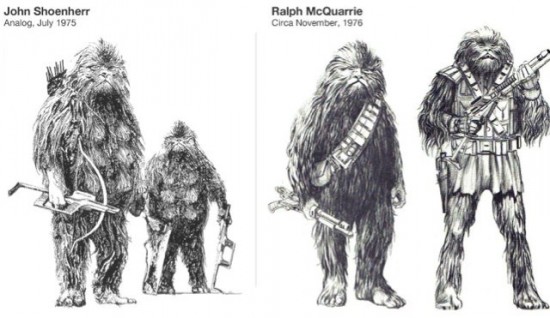 Geeks with an interest in how our culture is produced should definitely take a look at Michael Heilemann‘s long, insightful, well-sourced essay on the creative process that gave rise to Chewbacca. While George Lucas claims to have gotten the idea for Chewy when he saw his dog sitting in the passenger seat of his car, Heilemann argues convincingly that many ingredients went into the making of the character, from a ’30s pulp sci-fi illustration to an Analog magazine illustration by John Shoenherr (above left) to an acquaintance of Lucas’ amazingly named Ralph Wookie.

Heilemann’s aim, though, isn’t to play the pedantic parlor game of saying ‘X stole from Y,’ although his essay is titled “George Lucas Stole Chewbacca, But It’s Okay”; rather, it’s about how Lucas and legendary designer and illustrator Ralph McQuarrie kept pressing on and on to make Chewbacca into exactly what they wanted, borrowing from their lives, the worlds around them, and, yes, the work of others in the process.From the essay:

Chewbacca didn’t spring to life out of nowhere, fully formed when Lucas saw his dog in the passenger seat of his car. That’s the soundbite. A single step. The reality is complex and human. From vague names floating around, the kernel of an idea, changing purposes and roles of characters, major restructuring, the design hopping from person to person, scrapping the existing concept and going down a different path, seeing existing things in a different light and having to conform a range of ideas to complement and enrich one another.

The familiar territory I found myself in was the creative process. I saw the struggles we’ve had on the games I’ve worked on, how some influences would change entirely and others would cruise straight on through to the final product and even the decision making process I’ve gone through on my own projects. It’s a never-ending series of often mundane and very down-to-earth practical decisions, often enough to make you lose sight of the big picture.

It makes one breathe a sigh of relief; Star Wars wasn’t a mystical, muse-favored event; an all-powerful force of unbridled inspiration. It puts its pants on one leg at a time, just like everyone else. But where it differs, is in having the talent, the vision and more importantly, the willingness to say: “This isn’t good enough. This isn’t what I’m looking for”, while keeping the larger picture in mind.

And it’s probably for the better. Can you imagine a Chewy that looked like this? 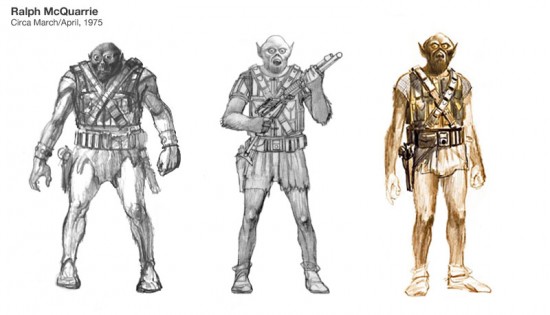 Lots, lots more detail in Heilemann’s essay, which should be geeky required reading not just for the hard work it does beyond merely stating opinion, but for the broader themes which tie it together and justify all that effort.