Chewbacca was all of us.

In the Star Wars universe, Chewbacca’s bowcaster weapon packs a hell of a blast. So why didn’t it level Vader wannabe Kylo Ren, aka Ben Solo, after Chewbacca hit him square-on? Let’s ask math—and the Force.

The Star Wars Theory series, which attempts to answer related questions big and small, has a few intriguing takes on why Kylo Ren survived the direct hit from Chewbacca’s laser crossbow. Previously, we’d seen the massive blasting power of the bowcaster, but Kylo hardly flinched after Chewbacca took his shot.

One of the theories goes that Chewbacca didn’t aim for a killing blow. Quite likely, he was around when then-Ben was growing up and held him as a baby and probably carried him on play-adventures and oh my God, my heart hurts now. 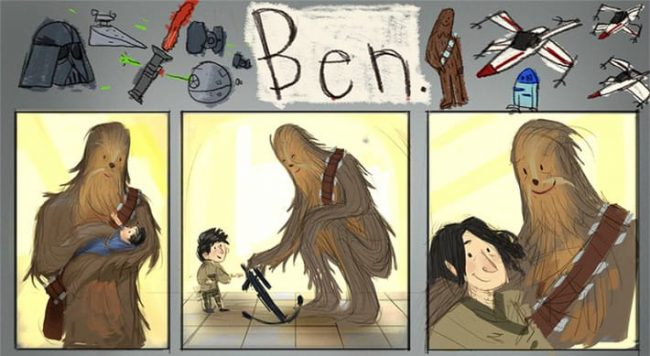 Where was I? So yeah, maybe even in his grief, Chewbacca didn’t want to kill Han and Leia’s only son. On the other hand, Chewbacca was pretty anguished when he took that shot, having just lost his best friend and partner in crime, Han Solo. So, as the video explains, perhaps he was just too far away, mathematically speaking, for the laser to be as brutal as we’d seen it in action before.

My favorite theory here is that Kylo Ren absorbs a killing blast but uses the powers of the Dark Side to keep himself together. During his snowy forest fight with Finn and Rey, we see Kylo repeatedly hitting the wounded area on his side, perhaps using the channeled pain and rage to keep him going. This would explain the weird blows he keeps delivering to his person, which incidentally are cathartic for the audience that wishes we could slap his pouting patricidal face. What do you think? And what do you hope lies in store for Kylo Ren in

What do you think? And what do you hope lies in store for Kylo Ren in The Last Jedi?