Chelsea Clinton Would Like Donald Trump to Keep Her Name Out of His Tweets, Thank You Very Much 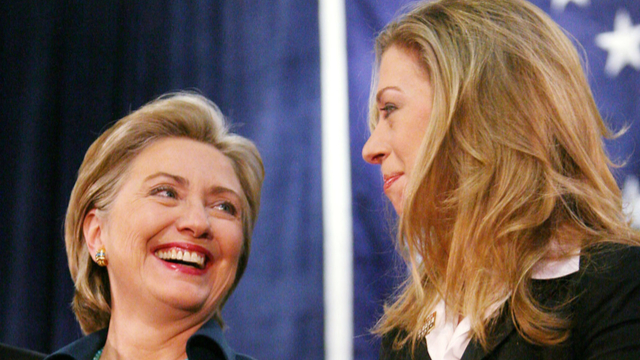 It’s been a banner weekend for the Trump administration/dynasty. Well, it is if that banner reads, “No, Really, WTF Is Going On?” Donald Trump, Jr. essentially admitted to trying to collude with Russia to take down the Clinton campaign; Donald Sr. announced he wanted to start a cyber security best friends club with Putin (before quickly realizing that wasn’t actually going to happen); and, oh yeah, Ivanka Trump briefly got a seat at the G20 table.

During a summit meeting with other world leaders, Donald Trump had to step out momentarily. When that happens, someone from his delegation is chosen to take his seat and fill in until he returns. While most of us might have thought that person should be someone with any political qualifications at all, Trump went a different route and chose his daughter.

Ivanka Trump, unelected, unqualified, daughter-in-chief, is representing the US at the G20 summit next to May, Xi, Merkel. Photo @LanaLukash pic.twitter.com/fvs0EMy8z7

Aaaaand cue the people telling us we’re bad feminists for not wanting an unqualified, nepotistic proxy sitting in with world leaders. Trump’s former deputy campaign manager David Bossie told Fox News that “these feminists are only feminists in name only. They’re only feminists when it affects their checkbook.” Gee, how lucky are we that this guy is here to tell us how to be better feminists.

I’m not sure what “these issues” are, other than 1. Her lack of qualifications in holding such a high-ranking government job, and 2. Admitting she is unqualified and saying she tries “to stay out of politics.” The “issue” then is that she shouldn’t be at a table with world leaders. How very un-feminist of us.

As with most things Trump, it’s impossible not to immediately think what this would look like if tables were turned, if this were being done by anyone but Trump.

If another G20 leader put their daughter or son in the chair we’d be talking about democratic backsliding.

I’m sure Republicans would have taken it in stride if Chelsea Clinton was deputized to perform head of state dutieshttps://t.co/rICj0o9zgh

Even Trump himself is using the what if Hillary did it? argument. His version isn’t so convincing, though.

When I left Conference Room for short meetings with Japan and other countries, I asked Ivanka to hold seat. Very standard. Angela M agrees!

If Chelsea Clinton were asked to hold the seat for her mother,as her mother gave our country away, the Fake News would say CHELSEA FOR PRES!

Chelsea Clinton would like to explain why that’s a meaningless hypothetical nonsense argument.

Good morning Mr. President. It would never have occurred to my mother or my father to ask me. Were you giving our country away? Hoping not. https://t.co/4ODjWZUp0c

That seems like a valid question, no? We’ll just be over here, waiting for an answer, whispering “Chelsea for Pres” to ourselves.
(image: Shutterstock)