Was Charmed Ever Really a Feminist Show? 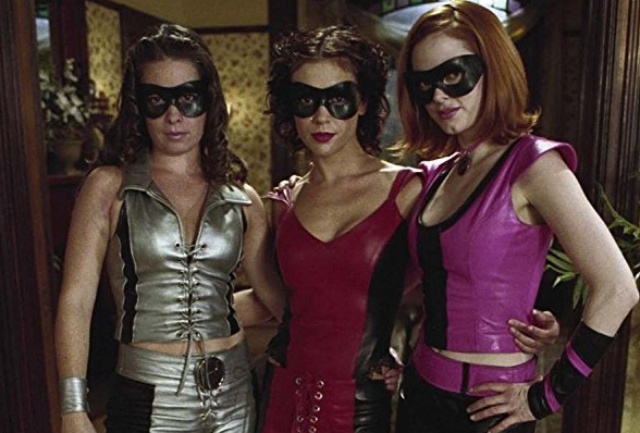 News of the upcoming Charmed reboot has been met with mixed feelings from everyone: fans and people attached to the original series alike. Member of the original ‘Power of Three’ trio Holly Marie Combs, a.k.a. Piper, took to the internet to let people know how she felt about the new reboot.

The way Combs puts it, her huge issues with the series are many, but mostly have to do with the fact that this new reboot will be made with zero input from the original creator of the show, Constance M. Burge, and none of the original cast members will play a part in this reboot as of yet. While this series will be using the named Charmed it seems unlikely that it will have any connection to original show’s mythology and universe.

I have…mixed feelings about it. The Charmed mythology is highly inconsistent and there are multiple continuity holes that would make it complicated to create a series within the same universe that did not completely ret-con many elements of the original series. This show would have continuity errors within the same season of a show. Sometimes only a few episodes apart. Yet, it is very upsetting to hear that this title is just a way of getting the original Charmed  fanbase interested in a product that does not seem to have any interest in appreciating the fun mess of the original show.

However, the thing that caught my interest was this tweet:

Guess we forgot to do that the first go around. Hmph. https://t.co/kDXLBefuSG

When we call something a “feminist show” that encapsulates a lot and I feel that sometimes we do a disservice to female-led media by painting a brush of “feminist” over it just because it includes women in leading roles. That’s a good start, but a female-led series does not a feminist work make. Just for the record, calling a show “feminist” doesn’t automatically mean the show is good or if it is not feminist that makes it bad: you can always process something through a feminist analytical lens regardless of what the source material is like.

So for me I came up with a few rules when it comes to judging if a series is feminist: (a) tackles issues related to gender inequality (b) diverse in terms of its depiction of women (c) women are allowed to have female friends (d) avoids stereotypical depictions of women and, most importantly, (e) the women are well-written/competent.

Now, these are just my own guidelines that I came up with because I felt like there were shows I loved that had feminist themes or tackled some feminist issues, but I wouldn’t be able to call them feminist because for as much as they did that was good there was an equal amount of bad.

Charmed is a mixed bag if we want to view it through a feminist lens, so let’s break it down.

(a) tackles issues related to gender inequality: Charmed is certainly a “girl power” show, which is not a dismissive statement. I grew up on girl power shows/music, and I think they are an important gateway to understanding different things about how gender works. Plus, seeing ladies kick ass on television is always a plus. But Charmed‘s insight into gender is so shallow it barely goes below the surface. Sure they say things like “it’s the woman’s job to save the world,” but they also have a ghost grandma who hates men so much she has to be convinced to love her own grandson. It’s so comical that you can’t help but eyeroll as she cringes at holding baby Wyatt, lamenting that they don’t have boys in the family. Charmed does touch on sexual harassment in the workplace in one episode and over the top sexism by literally turning men into pigs or turkeys, but it is always played for laughs and nothing ever comes from it. Charmed is well-meaning but says very little outside of the cliche and obvious.

(b) diverse in terms of its depiction of women: Yeah, Charmed takes place in a very cis, white and straight part of San Francisco. They have one token non-white cast member in Deryl, there is only ever one non-white man as a love interest in season one, played by John Cho so that’s a plus. When it comes to body type all of the women are fit and young with the exception of Grams, who is fit, but older.

(c) women are allowed to have female friends: Hahahahaha. Nope. Chosen women don’t have friends. In fact other than the core three women, everyone else of importance in their life is a guy. They needed a Kenzi real bad.

(d) avoids stereotypical depictions of women: We went from these kinds of fanservice costumes in Season Three: 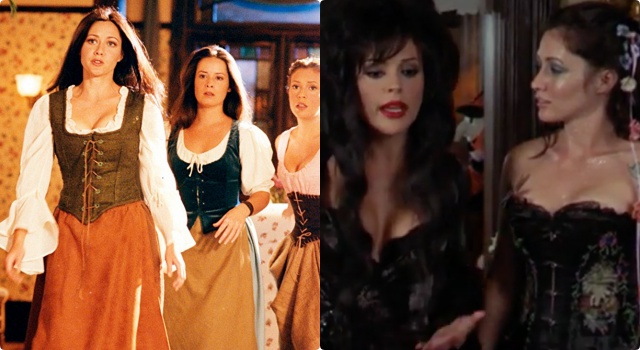 To these in the later seasons: Don’t get me wrong, the earlier seasons would put the girls in some questionable fashion outfits, but it wasn’t frequent and it showed off their personalities really well. In later seasons, the problem isn’t just that it is so blatant and over the top, but that it happens all of the time. After the fourth season, it feels like a race to put Alyssa Milano in as little clothing as possible. While Milano was a producer on the show, as was Combs, neither of them got paid extra for their trouble and while they could help make decisions about storylines and character, it is unclear if those…stylistic choices were their own.

(e) the women are well written/competent: This is a hard one for me. As someone who grew up watching Charmed, I loved the fun costumes, the love stories, and the sister drama. It was definitely a show that defined my youth, and so when I sat down to watch the series from the beginning it was…a weird experience. I didn’t watch much of the pre-Paige episodes so I grew really attached to Prue and I loved what they did with the characters. While the show would play fast and loose with its own canon, and it was far from perfect, I would say that up until Season Four the show and the girls were fun. They had excellent chemistry together and felt like sisters.

Then the dark times came. After Season Five it just becomes so nonsensical and repetitive that I had to stop watching halfway through Season Six because I realized I was fast-forwarding through most of the episodes. The show would have so many jarring plot-holes to watch in a binge situation, I found myself getting frustrated.

Phoebe turned into an obnoxious person who cared more about herself than anybody else and never dealt with any of the repercussions of her actions from the Cole situation. Piper, who was my favorite growing up, doubled down on becoming a den mother and would complain about her guardian angel husband going out to save people’s lives. Paige was mostly fine, they just didn’t always know what to do with her. The Charmed Ones, who were destined to save the world from great evil, turned into Frank Miller anti-heroes who were more angry about being asked to help people than anything else. Saving lives was an irritant that pulled them away from dating or their day jobs or the mundane lives they wanted to leave on the side.

Mind you, I think it is a good idea to show the struggle of trying to maintain a “normal” life while saving the world from evil. However, they complained about it every day and no one ever called them out on it. They were allowed to get away with every hint of bad behavior, cast judgment over everyone else, and just be the worst heroes ever, but the universe acted like they farted roses. It would actually be quite a deconstruction to have the heroines of a story be filthy hedonists who do it reluctantly, but let’s not treat them like the Sailor Scouts.

Charmed started off as a show with feminist intent, and I think overall, there are still really important and worthy things the show does. There is a reason it has retained in the hearts of many. There is a reason why even today, I still love to rewatch the first four seasons. Charmed came at the right time and provided something fun for an audience. It may have run way, way past its expiration date, but that doesn’t take away from the good it did do.

So if we are only focusing on the “feminist” aspect of this reboot, I hope it has something to say, allows the sisters to have friends, doesn’t put them in fanservice costumes for no reasons and allows them to be flawed, fully developed consistant characters.

(image: The WB/Edits made by author)