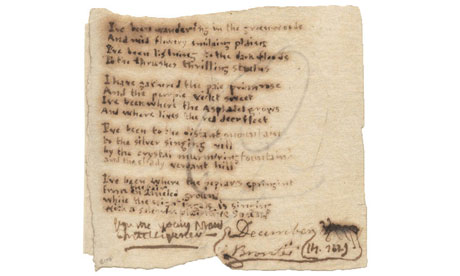 One of the odd side effects of the digital age is the gradual loss of the acres and acres of handwritten or typed manuscripts that could be catalogued by archivists interested in following the career of an author. With “save” taking primacy over “save as,” those windows (no pun intended) into the process of an author stay shut. Probably there are a lot of writers who prefer it that way.

Like most smaller changes wrought by advancing technology these days, I find this more interesting than depressing or uplifting. However, it does mean that two hundred years from now, probably nobody is going to be bidding six figures for a copy of my Scrivener file.

This piece of manuscript contains a handwritten poem by Charlotte Brontë, the author behind Jane Eyre, the only book that I read first for school that I ever elected to read a second time for pleasure. Original manuscripts of the majority of Brontë’s hundreds of poems are owned primarily by institutions rather than individuals, so it’s no wonder that the scrap of paper went for more than double its estimated price at auction.

Signed C Brontë, and dated by her on 14 December 1829, “I’ve been wandering in the greenwoods” is written on a piece of paper measuring just three inches square, and is difficult to read without a magnifying glass. Charlotte and her siblings all wrote in a tiny hand, to make the most of a scarce and expensive paper supply, but they were also short-sighted, so would have been able to see what they were writing themselves, even it was illegible to others.

“I’ve been wandering in the greenwoods” first appeared in the literary magazine the Brontës produced for fun, and you can read the whole poem at The Guardian, without shelling out a cent.