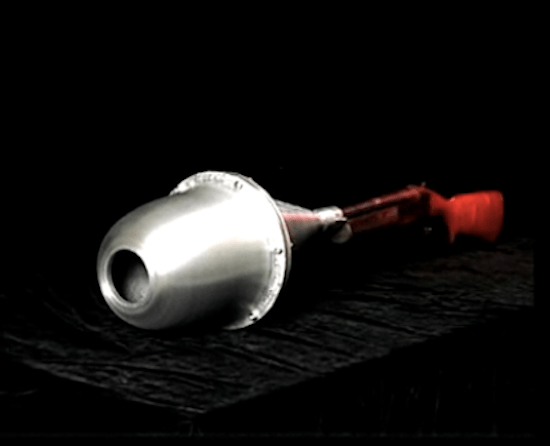 Blowing smoke rings is certainly a pretty cool skill, but that is nothing compared to what you can do with a vortex ring gun. According to Batelle, the device’s creator, their vortex ring guns could one day clear smoke-filled rooms for firefighters, deliver pesticides with remarkable precision at a distance, or even be used as a premiere non-lethal riot control device. And it’s all thanks to electrically-charged smoke rings.

Vortex ring cannons are apparently nothing new, but Batelle believes their twist on the devices could make them not only practical but marketable as well. The company’s press release explains how the device works thusly:

The gun forms vortex rings by forcing air or some other gas at high velocity down the gun’s cylinder. The ring forms when the friction of the cylinder wall causes a thin layer of the gas to roll forward on itself like a donut. Imagine a tornado formed into a donut shape. The ring revolves on itself while traveling out the cylinder and it can maintain that stability for long distances. Depending on the size of the gun, Battelle data confirms that a ring vortex can exit a generator at 90 miles per hour and maintain a speed of at least 60 mph for more than 50 yards.

As the ring leaves the chamber, the Batelle gun gives the ring a slight electrical charge. In firefighting scenarios, this charge could be passed along to the particles of smoke. Once charged, the smoke particles would disperse towards the ground or other surfaces leaving a clearer path.

The charged ring also allows it to better deliver chemicals to specific targets. Like the charged smoke particles, the charged chemicals in the ring would be drawn toward whatever surface they encountered — be it a pesky hornet’s nest or the face of a rioting protestor. Live Science quotes Batelle’s project development lead Jim Dvorsky as saying:

“The ring will disperse as a result of the charge, but in our case that’s actually a good thing,” Dvorsky explained. “It allows us to disperse pepper spray and have it attach to skin or clothing.”

Of course, Battelle says that their vortex ring gun would be a safer, more targeted method for riot control. They point out that current methods for, say, delivering tear gas are far too broad and effect more than just the desired targets. However, I have a hard time imagining that any police department would want to be seen firing tear gas rings at citizens using this bizarre bulbous rifle. Better, perhaps, to stick with firefighting and wasp removal.

I mean, can you imagine how much more shocking casual pepper spray cop would be with a vortex ring gun?