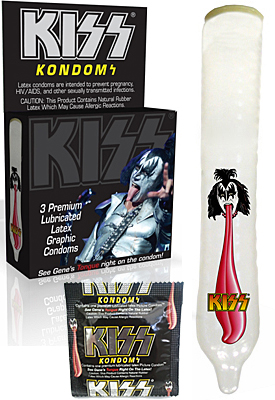 Kiss is about to get all up in our business, almost literally. That, right there, is a condom, currently on the market, with Gene Simmons’ “unfurled” tongue on it, and it’s headed straight for someone’s bathing suit area. What’s notable about it is that it’s a condom with a full-color ad printed on it. And while pictures have appeared on condoms before, this is the first time it’s been FDA-approved. Manufacturer Graphic Armor Inc. says they are the first to offer up such a product. (A Paul Stanley condom will be released later this year.) But if pictures on condoms aren’t your thing, and you still want to jump on the celebrity condom train, go to a Ke$ha concert, where she will ejaculate rubbers with her face on the wrapper all over her audience. You’re welcome!