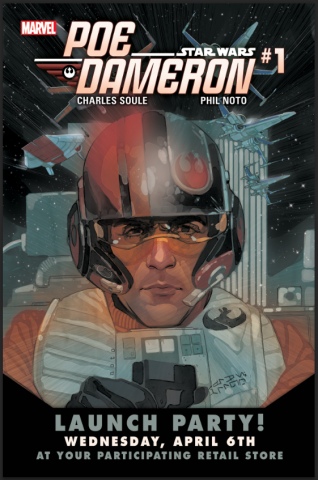 The first issue in Marvel Comics’ Star Wars: Poe Dameron series comes out on April 6th, and on that day, participating comic book stores will host a celebration of The Force Awakens‘ beloved fighter pilot. If you show up to pick up the issue — which will be written by Charles Soule and illustrated by Phil Noto — you might also have the chance to grab some other Poe merch, like “variant covers, buttons, cake toppers and more.”

Here’s some other fun Poe paraphernalia that participating comic book stores will receive from Marvel Comics:

Here’s a preview image of the buttons that will be available:

Those look fantastic! But … I want more information about those cake toppers, which I assume will be designed with wedding cakes in mind, and will look something like this?