"The Woman and the Woods and Other North American Stories" 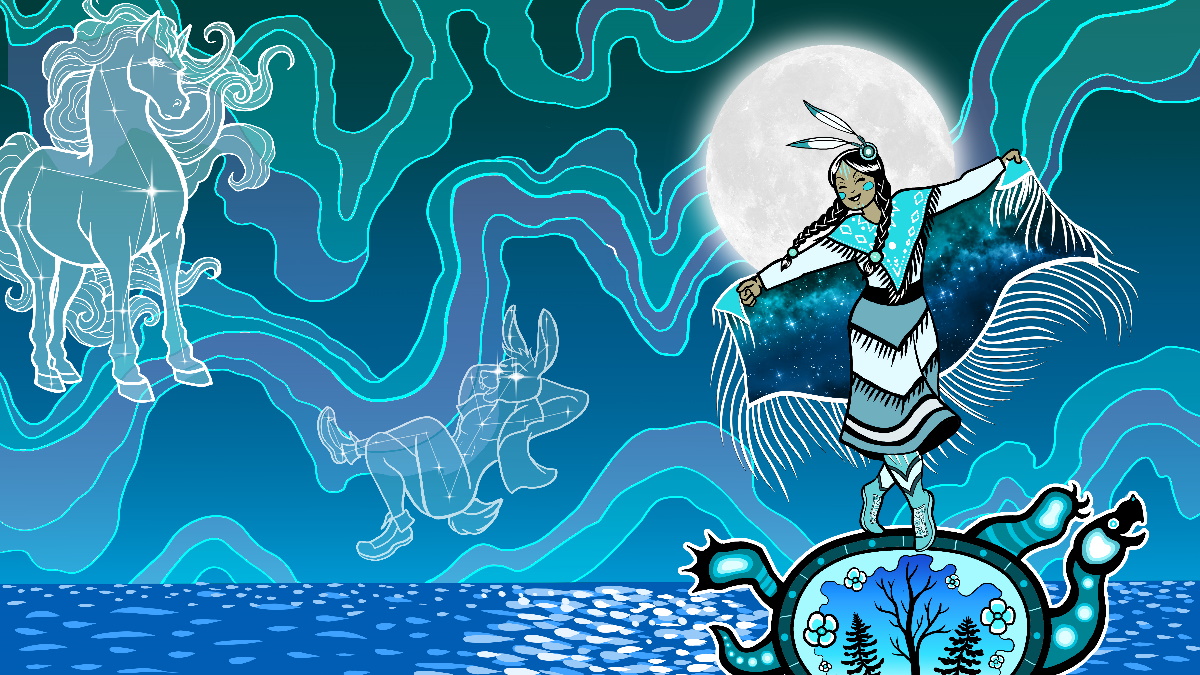 The Woman and the Woods and Other North American Stories is an all-new anthology of fantastic comics inspired by original North American folktales―from the thrilling tale of Chokfi the trickster rabbit, to the stirring story of the White Horse Plains― as told by Indigenous creators.

The book is being released by Spike Trotman’s Iron Circus Comics and will have over 100 pages of work by multiple Indigenous creatives. “Cautionary Fables and Fairy Tales as a series are the books I wish I had as a kid for myself, in a world of endless Grimm and Hans Christen Anderson collections,” she says. “There are so many more stories to be told than so many people realize. I want kids to grow up with a more complete appreciation of fables because that means a more complete appreciation of culture and values.”

I feel similarly to Trotman and would’ve loved growing up with fairy tales from a variety of cultures, which is why I’m such a fan of the work that Iron Circus Comics puts out. Iron Circus Comics tends to be a space that lifts diverse creatives, both creatively and financially, as their Kickstarters are made to pay the creators they seek out with stretch goals made to pay them more.

According to their Kickstarter campaign:

As ever, our funding will be going to paying our artists and printing/shipping the book out to you folks. We do, however, want to pay our contributors as much as we possibly can, so we’ll be using that tried-and-true Iron Circus favorite –  For every $5,000 the Kickstarter makes over goal, all contributors will receive a $5.00 page rate increase! 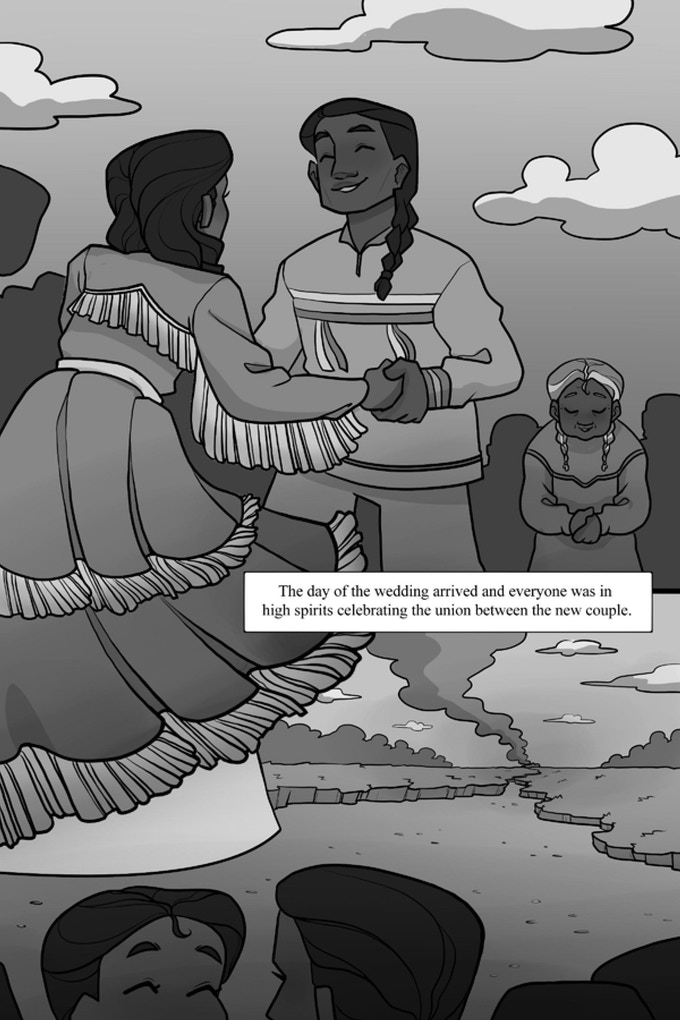 “The contributors to this anthology represent a diverse group of nations from across North America, and traditionally, the stories belong to the nation they’re from, not to any individual storyteller,” says Cree artist and writer, Alina Pete, who curated the list of creatives and did the cover art for the book. “Part of our writer’s responsibility was to make sure they’d done the proper protocol for their nations to ask for permission to retell these stories in this anthology. This group of writers has done a great job of making sure they were doing things ‘the right way’, and our artists have delivered absolutely stellar artwork!”

Currently, the campaign is an astonishing $40K over the initial goal, and knowing that extra funding will be going toward the Indigenous creatives who are working on the project is incredible. The stories and creators are below:

As It Was Told to Me, a creation tale that shows that the world needs good and bad to exist, is written and illustrated by Elijah Forbes, a transgender Odawa illustrator who has facilitated the creation of illustration projects such as the 2020 “Trans Awareness Week.”

Chokfi, the story of the trickster rabbit, who is jealous of Otter’s fur coat and tries to steal it, by writer Jordaan Arledge, a trans Chickasaw comic writer and the founder of Arledge Comics, and Chicana designer/illustrator Mekala Nava.

White Horse Plains, a cautionary tale about greed that comes from the Métis settlement St. Francois Xavier, as told by Rhael McGregor, a Non-Binary/Two-Spirit Métis comic artist and animator from Winnipeg, Manitoba.

Agonjin In the Water by the non-binary, Ojibawe artist Alice RL, is about a girl whose tribe is suffering from a drought and finds a Mishipeshu while searching for water.

Woman in the Woods by the Cuban Taíno artist and storyteller Mercedes Acosta is about a curious girl who sees a mysterious figure in the woods at night. “My story focuses on more than just a mysterious woman in the woods. It’s about listening to elders, venerating the land, respecting the spirits, and understanding boundaries – no matter who sets them. Woman in the Woods starts with an elder telling a story and ends with an elder telling a story. Many Indigenous storytellers often tell their tales in a circle, and I am no different – and just like the elders in my comic, I seek to give advice as much as entertain when telling my stories.”

Into Darkness by Izzy Roberts, a Michigan-based illustrator and a member of the Navajo Nation and Kinyaa’áanii clan, is about a creature so dangerous and scary that no one dares utter its name. 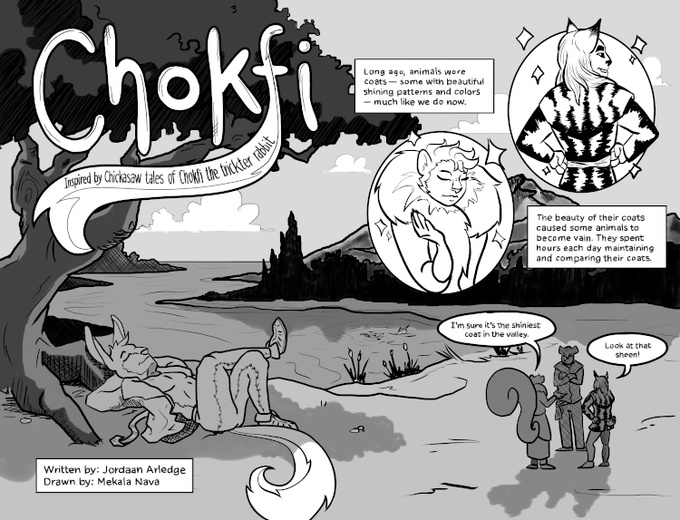 “The world is so full of stories. Each vibrant and unique to the people and regions they grew from,” says editor Kel McDonald. “With Cautionary Fables and Fairytales, we’ve been trying our best to foster a love and respect of tales from all regions.”

You can check out the campaign right over here. 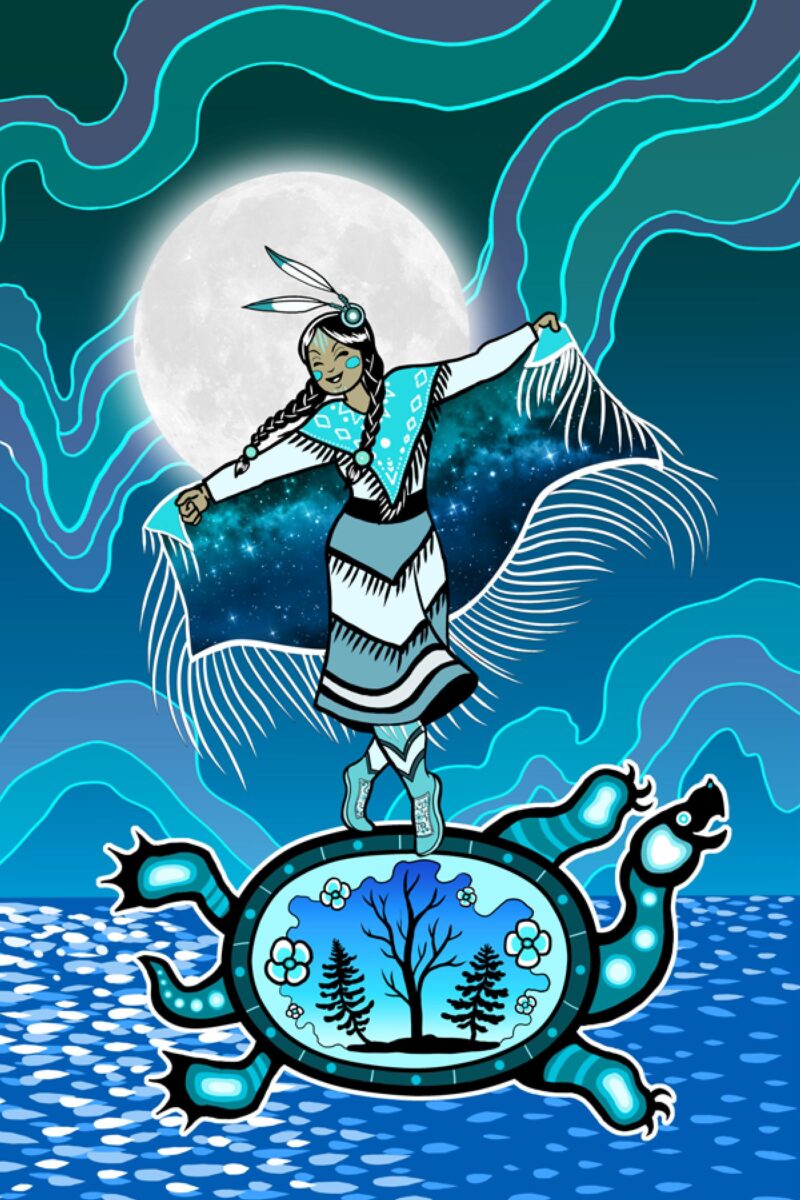 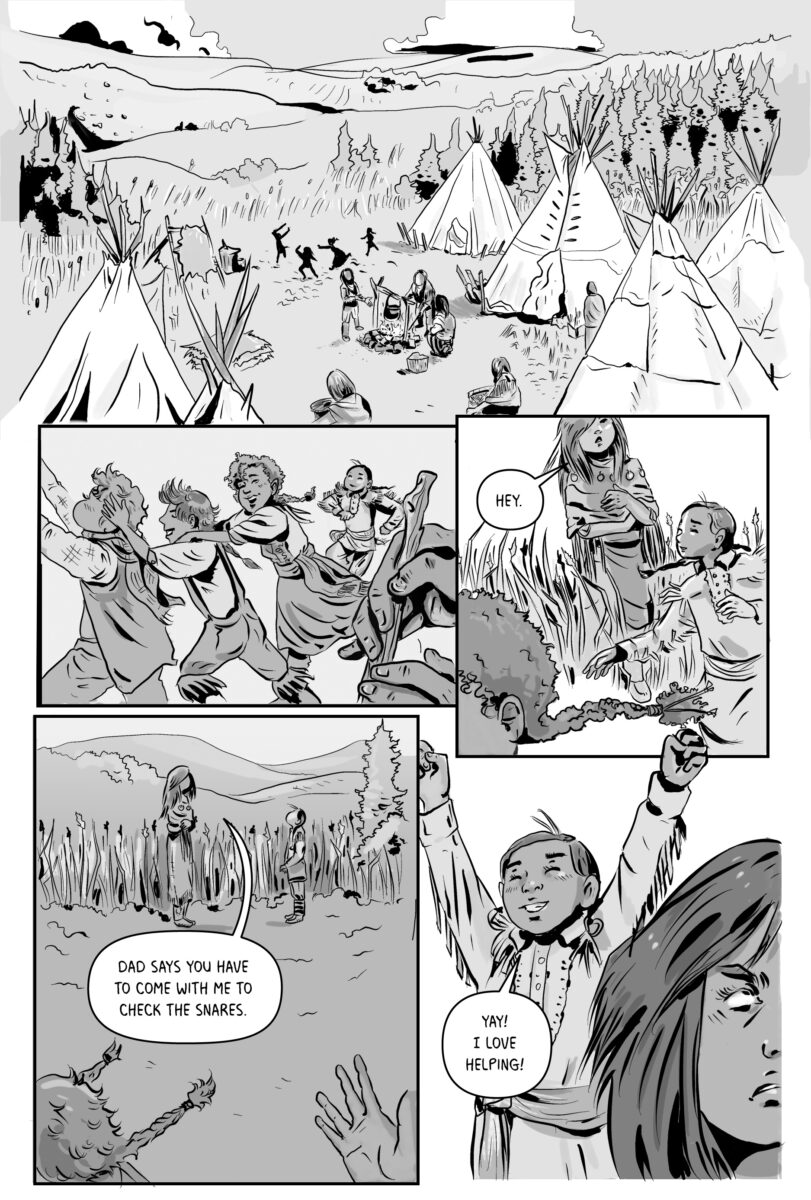 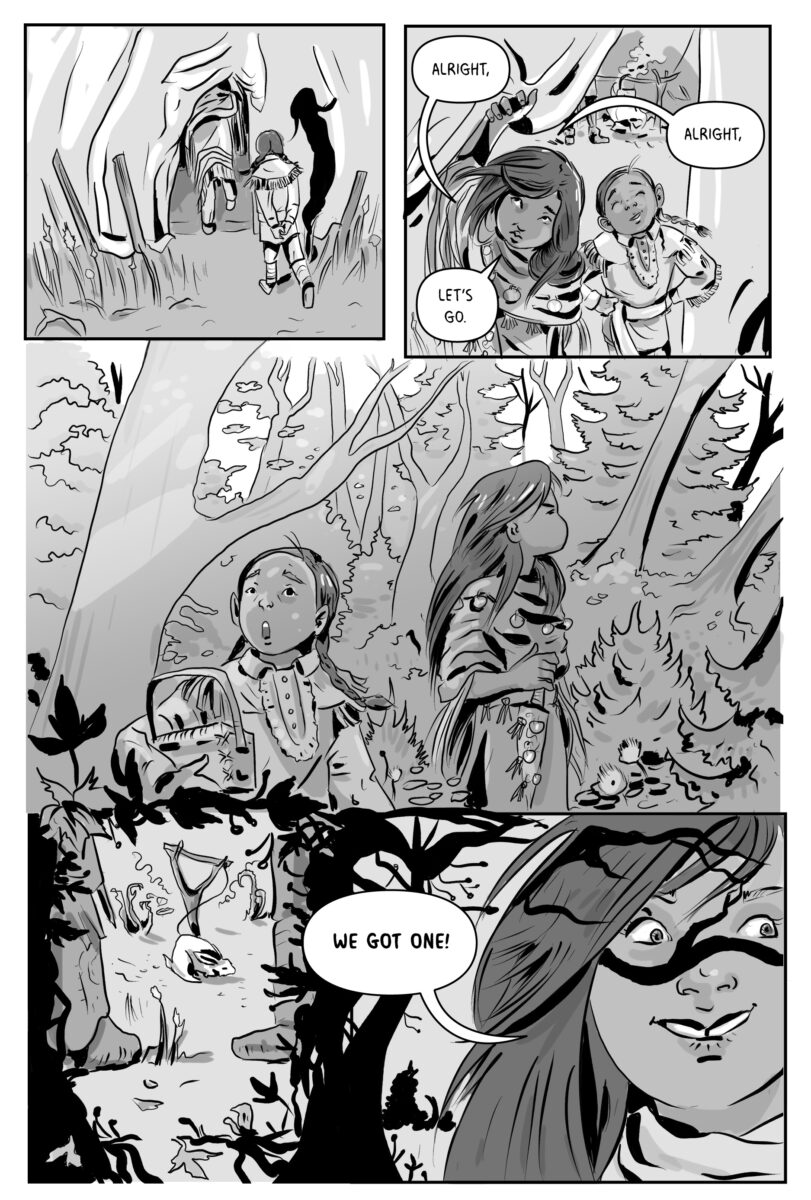 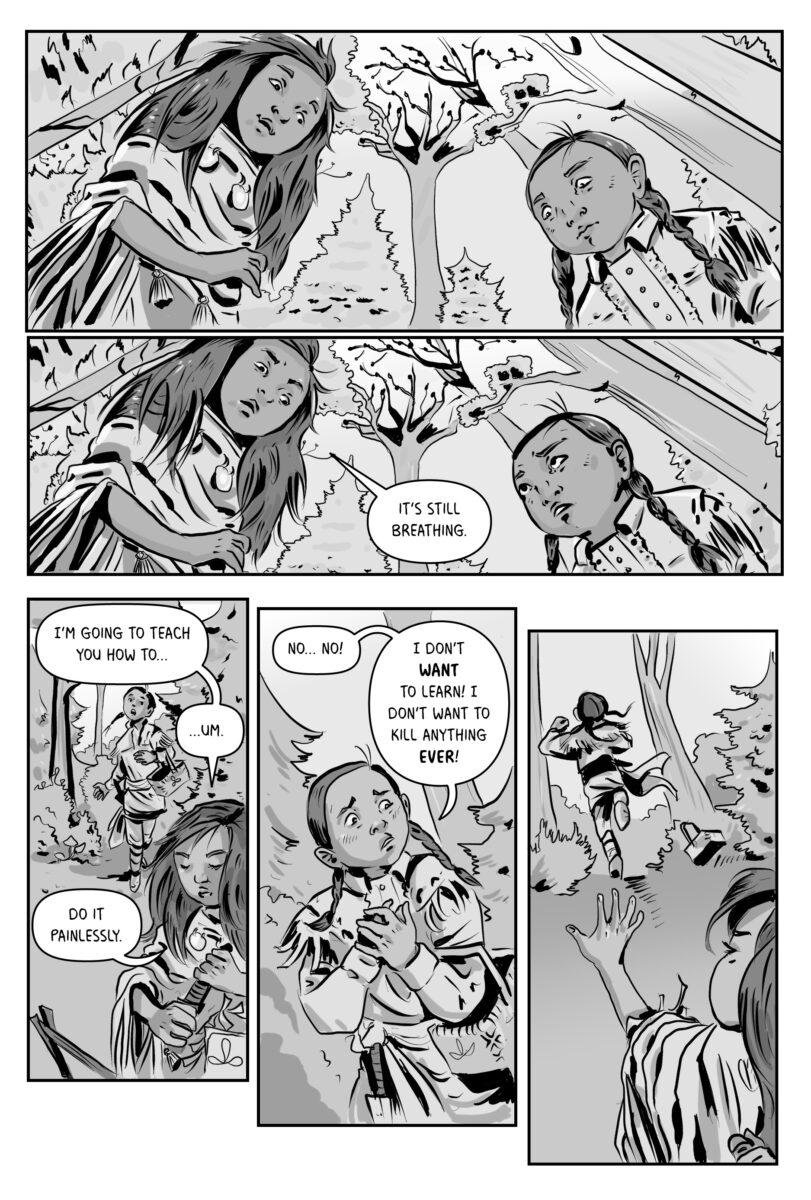 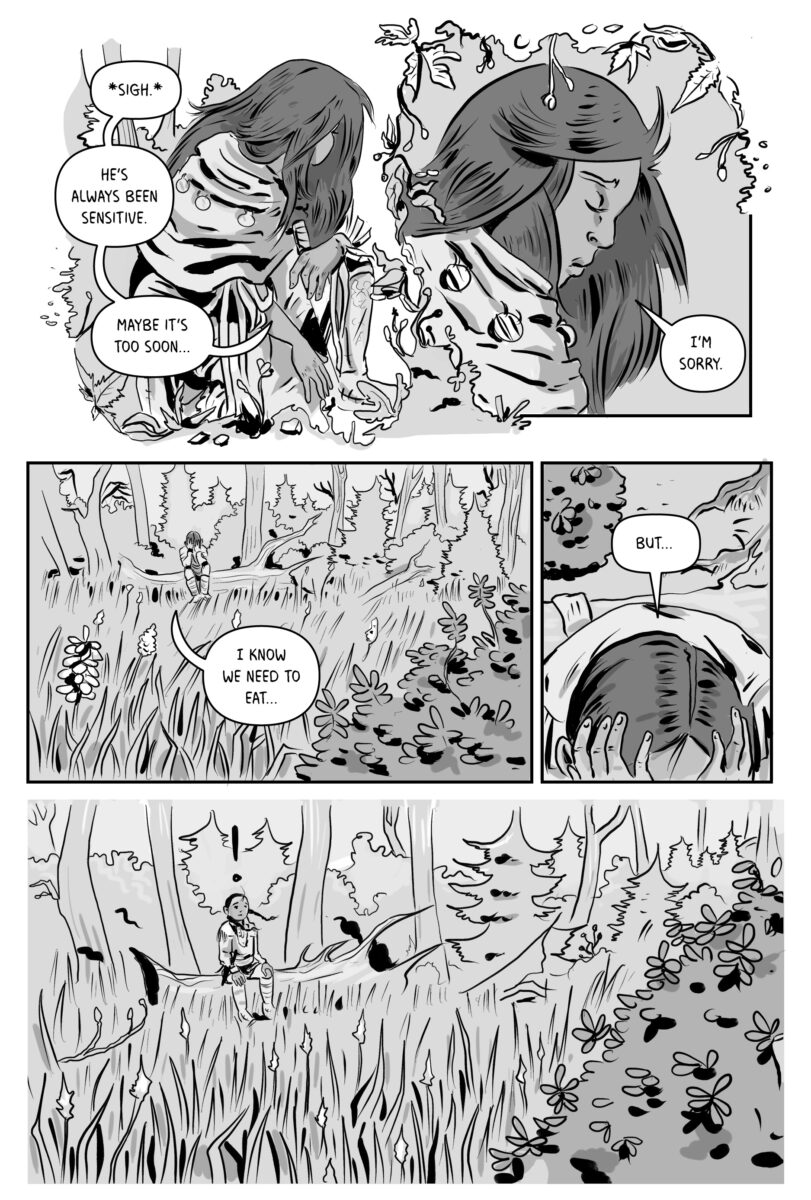 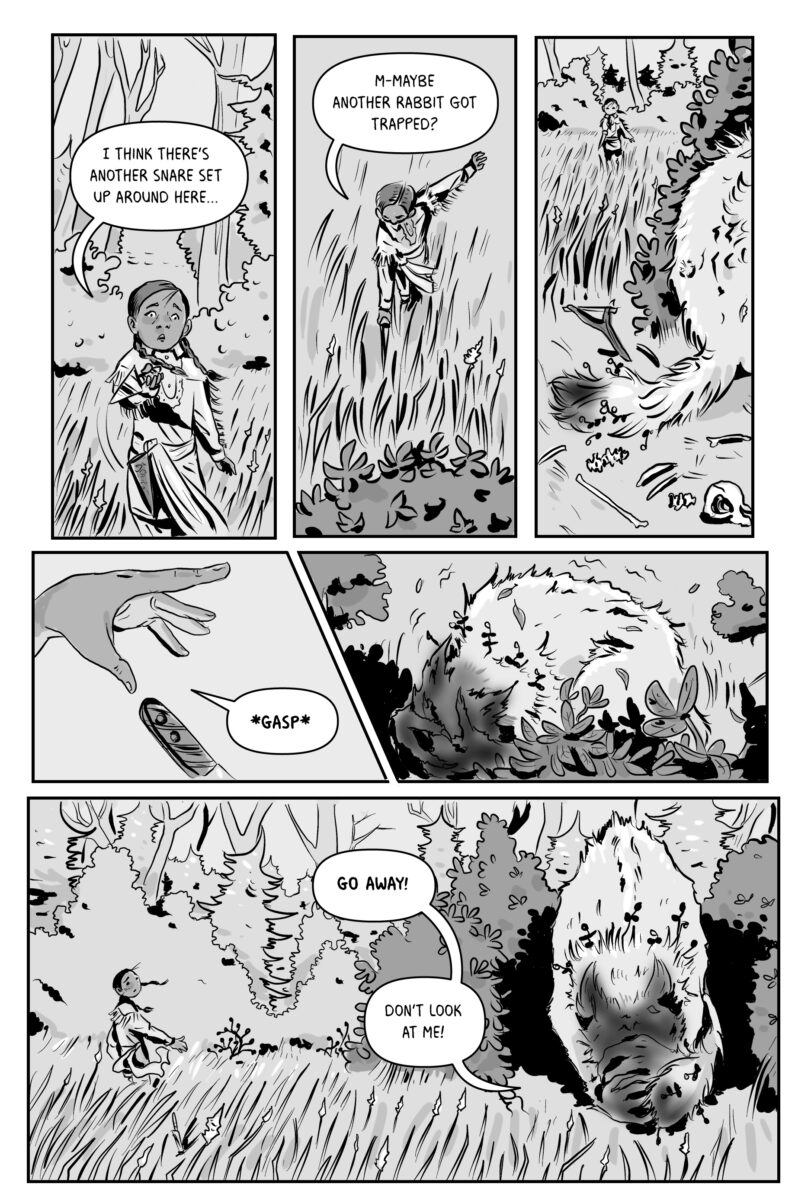