Game of Thrones' Catelyn Stark For U.S. Secretary Of State? | The Mary Sue

A Campaign For Game of Thrones’ Catelyn Stark To Be The Next U.S. Secretary Of State 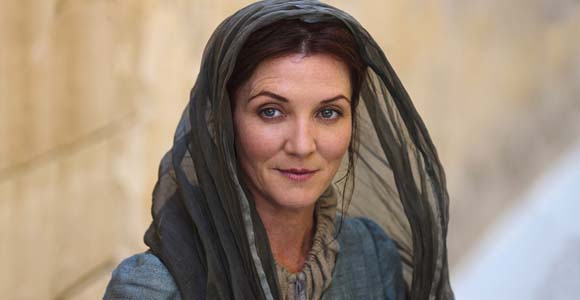 Hillary Clinton has officially stepped down as America’s Secretary of State and while former Sen. John Kerry has already been tapped as her replacement, a new contendor has entered the ring. Or should I say, game. See, someone has decided Lady Catelyn Stark (née Tully), Lady of Winterfell, would make a much better candidate. Find out why after the jump.

The letter was written for fan-site HBO Watch by contributor Jonathan R. Meyers. Not to be confused with actor Jonathan Rhys Meyers, which many have done.

It reads as follows (we’ve covered what we believe to be the only real spoiler for the upcoming third season):

Dear President Barack H. Obama, The Second of His Name, King of the Anglos, Lord of the Fifty States, Protector of the Realm:

Congratulations on your recent reelection and inauguration to a second term as President of the United States. Great challenges await you and your new administration, many of which are emanating from foreign lands requiring someone of honor and experience to serve as your advisor and emissary. It is that need which compels me to write to you and put forth the name of Catelyn Stark to serve as your Secretary of State. Lady Stark possesses the personal qualities and demonstrates the experience necessary to represent you in this prestigious position as supreme diplomat for the realm.

It is known throughout the lands that your original favor fell to Lady Susan Rice but was scuttled by Bannermen loyal to Lord McConnell. Consider that Lady Stark would fulfill your original intent by following in the footsteps of esteemed Lady Secretaries of State such as Madeleine Albright and Hillary Clinton.

Now far be it from me to denigrate the honor of your newest choice, John Kerry. Indeed Lord Kerry served valiantly in the Vietnam War; however it must be said that he was notably absent from Robert’s Rebellion which liberated Westeros from the dictator Aerys II. And though Lord Kerry’s tenure on the Senate Foreign Relations Committee has been lengthy, one must wonder why he has failed to secure a position on the King’s Small Council.

Lady Catelyn Stark is inarguably a superior candidate for Secretary of State. She is a highborn Lady of the Riverlands and lives the motto of her house: Family, Duty, Honor; coveted principles all for any of your high counselors. While many high lords only talk of family values, Lady Stark takes action as she did with her young son when protecting his mind from viewing an execution, nurturing his spirit after he was crippled from a fall, and shielding his body from an assassin’s blade. A commitment to duty also guides Catelyn Stark. For the good of the realm, she abandoned her misgivings about her husband’s appointment to Hand, left her youngest sons to warn of a foreign plot, and attended to urgent matters of war and peace rather than be with her own dying father. Her honor is a thread that weaves through her every thought and deed, and she is a woman who takes her vows and those of others as a sacred pledge to the living, to the old gods, and to the new. A woman whose very purpose is family, duty, and honor would make an exceptional Secretary of State.

Beyond her admirable character, Catelyn Stark has the experience required to serve as Secretary of State. The principal role of one granted this venerable position in our government is to be an advisor on foreign matters. Additionally, the Secretary serves as an ambassador to external powers, and takes part in high ranking negotiations to forge agreements and treaties. Obviously, such tasks require a not insignificant amount of travel, to which Lady Stark, having been raised in the Riverlands, resided in Winterfell, and relocated to King’s Landing, is no stranger.

On one such trip, Catelyn Stark demonstrated quick strategic thinking, the rallying of allies and the kind of use of smart power advocated by Lady Clinton. Whilst pausing from her travel at the Inn at the Crossroads, Lady Stark encountered a known member of the Lannister leadership. By appealing to family and cultural familiarities, she immediately summoned the loyalty of local swordsmen to seize Tyrion Lannister. Though she could have ordered his execution, she instead relied on extraordinary rendition — a tempered response that respected due process and the King’s Justice. Additionally, she disseminated misinformation to lead hostile forces astray so as to avoid confrontation while transporting her prisoner. Such clever use of stealth, coordination of allies, and decisive but measured action would have made Lady Stark another valued team member during your glorious night time raid on Abbottabad.

Now further contemplate the experience Lady Stark has as an advisor. She has provided wise counsel to and had influence on the Hand of the King, and is a key confidant of her eldest son Robb, the King in the North. Furthermore, she has long been serving as an ambassador, in deeds if not in name. Evaluate, if you will, her brave pilgrimage to secure a peace with Lord Renly Baratheon. Assuming the role purely out of duty, she traveled to Lord Renly’s camp in foreign lands and declared, “I come as envoy from my son, Robb Stark, the King in the North, to treat with Renly”. Through forceful yet wise words, her reason won over Lord Renly and an alliance was established — precisely the duties of Secretary of State.

But her determination and skills at negotiation have extended to other parts of the realm. I speak of the Twins, a crossing controlled by a man, Walder Frey, of little honor and even less allegiance, yet required for the army of Robb Stark to attack the Lannister host. Though use of force was briefly considered, Catelyn Stark, at considerable personal risk, volunteered to directly approach Walder Frey and negotiate for safe passage. After suppressing her disgust at his lechery and disloyalty, Lady Stark ascertained what is of value to him and struck an agreement that secured the crossing so indispensible for the planned military strike. Again Catelyn Stark ventured forth to insist on a high level meeting with a semi-hostile power, and through pure diplomacy and compromise, achieved her foreign policy goals. With Lady Stark representing you as Secretary of State, our drones will be free to roam the air-space of friend and foe alike.

Perhaps her most ambitious efforts that further establish her unparalleled credentials, involved coordinating yet another meeting between rival foreign leaders to negotiate a treaty- Catelyn Stark’s attempt to broker peace between Stannis Baratheon and Renly Baratheon. At this parley, which Lady Stark convinced Lord Renly to attend, she appealed to the brothers to recognize their common heritage, minimized the difference between their gods, and most compellingly, she declared “We three share a common foe who would destroy us all.” Lady Stark’s tenacity and ability to align interests would make her a valuable asset in the most difficult Middle East negotiations.

Even after this meeting, Catelyn Stark made a final plea to Lord Renly to join with Stannis to publicize Lannister crimes and hold free and fair elections among the Lords of Westeros. Perhaps this last proposal would have succeeded were it not for the horrific assassination of Lord Renly Baratheon by forces as yet unknown (I am aware that the little birds of the CIA have implicated Iran).

In a world that is dark and full or terrors, we need a woman’s courage. So please Mr. President, The Second of His Name, King of the Anglos, Lord of the Fifty States, Protector of the Realm, consider the personal integrity, the mettle, and the vast diplomatic experience exhibited by Lady Catelyn Stark and nominate her to be the next Secretary of State.

Sincerely,
Jonathan R. Meyers, The First of His Name, Citizen of the Fifty States, Contributor to HBOWatch

What do you think, does Meyers make a good case for Lady Stark? In other news, I think I’m going to start giving myself a 4-title name on all posts.