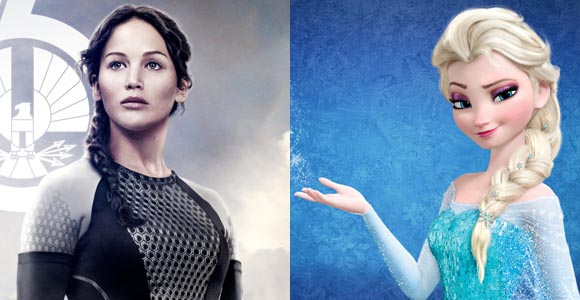 We’ve been hearing Frozen was doing well, but this well? “This past weekend — its sixth in nationwide release — the Disney Animation Studios’ Thanksgiving entry took in $19.6 million to place No. 1. That’s the most earned by any film in its sixth weekend of release, outside of Avatar ($34.9) and Titanic ($25.2 million), not accounting for inflation,” according to The Hollywood Reporter.

We already knew the film was a milestone for Disney – it was their biggest opening ever for an animated feature – and THR writes, “Next weekend, it should have no trouble overtaking Lion King to become the most successful Disney Animation title of all time domestically, not accounting for inflation.” While I doubt it will come close to Avatar or Titanic when all is said and done, this news is pretty impressive.

Anyway, I still haven’t seen it so they can count on a few more dollars. Meanwhile, reports were starting to surface hailing The Hunger Games: Catching Fire as “The Biggest Movie of 2013” and that it “will officially pass ‘Iron Man 3‘ at the box-office to become the biggest movie of 2013 with just over $409 million.” This according to ScreenCrush.

However, they fail to mention anywhere in the piece that those numbers are only for the domestic box office, which is kind of important if you’re saying “Biggest Movie of 2013.” Regardless, the report is accurate in saying, “As it stood yesterday, ‘Iron Man 3′ has grossed $409 million domestically with ‘Catching Fire’ at $407.1 million, but with ‘Iron Man 3′ out of theaters and ‘Catching Fire’ still playing in over 2,000 theaters, the latest ‘Hunger Games’ movie will take the number one spot by the day’s end.” Again, domestically.

Since yesterday, BoxOfficeMojo.com hadn’t updated any numbers but Catching Fire does hold the title of best November opening ever in front of a bunch of Twilight and Harry Potter releases, and did very well for studio Lionsgate. But here’s the really good part of Screencrush’s post:

Secondly, and perhaps more important, ‘Catching Fire’ will be the first female-led movie to top the yearly box-office since Julie Andrews climbed ev’ry mountain in 1959′s ‘The Sound of Music.’ Combined with ‘Gravity‘ (another female-led film in the top 10), movies with strong female leads grossed over $660 million. In a system where we, among others, have openly wondered why it’s so hard to make a good female superhero movie, maybe this is the evidence Hollywood needs that women can be just as much the action stars as men. We can all bitch about it until we’re blue in the face, but money talks, and this strong performance by Jennifer Lawrence and Sandra Bullock might be too much money to ignore.