Revisiting the Kick-Ass Female Lead Of Castlevania: Order of Ecclesia

“Hear me! I am the morning sun, come to vanquish this horrible night!” 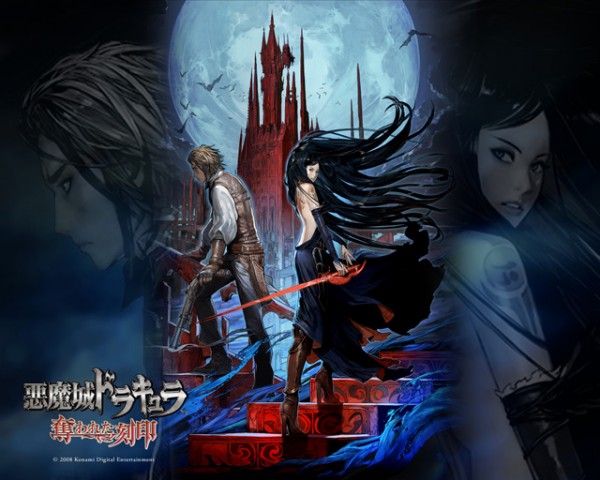 Female leads in video games are often put under a punishing lens of criticism. Are they powerful? Self-reliant? Too sexy? Not sexy enough? Lara Croft’s reinvention in the latest Tomb Raider helped shed the uncomfortable past of being defined by her over-generous polygons. But in this week’s release of Bayonetta 2, the impossibly proportioned daredevil again raised the question: Have video games ever done female leads right?

The answer is, of course, that they have. And while most lists mention favourites like Chell from Portal or Jade from Beyond Good & Evil, there are others that too few gamers remember.

Castlevania: Order of Ecclesia was released in 2008 on the Nintendo DS, headed by director Koji Igarashi. It was the last ‘vania game that followed the “Metroidvania” format, popularized by the 1997 classic Castlevania: Symphony of the Night. In these games, your hero traverses a giant map, part or all of which takes place in Lord Dracula’s castle, slaying monsters and finding new skills that let you open up new areas as the game progresses.

In most Castlevania games the main character is a member of the Belmont family of vampire hunters. Usually it’s a guy—Simon or Richter Belmont, for example. Playable female characters have appeared before (and we’ll get to them later), but Order of Ecclesia was the first ‘vania in 20 years to feature a woman as its lead.

Shanoa is a member of Ecclesia, an order of vampire hunters founded in the years after the Belmont clan drifted into obscurity sometime in the 1800s. Shanoa is the most powerful student of the order’s founder, a priest named Barlowe.

At the beginning of the game, Shanoa loses her memories as a result of an explosive duel between Barlowe and another Ecclesia member, Albus. She’s then tasked with hunting Albus down for stealing Dominus, a magical seal that allegedly has the powers to kill Dracula for good.

Shanoa hits most of the Strong Female Character’s expected notes. She’s strong, skilled, and doesn’t need anyone else to help her kick piles of undead butt. These traits are reflected in the game’s mechanics, most of which are an evolved form of what Castlevania players are probably familiar with. She can wield swords, axes, and magic with ease. Over the course of the game you’re going to kill thousands of skeletons, demons, and other monsters.

Shanoa’s design is impressively beautiful and restrained at the same time—at least compared to those of other video game heroines. She’s tall but slender with long dark hair, and her deep blue dress reflects the typically moody motifs of the Castlevania series. Her bronze breastplate has more practical curves; the maligned “boob armour” is thankfully absent here. 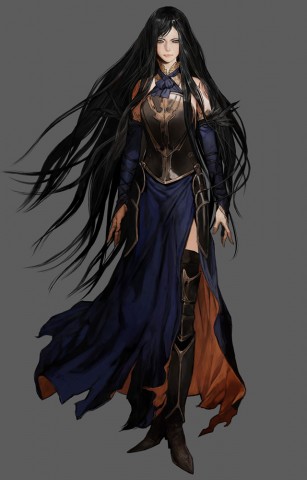 Her backless dress feels racy, but not necessarily vulgar. The reason for this is the tattoo on her back, which absorbs monsters’ powers, or Glyphs, granting her new abilities. That might not be an entirely satisfying explanation, but Shanoa still defies most of the male gaze-obsessed tics of video game character design. She looks more suited to walking a runway in Milan than at a wet t-shirt contest in Malibu.

At first glance, Shanoa may appear to be a Superfluous, Flimsy Character disguised as a Strong Female Character. She begins the game by losing her memory and is sent on her mission by orders from Barlowe, the wise old man. Her only other associate is Albus, an outlaw type with dubious morals. 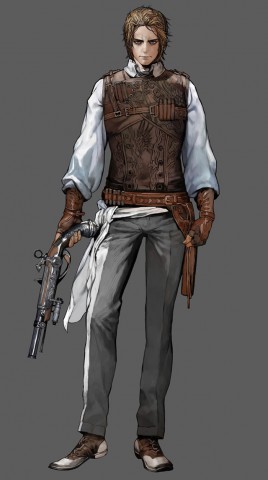 Shanoa’s relationship with Albus is interesting, mainly because it avoids many of the typical notes of a male-female lead duo. They were childhood friends, with Albus mainly playing the doting older brother. At the outset of the game, he betrays Ecclesia and seemingly becomes the villain.

Throughout the game you’ll run into Albus, who helps you on your quest for unknown reasons. Eventually it’s revealed that he wasn’t evil all along; he was working against Barlowe, whose hidden intention was to kill Shanoa and use her power to resurrect Dracula, rather than destroy him.

Despite Albus helping Shanoa along the way, she’s never entirely dependent on him. She’s the one slaying all the monsters and following Dracula’s trail, after all. Later on, the two begin to repair their frayed relationship, but it never falls into a forced romantic pairing. Albus is a crucial part of Shanoa’s character development, but his quest never supplants hers.

Over the course of the game, Shanoa, with the help of the player, takes control of her fate in an unambiguous manner. That comes directly from her role as the playable character.

Shanoa is inherently empowered in the context of the game in which she appears. Somewhat paradoxically, it’s her role as the player’s avatar that gives her agency and influence. In the same way that you can lead her to getting her face gnawed off by a bat, she can also slaughter every monster in her path, save the village of Wygol, punish Barlowe’s sudden but inevitable betrayal, and banish Dracula to another couple centuries of induced slumber.

(cool video: PBS Idea Channel on controlling vs. being your video game avatar)

IT TAKES A VILLAGE

While Shanoa, Albus, and Barlowe are the game’s only principal characters, a small village called Wygol fleshes out the world of Ecclesia with a surprisingly diverse supporting cast.

The villagers themselves are an eclectic bunch. Everyone is one kind of non-player character stereotype or another. What’s impressive is the variety—in their dispositions, motivations, and even body type. You’ve got a perpetually stoned herbalist, a well-dressed musician obsessed with finding the perfect tune, and an obnoxious journalist looking for the latest rumour about a mysterious Sasquatch roaming the countryside (this being a Castlevania game, of course it exists).

And two women arguably play opposite ends of the queer spectrum: There’s Monica, a prim and proper seamstress who feels immediately nervous when talking to Shanoa, and Laura, a buxom jeweller who openly flirts with Shanoa and is continually confused at our heroine’s lack of emotion. 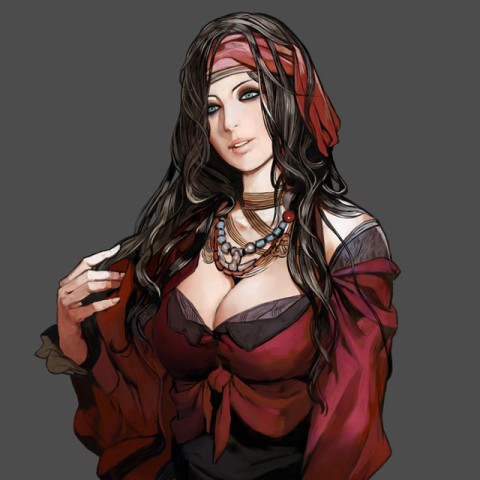 On their own, no single villager makes a memorable impression. But together they paint the picture of a world with people of different shapes and sizes, where everyone has a role to play and each conversation or task is of worth, both to the player’s progression and to Shanoa’s character development. In a game that’s part of a tentpole franchise like Konami’s Castlevania, this is a rare gem.

BETTER THAN THE REST

Playable female characters have appeared in Castlevania before, but Shanoa feels more fleshed out than the others. In 1999, Castlevania Legends for the Game Boy starred Sonia Belmont, the series’ first heroine. Sadly, her story was later dropped from the official Castlevania timeline, allegedly because at the time Igarashi didn’t like the idea of a woman protagonist set in the 1400s, though the main reason was probably the game’s mixed reception among critics.

Since then other playable female characters were usually relegated to supporting status, with the plot mostly revolving around a male lead. Maria was a young girl with magical powers rescued by Richter Belmont in Castlevania: Rondo of Blood; in Castlevania III: Dracula’s Curse, Sypha Belnades played second fiddle to Trevor Belmont; and while Charlotte from 2006’s Castlevania: Portrait of Ruin was a notable improvement, the plot is still mostly concerned with her partner Jonathan Morris’s taking up the mantle of lead Vampire Hunter. And the less said of the Castlevania: Lords of Shadow series, a parade of the dead wife trope, the better.

Order of Ecclesia’s representation isn’t perfect, though. Sticking close to its pseudo-European lore, every character is uniformly white: 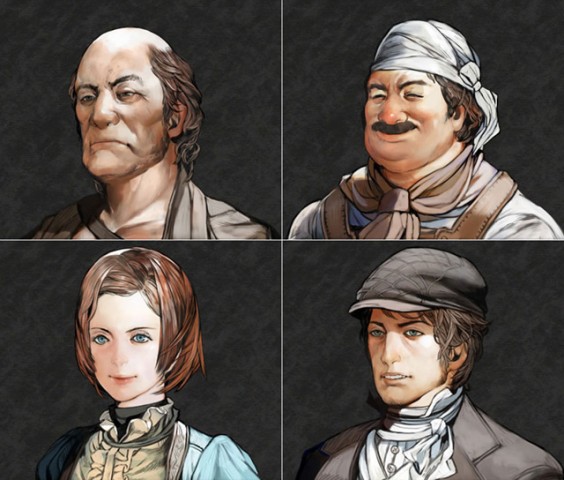 And Dracula himself isn’t much more than an eternally undead creep, first greeting Shanoa, who is on a Priority One Murder Mission, as a “lovely maiden.” Clearly he isn’t taking her seriously as the final boss fight begins: “Bah ha ha ha ha ha! What an amusing woman! Come to me, child; I haven’t danced in ages!”

It makes it even more satisfying when you defeat him, obliterating his castle as a result.

Shanoa in Order of Ecclesia has a complete story arc throughout the game’s plot; doesn’t play second fiddle to other male characters in a stereotypical fashion; and, thanks to the agency afforded to her as the game’s playable character, is responsible for her own actions that lead to a satisfying conclusion.

She’s a fantastic heroine who has no problem settling into a decades-long franchise and as such serves as proof that putting a women at the heart of a well-crafted traditional video game doesn’t have to be a publicity stunt. She just needs to be a well-written avatar for the player, just like any other Vampire Killer.

It helps that she also lays claim to one of the most powerful, badass lines in the entire series. As she first enters Dracula’s Castle, a beautifully rendered hall of horrors, Shanoa shouts to an unseen Dracula:

“Hear me! I am the morning sun, come to vanquish this horrible night!”

Jonathan Ore writes about arts and culture, usually with a focus on video games, comic books, and television. He’s an associate editor at Toronto-based nerd site Dork Shelf. He’s also social media, photo/video and arts & entertainment jack-of-some-trades at CBCNews.ca. You can find him on Twitter @Jon_Ore.