What is this, a movie for ANTS? 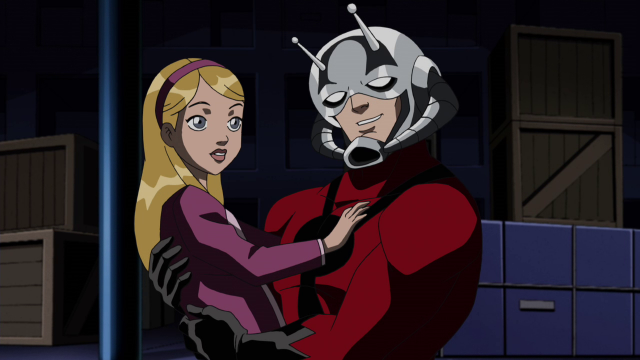 With the news out of Comic Con that Marvel’s Ant-Man adaptation will be establishing the only female founding member of the Avengers, the woman who named the team, as dead before the beginning of the story in order to provide emotional conflict for the rest of the mostly male cast, it’s tempting to wring any hope one can out of the confirmation that another female superhero is joining the film’s lineup. But in the case of Cassie Lang, it’s likely we’re simply looking at another female character who will provide motivation for a male one rather than having any of her own.

In a video interview with Screen Rant, published on Tuesday, director Peyton Reed answered some questions about the thematic arcs of Ant-Man and confirmed some months-old rumors about the movie’s version of Scott Lang (Paul Rudd), the second Ant-Man.

Thematic arc really is a sort of passing-of-the-torch movie… Rudd’s character is an ex-con, a thief. It’s also got the structure of a heist movie. And there’s also a real personal dynamic to the movie, too. In the comics, Scott Lang has a daughter, and that’s part of the movie, too.

Scott Lang’s daughter, Cassie Lang, is also known as Stature or Giant-Girl and has been a team member on various teenage Marvel groups, including the Young Avengers. But before she developed shrinking and growing powers in her adolescence, she was the young daughter of Scott Lang and a critical motivation in his first encounter with Hank Pym. A man who turned to crime when he couldn’t support his family as an electronics expert, Lang was released from his commuted jail sentence only to find that his daughter was dying from a congenital heart condition. His next, law-breaking, moves would bring him into contact with Hank Pym, Pym’s Ant-Man suit, and the life of a superhero.

It’s the Cassie Lang of Scott Lang’s origin story who is likely to appear in Ant-Man, rather than the teen superhero she’s been since around 2005. But at least now the known female comics characters in the film are a mere 33% dead, compared to 50%?