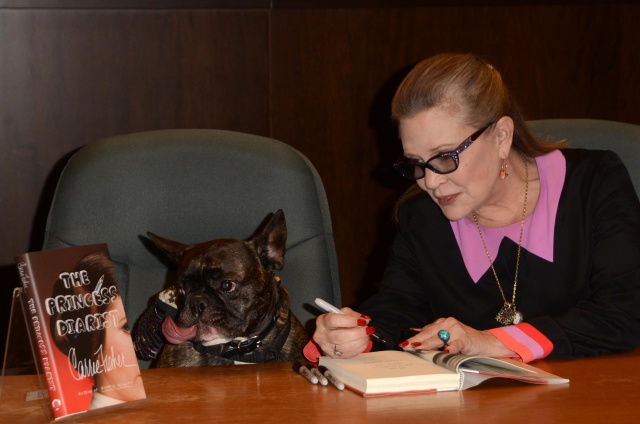 Carrie Fisher’s loss is something we are still processing, as people who knew her through her writing, her acting, and her wit. So to those who knew her best, there is no doubt the pain of her loss is still palpable.

Gary, a French bulldog, was Fisher’s constant companion before she passed. Anyone who went to photo-ops or book signings with Fisher saw him there, and I can speak from personal experience that he was the cutest and sweetest guy. Apparently, he was so well loved that he became a space creature in the latest film.

The late @carrieffisher‘s dog Gary just watched #TheLastJedi! He sat on Fisher’s former assistant’s lap during the film. She said his ears perked up every time she was on screen ❤️@starwars @ABC7 pic.twitter.com/2rCCGIi6Al

Gary now lives with Fisher’s former personal assistant, Corby McCoin, where he, like the rests of us, still thinks fondly of our beloved space princess/general.

How many times did you cry during The Last Jedi when thinking about Carrie Fisher?