Don't even think about it, J.J. 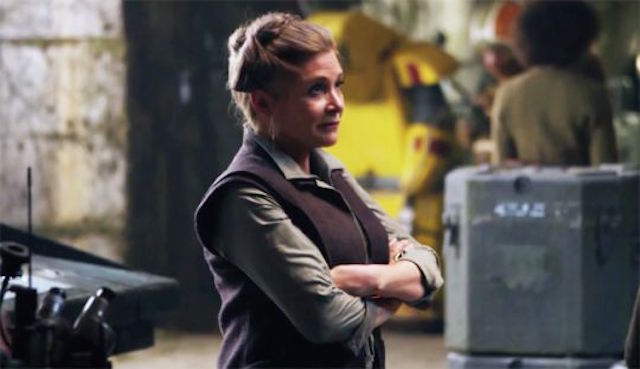 Leia was a great, lead female character in the original Star Wars films in a way a lot of modern movies still fail to pull off—with one big, gold asterisk.

I am, of course, referring to the “slave Leia” outlet that spawned a generation of fanboy fantasies at the expense of turning Leia herself into little more than titillation material for the opening of Return of the Jedi. However, Carrie Fisher is determined not to let that happen to this generation of Star Wars movies, and she let Daisy Ridley—with her role as Rey in the new sequel—know how she felt about it in an interview with both actors for Interview Magazine.

Fittingly, the interview kicks off with conversation about role models, during which Ridley mentions that she was really into Matilda, which leads to discussing Fisher as her “predecessor.” Then things get down to discussion of how both actors reject the idea of being “sex symbols”:

Ridley: “No, they always talk about how you’re a sex symbol, and how do I feel about that. [Fisher sighs] I’m not a sex symbol! [laughs]”

Fisher: “Listen! I am not a sex symbol, so that’s an opinion of someone. I don’t share that.”

Fisher: “Word for it? Well, you should fight for your outfit. Don’t be a slave like I was.”

Fisher: “You keep fighting against that slave outfit.”

Of course, it’s not that we’re averse to people being attracted to their fictional heroes, but there’s no reason to go overboard into objectification territory, and Fisher’s been vocal about her treatment as a woman, which we love. The whole conversation is pretty candid and worth a read, with the two also discussing what it’s like to become Halloween costumes:

Ridley: “I’ve seen some really cute kids dressed as Rey. I love that.”

Fisher: “My favorite is when you see, like, a month-old kid dressed as you, so that it looks like the mother swallowed your outfit when she was pregnant, and the baby came out like that. Now I get to have someone to talk about it with—you!”

Fisher also made a quip about how they’re represented in merchandising that sounds all too familiar: “Oh! I just got handed some pajamas that neither one of us is on. I think we should really get upset about certain things like this. It’s not sexist, but space-ist.”

You hear that, merchandising department? Leia finds your lack of Rey disturbing.