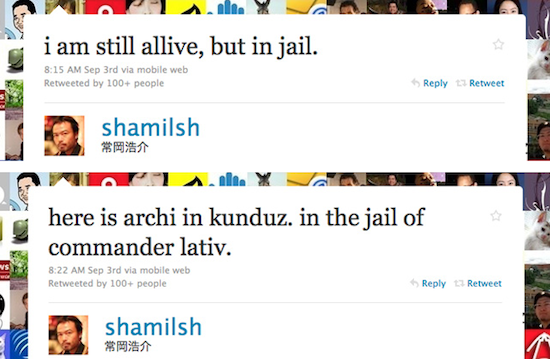 Japanese journalist Kosuke Tsuneoka had been held captive in Afghanistan since April of this year, with no means at his disposal to contact the outside world. When one of his captors asked him for help setting up his new Nokia N70 cellphone, Tsuneoka saw an opportunity: Under the pretext of demonstrating how Twitter works, he managed to tweet out that he was alive and the location that he was being held hostage.

The younger militants were more interested in accessing Al-Jazeera on the phone, but Tsuneoka managed to shift their attention to Twitter, successfully getting them to ask him to demonstrate how it worked.

“That’s how I got the message out,” Tsuneoka told a news conference in Tokyo on Tuesday, a day after he arrived safely back in Japan. “I’m sure they never thought they were tricked.”

Fortunately, Tsuneoka was freed from captivity this past weekend, although the tweets likely had nothing to do with it: Tsuneoka converted to Islam in 2000, which may help explain why his captors let him go. While the journalist says that his captors were “a bunch of thieves just trying to extort money from Japan,” both the Japanese government and Tsuneoka say that no ransom was paid in exchange for his release.