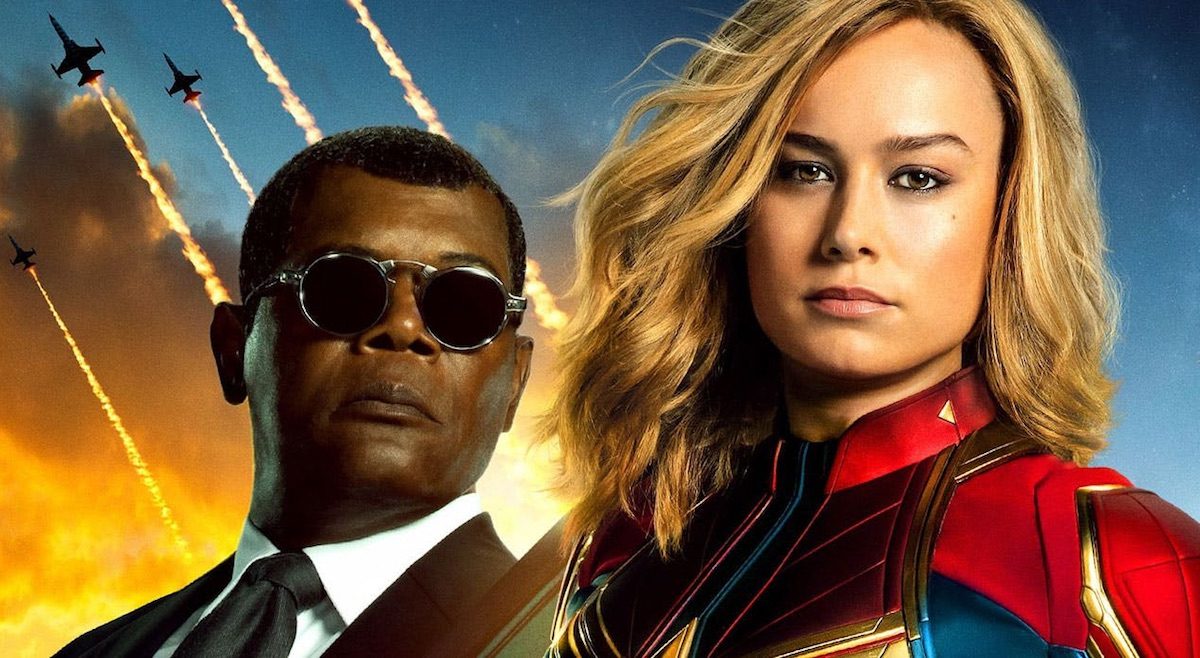 ***Spoilers for Le Capitaine Marvel and Avengers: Endgame ahead***

As the years go by, Marvel’s post-credits scenes seem to become more and more relevant to the plot of future movies. Initially, they were just a quick tease or a silly addendum, but these days, if you miss the post-credits, you’re potentially missing out on crucial plot points going forward.

Avengers: Endgame‘s post-credits introduced the world to the concept of Captain Marvel, as the desperate, soon-to-be-dusted Nick Fury sends out a distress call via their shared pager (which eventually lights up with Carol’s star insignia). Message sent—or received, we assume.

Then, in Ant-Man and The Wasp‘s post-credits scene, we see that Hope Van Dyne and her parents Hank Pym and Janet Van Dyne all succumb to the Snap. Scott Lang is left to languish in the Quantum Realm—and he’d just received a warning from Janet to be wary of time vortices. Not only did this set the stage for Scott’s survival into Endgame, but it provided the first solid proof that Endgame was going to utilize the Quantum Realm and might play around with time travel.

Even by these recent standards, Captain Marvel‘s first post-credit scene was a big deal. We flash over to the Avengers compound, where all of the living Avengers save my husband Thor, who is off buying me flowers, and Clint Barton, who is god-knows-where, are ruminating on the “nightmare” of the ever-mounting Snap body—erm, dust—count. Somehow they’ve recovered Carol/Fury’s pager and know that it was used by Fury as his last act. Likely whatever’s left of clandestine government agencies still figured Nick Fury’s abandoned car was worth investigating.

Rhodey Rhodes arrives to deliver news about the pager to Steve Rogers, Natasha Romanoff, and Bruce Banner, that “that thing just stopped doing … whatever it was doing,” meaning the pager seems to have stopped broadcasting. Message now definitely received. “I want to know who’s on the other end of that thing,” says Natasha, and when she turns around, Carol Danvers has appeared in the room.

Her hair is longer than the ’90s cut, and she appears distressed. Since Thanos Snapped away half the life in the galaxy, wherever Carol was—amongst Skrulls or Kree or somewhere else—that population was also affected. The worlds beyond Earth have been just as devastated, which may be why Carol didn’t return home immediately to investigate. “Where’s Fury?” Carol demands. And, scene!

Now, this is revealing for several reasons that we can speculate. We have relatively little information about Endgame, for all that it comes out next month, and can only begin to guess at the sequence of events. However, this scene would suggest that Carol joins up with the Avengers pretty early on—rather than saving her addition to the team as a last-minute Carol ex machina to punch Thanos all the way back to Saturn.

Some of us had also predicted that Carol would be the one to rescue Tony Stark (and Nebula?) from their imminent demise in outer space. This is still possible—maybe the Avengers tell Carol about Tony once they’re all on good terms, and Carol flies off to find him. But now that we know Carol is quick to respond to the pager and is likely to be involved on Earth, I’m thinking it’s more probable that Tony finds his way out of space in a different and entirely unexpected fashion.

We’ve likely seen a scene straight out of Endgame. Ant-Man‘s post-credits showed Steve and Sam Wilson talking to Bucky Barnes, his arm immobilized by a machine, and this scene would prove to be from Civil War. Seeing the moment of Carol’s arrival doesn’t feel like something Endgame will skip over with the assumption that everyone saw Captain Marvel‘s post-credits.

Of course, I could be wrong, but I think the Russos know we want to see Carol’s acclimation to the Avengers, and theirs to her. Will there be misunderstandings at first, perhaps a friendly fight before they come to know each other? We can dream. My kingdom for Captain Marvel and Captain America forging an ex-soldierly bond.

The end scene also tells us quite a bit about the Avengers’ condition going into Endgame. Everyone looks healthy and, well, clean. We can assume life hasn’t gone so totally on the fritz that there’s non-stop brawls in the streets and no time to do laundry. Yet the Avengers are clearly all on edge and emotionally devastated, and have probably exhausted a lot of their ideas at that point if they’re so focused on Fury’s mystery pager.

Then there’s the after-after-credits scene starring your favorite Flerken and mine, Goose the Cat. Goose stole the show in Captain Marvel, which the creatives likely predicted would happen, since they give him the last “word.” Aside from setting every single cat owner in audiences around the world on edge as Goose coughed up his “hairball”/Infinity Stone, why end the movie on that note? Was this just a humorous aside?

I think so (but tell me if I’m wrong and may be missing out on further clues). Goose’s unique hairball establishes how Fury and S.H.I.E.L.D. have the Tesseract during the events of The Avengers. The chain of custody is a bit murkier between the time that Howard Stark handed the Tesseract over to S.H.I.E.L.D. and Mar-Vell came to have control of it in the ’80s. We can assume that maybe she was granted permission to use it for the top-secret PEGASUS project, or maybe she “borrowed” the Tesseract, but that seems like a pretty big thing to go missing without sending up alarms. Either way, Goose’s final moment in the film shows how it ended up safe and sound in Fury’s possession.

Is it too much to hope that Goose is still chilling on Earth in cat-form, survives the Snap, and will make some sort of appearance in Endgame? You never know when a Flerken could come in handy.

What thoughts and questions arose for you during Captain Marvel’s post-credit scenes?