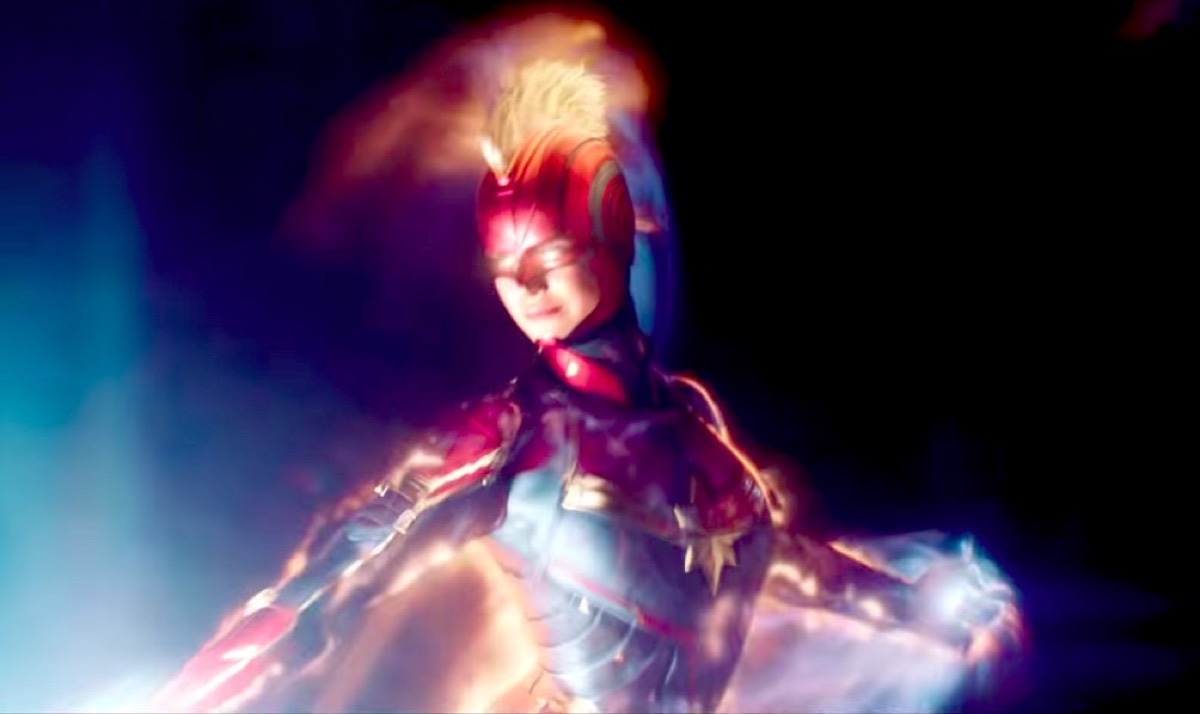 Carol Danvers (Brie Larson) says this at one point in the film, and indeed, she does go higher, further, and faster than some of the other heroes who have gone before her. There are a lot of expectations riding on Marvel’s first female-led (and first female co-directed) feature, and I am happy to report that the film does indeed live up to the hype. Carol does go high.

This is a Marvel movie, so discussing the plot is a bit of a minefield, and any spoilers will get me sent to Review Jail, so I’ll use the Disney summary: “Set in the 1990s, Marvel Studios’ Captain Marvel is an all-new adventure from a previously unseen period in the history of the Marvel Cinematic Universe that follows the journey of Carol Danvers as she becomes one of the universe’s most powerful heroes. While a galactic war between two alien races reaches Earth, Danvers finds herself and a small cadre of allies at the center of the maelstrom.”

Much to the impending displeasure of her detractors, Larson is a damn near perfect Carol. She’s funny, tough, and deeply compassionate. Larson conveys so much through a twitch of the lips or a change in expression, and I found myself deeply fond of Carol after knowing her for maybe three minutes. Don’t worry, haters, she smiles. More importantly, she’s empowering. I flat out wept at certain points.

The rest of the cast is perfect. Lashana Lynch was a scene-stealer as Maria Rambeau, and Samuel L. Jackson has a blast as a younger, less distrustful Fury. Ben Mendelsohn has an absolute ball as Skrull leader Talos. Annette Bening also has some serious fun as the Supreme Intelligence, and Jude Law delivers a characteristically solid turn.

Of course, Goose is also perfect. Get that cat a spinoff.

As a film, it’s a fun origin story. At two hours, it ends just as it’s starting to feel a little long, and the film keeps going at a decent pace for the entire run. It’s fun, and it doesn’t require you having studied the entire MCU, with the exception of a post-credits scene that will leave you screaming. Overall, it’s a strong superhero origin film, though I found myself more excited to see Carol grow as a character beyond her origin.

More importantly, it isn’t a giant trailer for Carol’s role in next month’s Avengers: Endgame. It stands as a separate film, with strong characters and a purpose for existing. It will hype you up for Endgame, if only for the possibility of seeing Carol fight Thanos and probably win. He’ll need those Infinity Stones to survive her.

Is it a perfect film? No, but is it a good and important superhero film? Yes. The first Marvel film helmed in part by a woman, written mostly by women, and centered on a female hero is empowering. Carol is fierce and funny and represents a movement of women who are, as Carol says in another trailer, tired of being told what they can’t do. She gets up and keeps on fighting, letting her power flow through her.

To see Carol at the height of her powers is an emotional thing in a franchise that once thought feminism was Black Widow crying because she couldn’t have children. The MCU has been getting better with female characters—Okoye, Hope, and Shuri all spring to mind—but it’s still a journey to try to get women to have fully developed arcs.

Carol gets to be a fully realized character. She is the beating heart of the film, and she gets to be her own hero. There is no last-minute saving of the day by a male character. Carol is not defined by men, or by gendered trauma. She is simply a hero.

I don’t need to implore you to see the film; the box office tracking records are doing well enough on their own. Still, go see it and admire the direction in which the MCU is going. If our new core characters for the franchise will be T’Challa, Peter, and Carol, then the universe is in good hands. I cannot wait to see where Carol’s story takes her next, and where she’ll soar to on her next adventure.

In the meantime, I’m counting down the minutes until I get to see this film again.