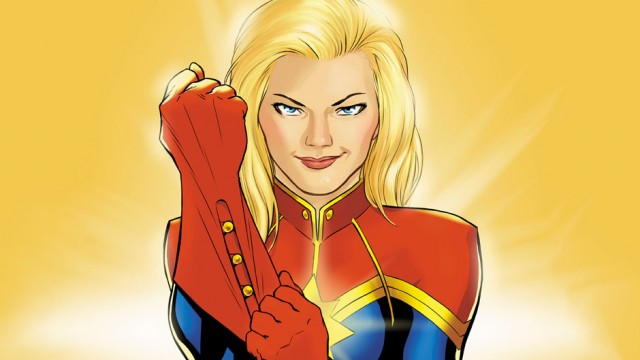 There is not a doubt in my mind that a Black Widow standalone film would have been incredible, and I would have loved it. I’ve enjoyed watching the way her character has developed in the Marvel Cinematic Universe, and in my opinion she is one of the best characters to grace the Avengers line-up so far—so I was disappointed and outraged along with half of Tumblr when Marvel didn’t include her in their ten-year plan.

But, as the red from my vision faded, I realized that I was actually happy with their decision to feature Captain Marvel first. It would be unforgivable if Marvel never made a Black Widow movie, and there’s absolutely no reason we shouldn’t have both Captain Marvel and Black Widow films. But when it comes down to the brass tacks of “who will be our first female lead?” I believe that they’ve made the best decision for a number of reasons.

The most obvious reason to me is storytelling: from a narrative standpoint, telling Natalia/Natasha’s story is complicated in a way that Carol’s isn’t. Widow’s origin story is tied up in Cold War-era sentiment—the Red Room, being a brainwashed Soviet spy, defecting to the US—and she’s never been able to escape her beginnings as many of her storylines, especially Nathan Edmondson’s excellent telling, revolve around her search for atonement. We see echoes of this in the MCU (“there’s red in my ledger,” for example), so it’s something moviegoers are already aware of.

From a script-writing point of view, it could be difficult (although not impossible) to fit a Black Widow narrative into the progression the other MCU films have taken, with each one contributing to the plot movement of the next. However, Captain Marvel fits perfectly into that motion; her powers are from an alien race, she is an interstellar superhero, and she’s capable of bridging the gap between the Avengers and the Guardians.

But, to me, the best reason why Carol Danvers is a better choice for being the first female-led Marvel film is that the movie has the opportunity to tell a more explicitly feminist story.

Before I starting hashing that out, let me state: I do not need every single woman in the movies I watch and the comic books I read to be a Wonder Woman-style “strong woman.” A significant part of the reason why I love Black Widow so much is that she’s not burdened by the often heavy-handed approach to Strong Female Characters; her power is much more subtle, and she is allowed to be a complicated woman without having to Represent All Women And Feminism.

However, translating her story to film faces some problems, as she is primarily a femme fatale and is almost literally a vagina dentate. I adore the fact that castration anxiety is central to Black Widow’s character (who doesn’t love “I know how you wanted this evening to go. Believe me, this is better”?), but I do have to admit to some anxiety of my own: I don’t trust Marvel not to bungle this.

Carol Danvers, while she could quite easily fall into the Strong Female Character trap, doesn’t have the same potential problems as Black Widow. What Carol does having going for her is a storyline that can’t be presented on-screen without talking about sexism.

Carol desperately wants to go to college, but when her father decides to send her brother (even though she’d surpassed him academically), she takes off and joins the Air Force; then, she does so well that she’s recruited into the CIA. She meets Mar-Vell while she’s working at NASA, then writes a bestselling book about being a woman in the space industry, which lands her a job at the Marvel-universe equivalent of Ms. Magazine. Even how she gains her powers is a feminist point: the Pysche-Magnitron device gives her Kree DNA because she wishes for the strength to protect others—she was done with having to stand by or be damseled—and if Marvel goes with Kelly DeConnick’s revision of her story, which it seems likely they will, some of the more deplorably sexist things that happen to Carol’s Ms. Marvel incarnation won’t be an issue.

Better than all of that, better than the fact that she’s practically the love child of Gloria Steinem and Chuck Yeager, is that she is a woman surrounded by women.

American culture has a problem with pitting women against each other. We judge each other on our clothes, our hair, our makeup, our weight—all in some invisible point system of being deemed worthy as a sex object. We’re urged to compete for male attention and romance, and we’re endlessly policing each other over how we talk, walk, breathe, dress, and have sex. Time magazine has received criticism for including “feminist” in their poll to ban words, but the whole list is racist and sexist, and demonstrates how much our culture despises women and girls.

Captain Marvel doesn’t engage in any of that. Helen Cobb is Carol’s hero. Carol herself is Kit’s hero, and encourages the young girl’s passions and dreams. She’s friends with Monica Rambeau, the first woman to bear the Captain Marvel title, and their relationship is depicted as respectful and team-based. They are both snark masters and their banter is hilarious, but their disagreements are settled through straightforward communication instead of cattiness and passive-aggressive hints. Tracy, her mentor, is fiery and blunt and takes no shit from anyone, including Carol. She has a whole system of support from the women in her life, including Dakota and Wendy and Spider-Woman. Her strength isn’t all from her Kree DNA: it’s from her choice to involve other amazing women in her life instead of trying to go it alone.

In the end, that’s the best thing about Carol Danvers. She’s not interested in tearing other women down or beating them. She relies on other women when she knows she needs to (a difficult thing for her character to admit), and she supports women and girls in their ambitions. She accepts her friends for who they are and what they feel are their limitations and boundaries, refusing to needlessly push them. She’s a hard-ass, and she has no patience for sexist nonsense, but she successfully straddles the often fine line between badass and bitch. And her movie is going to be amazing.

And, one day (hopefully soon) the Black Widow movie will be amazing, too.