HydraCap: So That’s the Explanation. Now What? 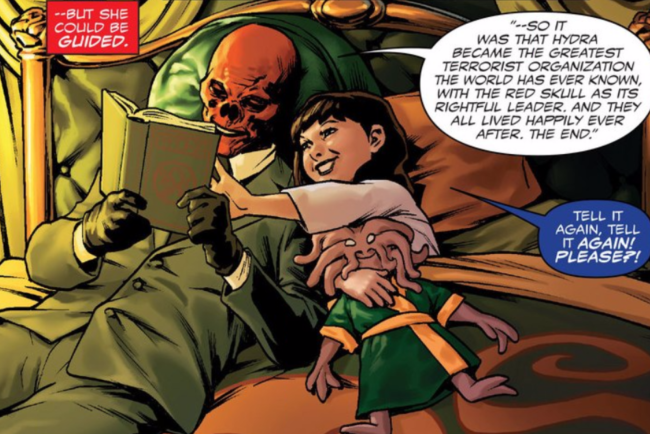 I had mixed feelings about the ending of Captain America: Steve Rogers #1. With this week’s Issue #2 from Marvel, we learn how it happened. What may be more important to readers, however, is why it happened and what it means for the story writer Nick Spencer is trying to tell. **SPOILERS FOR CAPTAIN AMERICA: STEVE ROGERS #2** 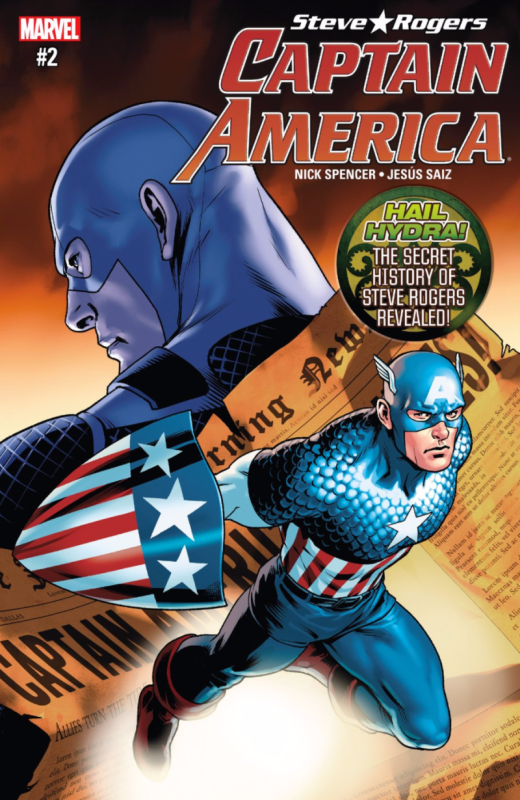 As I mentioned yesterday, the thing that turned Captain America all Hydra was what many suspected, a form of mind control. Steve Rogers’ memories of he and his mother being recruited by Hydra were planted in his mind by Kobik, the Cosmic Cube fragments that, thanks to S.H.I.E.L.D during the events of Avengers Standoff: Welcome to Pleasant Hill, evolved into a sentient four-year-old girl.

Kobik was created as S.H.I.E.L.D was secretly experimenting on fragments from the Cosmic Cube. The fragments became erratic and eventually merged into a single, confused entity that took the form of a child to symbolize that confusion. S.H.I.E.L.D used Kobik’s ability to imprison supervillains in a prison disguised to look like a quaint small town called Pleasant Hill, where Kobik alters reality in the minds of these villains, making them docile and keeping them in town. This is an idea that S.H.I.E.L.D commander, Maria Hill, came to of her own free will, highlighting the shady side that even an organization like S.H.I.E.L.D can have.

Now, it seems that Red Skull has taken control of Kobik, guiding her into thinking Hydra is awesome. For, you see, Kobik wants to be good, and has the power to seek out goodness and purity in people and things and bringing it to life. So, if Kobik is taught to think that Hydra is good and pure…well, you know how that turned out.

Hydra very definitely started as an organization that supported Nazis and the Empire of Japan that was created by Jewish creators in order to write about the events of World War II. However, Hydra has continued beyond that, being true to its namesake’s many-headed nature and finding a home in pretty much any administration, organization, or government that thrives on injustice, intolerance, and greed. Meanwhile, Red Skull seems less loyal to any particular regime and more loyal to his own power. He simply uses the regimes Hydra infiltrates to gain power in a way that suits his…sensibilities: 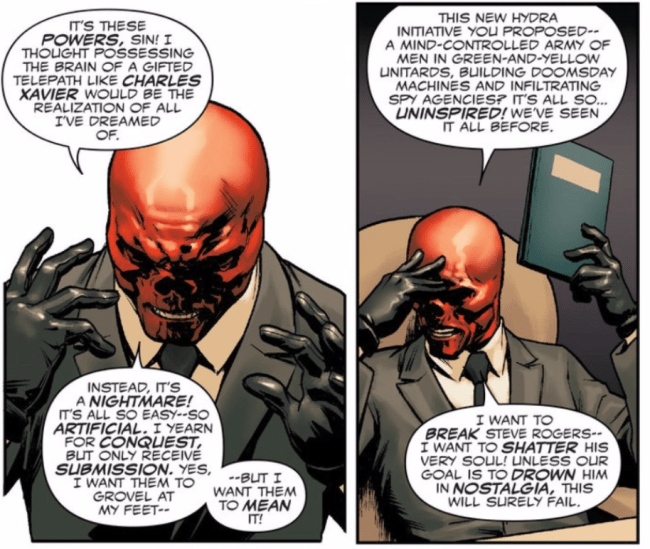 Red Skull and Hydra’s only true ideal is that Red Skull should control everyone.

These stories, in Avengers and in the Captain America titles, seem to be riding that line really hard — the line between actual ideals and the desire for power and control — by showing us that even those symbols and organizations we trust most, even those with “really good reasons for doing what they do,” have trouble distinguishing between those things. And so, S.H.I.E.L.D becomes an organization willing to take away people’s free will…for the greater good. Steve Rogers is shown to be a member of an organization that is against everything America supposedly stands for, even as he’s draped in the flag.

People may not be thrilled that this is happening to Captain America of all heroes, but at a time when a serious US Presidential candidate is an out-and-out sexist, racist homophobe, and “Brexit” passed because of anti-immigrant sentiments, we can see that people’s willingness to give up their own freedom in the name of “safety” is very real, and worth exploring in our fiction. Perhaps there needs to exist a Captain America that embodies the worst in us for a while — a white, blonde-haired, blue-eyed version that holds a mirror up to a majority of the people in the country, holding them accountable for their complicity in their own privilege — contrasted with a Captain America that continues to embody our best, in order for us to truly see that freedom is not something that can or should be given up, or taken away from others. It is something that should be protected and nurtured for everyone.