We ate too much candy. 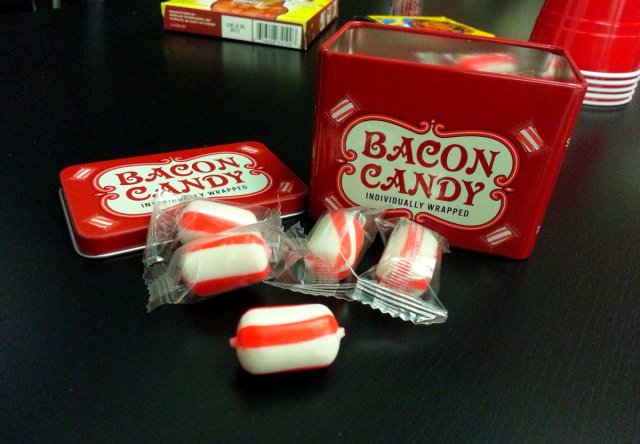 Yesterday the Geekosystem team took a field trip to Economy Candy here in New York City. It specializes in odd and vintage candy you’re not likely to find in most places. We stocked up on sweets that people probably aren’t going to be handing out for Trick-or-Treat tonight, and after tasting them, that’s probably for the best.

Economy Candy is where we found all those awesome bits of nerd candy we posted yesterday, but it also has a dark side. Take, for example, the item in the cover photo of this post. 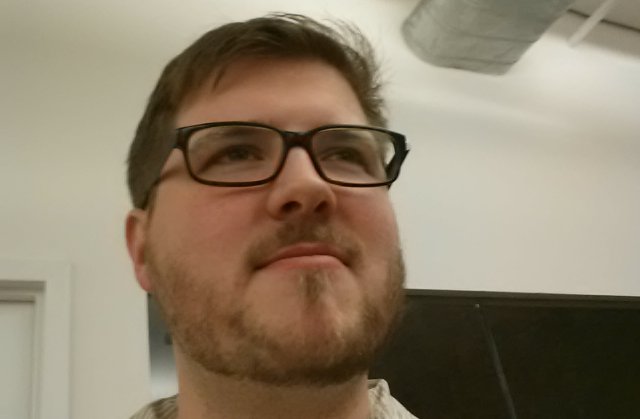 The Internet loves bacon, and we’ve seen “bacon flavored” candy and mints pop up on places like ThinkGeek for a while now, but this was the first and hopefully last time we tried it for ourselves. There’s an initial burst of an artificial smokiness that quickly fades, and all you’re left with is a sort-of-savory, not-sweet-enough piece of terrible-tasty candy.

None of us detected any real bacon flavor at all. That could be because there’s no actual bacon in the candy, just “artificial bacon flavor.” A key component that was missing is salt. We didn’t have any salt on hand at the office or we would have tried salting a piece to see if it helped, but we didn’t have high hopes for that plan succeeding anyway.

Our office manager, Taylor Trippe, was also not impressed with this brand of bacon candy either, but he assures us he’s had other bacon candies that tasted more like the real thing. We’ll take him at his word, but aren’t likely to continue our quest for bacon-flavored candy. 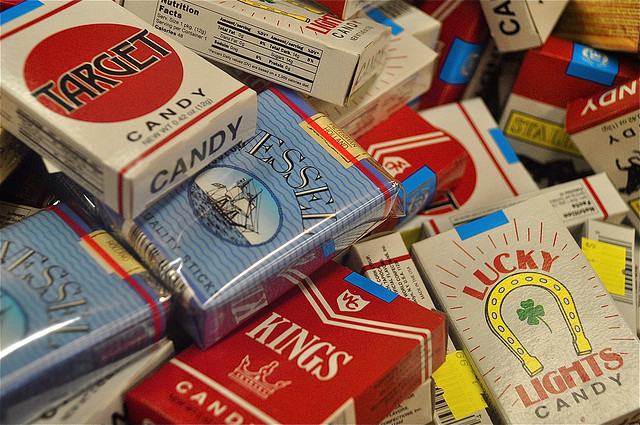 Smoking is bad for you, and candy’s not that great for you either. That’s why candy cigarettes have earned themselves a pretty bad name in the candy world. They’re hard to come by since people decided that giving kids candy cigarettes will make them want real ones too, but you can still get them at Economy Candy.

We even got the ones that let you blow powdered sugar smoke.

Cigarettes not your thing? You can also pick up a licorice pipe. Depending how you feel about black licorice, we either highly recommend them, or warn you to steer clear. 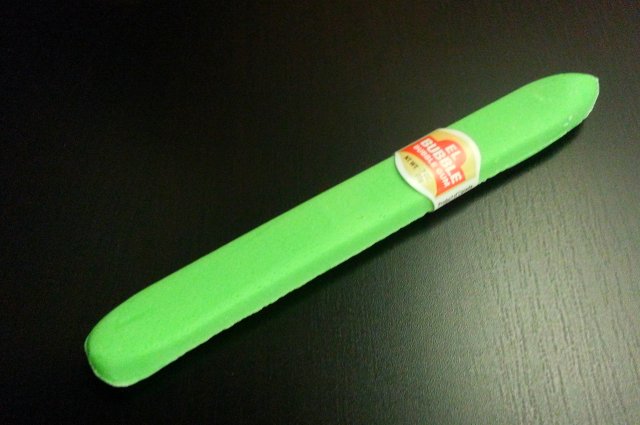 Unless someone on your block recently had a baby and is looking to get rid of the rest of a box of these bubble gum cigars, you’re not likely to get one in your pillowcase tonight. Besides falling under the category of “candified tobacco product” this is also an impractical amount of gum to try to fit in your mouth at once. 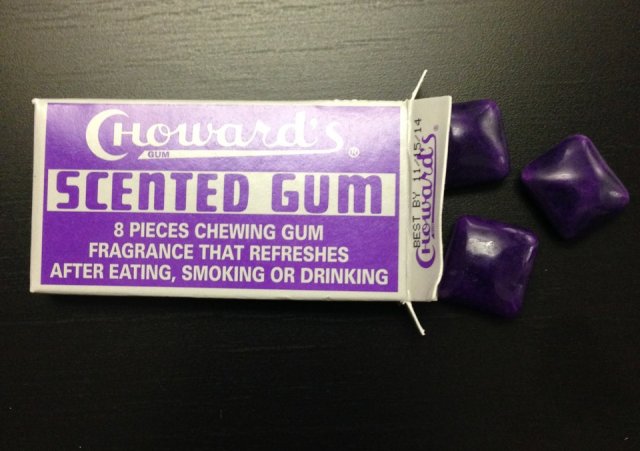 As our own Victoria McNally put it, the violet scented gum makes the inside of your mouth smell like an old woman’s house. The strong floral aroma and flavor is meant to cover up nasty smoker breath. We’re not sure if that really works, but it definitely makes you feel like you’re chewing on perfume. 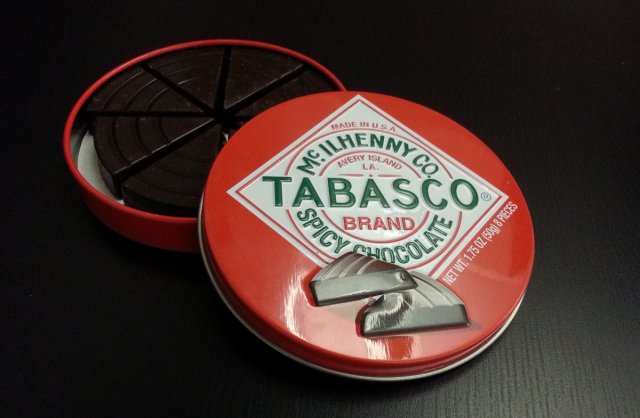 If you go out Trick-or-Treating, you will no doubt come home with an abundance of chocolatey treats, but we feel your chances of landing a piece of this Tabasco chocolate from a neighbor incredibly slim unless you live in the most esoteric hipster parts of Brooklyn.

Of all the weird candy we picked up, this was probably our favorite. It combines some quality dark chocolate with just a little bit of heat. The chocolate was delicious, but frankly the level of heat was disappointing. There was no real Tabasco flavor coming through, and you end up with just the faintest capsaicin tingle at the finish. Not bad, but we were expecting it to be a little hotter.

Time to step up the heat. 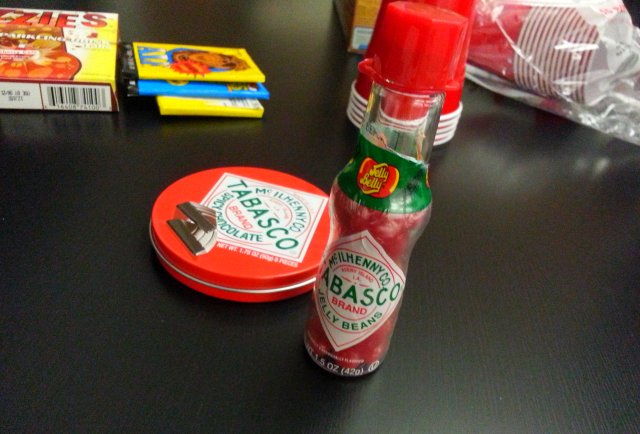 That’s the stuff. Besides being significantly hotter than the chocolate, these beans actually taste like Tabasco sauce. They’re mild enough to be enjoyed by anyone but the faintest of tongues, and we really dug them.

If anyone knows of any good Sriracha candy, please let us know.

Soda is abundant here in America, but maybe you feel the need to instantly create it from water wherever you are. That’s where Fizzies comes in. It’s a tablet similar to Alka-Seltzer that claims to turn eight ounces of water into a delicious fizzy soda beverage.

It does not do this.

We picked up the “Cherry Cola” flavor, which as you can see in the Instagram video above, quickly turns the water into a real unappetizing shade of brown. The bubbles are for effect only and don’t translate to any kind of satisfying carbonation, and the final product comes out more sour than sweet.

If you have a neighbor who hands these out on Halloween, you should start a petition to get that person to move.

The tablets look and smell similar to Willy Wonka Bottle Caps, which are delicious, so you might be tempted to skip the water altogether and pop one in your mouth.

Do not do this!

To demonstrate why, we asked our friend Colette McIntyre from The Jane Dough to do a taste-test with us.

Colette is no longer speaking with us, but not before she gave us these gems while the tablet was still dissolving in her mouth:

It’s living its own life in my mouth!
It’s like brushing your teeth with diabetes.
I don’t think we’re supposed to be doing this.
My whole tongue is brown! Are we going to be like this forever? 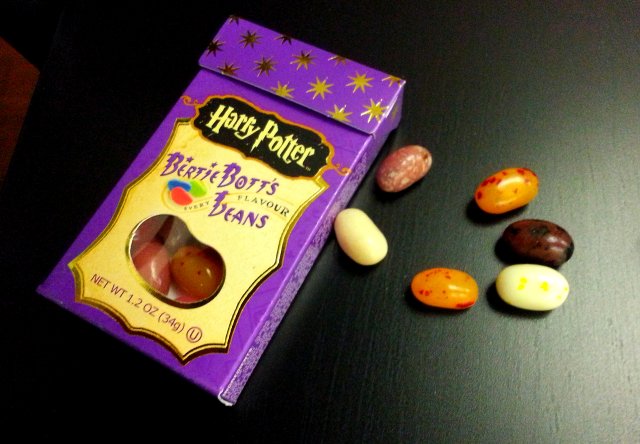 Harry Potter fans should be familiar with these, but for anyone else, the idea of these jelly beans is that they aren’t exclusively good flavors. There are the classics like cherry, blueberry, and even a cotton candy one. There’s also dirt, grass, and earwax.

What does earwax taste like? We had our new Associate Editor Dan Van Winkle try one. 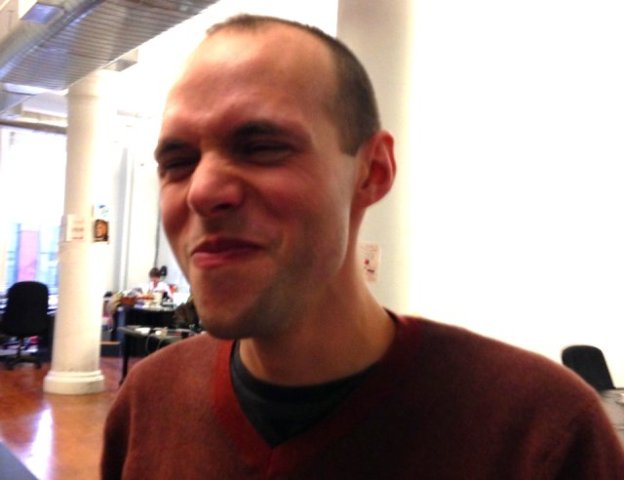 That’s not a good face.

Earlier in the day we asked Dan what the weirdest thing we’ve made him do for this job so far. At the time he said it was photoshopping Snoop’s head on Godzilla’s body, but we think we have a new favorite.

It’s not impossible that you’ll score these while Trick-or-Treating, but they’re not as easy to come by as they were at the peak of Potter-mania, so don’t go out tonight counting on getting yourself a sausage-flavored jelly bean. And it may have been a fluke, but we feel like the pack we bought skewed heavily towards the gross flavors. 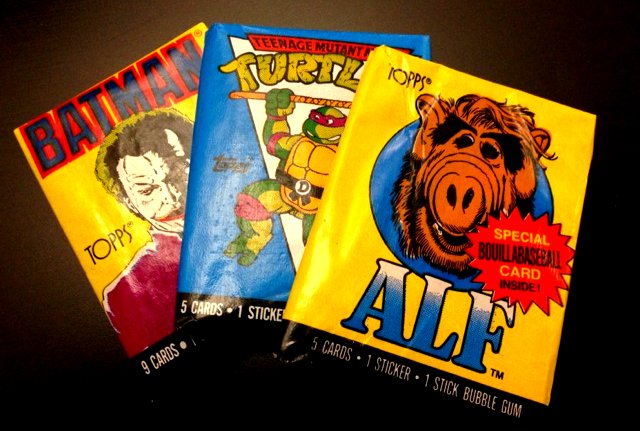 One thing we were excited to see at Economy Candy was the collection of vintage trading cards for sale. We each picked a pack of cards with gum inside to see how well it stood the test of time loosely wrapped in wax paper next to cardboard scenes from Alf.

You know how when you first put a piece of gum in your mouth, there’s a few moments before it really coalesces itself into gum? Really old gum never does that. It just falls apart and tastes like sweet chemicals. The texture is unsettling, but that shouldn’t take away from the truly disgusting flavor.

The oldest pack was the Alf cards from 1987, and something happens to a piece of gum over the course of 26 years that turns it into something truly vile.

If you happen to come across a vintage pack of collector cards from a movie or show you love tonight, rejoice! Then IMMEDIATELY throw the gum into a burlap sack and bury it in the yard. It’s the only want to make sure it stays dead.

We had a lot fun eating things we probably shouldn’t have, but we’d like to remind you that you can buy good candy at Economy as well. Have a Happy Halloween everyone, and feel free to send us photos of the weirdest candy you get Trick-or-Treating tonight!

(Thanks Economy Candy, images our own)