Power an Electric Candle With a Regular Candle Because You Can 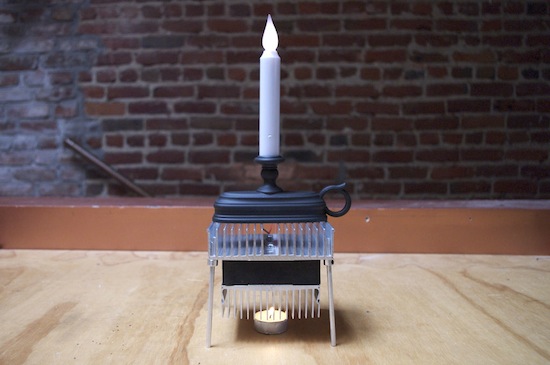 Instructables Technology Community and Content Manager Randy Sarafan posted a guide for building the Candle-Powered Electric Candle on Sunday and instantly became our hero. The description on the page says the project came about when Sarafan considered his own emergency preparedness in the wake of massive power outages in New York and New Jersey from Hurricane Sandy. Sarafan lives in San Francisco, which he acknowledges could be overdue for an earthquake.

The construction looks simple, only a few holes to drill and some aluminum rods to cut. The parts are also easy to come by. The main item that makes this thing possible is the Peltier heat sink assembly, which isn’t necessarily something most people have lying around, but Sarafan includes a link to where one can be ordered online for about $30.

The heat sink normally uses electricity to cool electronic components like a computer processor, but in this case uses the Peltier effect to convert the heat energy from the candle into the electrical energy that powers the electric candle.