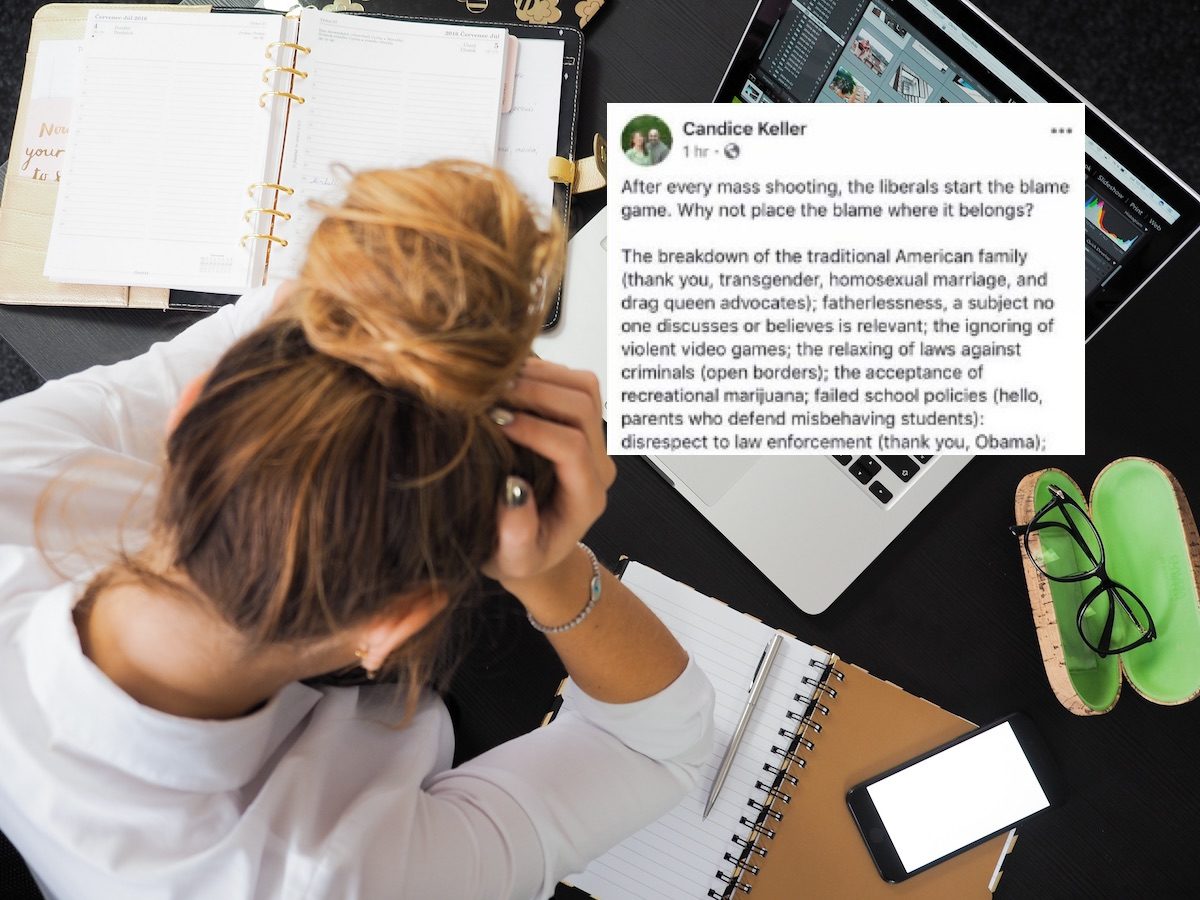 As the nation grapples with a reality in which we have two mass shootings within 24 hours, some conservatives have taken the time to blame anyone but radicalized white supremacists emboldened by the administration’s violent language. Ohio state representative Candice Keller ranted on Facebook about how “drag queen advocates” and immigrants are the reason for the shooting in Dayton, and her post has since gone viral. While the post has been deleted, you can still find it on social media, such as in the tweet from Ohio city councilman Chris Seelbach.

And marijuana.
And “transgender”
And “drag queen advocates” ME AGAIN!
And Obama
And Open Borders.

“After every mass shooting, the liberals start the blame game. Why not place the blame where it belongs?

The breakdown of the traditional American family (thank you, transgender, homosexual marriage, and drag queen advocates); fatherlessness, a subject no one discusses or believes is relevant; the ignoring of violent video games; the relaxing of laws against criminals (open borders0; the acceptance of recreational marijuana; failed school policies (hello, parents who defend misbehaving students); disrespect to law enforcement (thank you, Obama); hatred of our veterans (thank you, professional athletes who hate our flag and National Anthem); the Dem Congress, many members whom are openly anti-Semitic; the culture, which totally ignores the importance of God and the church (until they elect a President); state officeholders, who have no interest whatsoever in learning about our Constitution and the Second Amendment; and snowflakes, who can’t accept a duly-elected President.

Did I forget anybody? The list is long. And the fury will continue.

That last line is vaguely threatening in the context of two mass shootings by angry young white men.

The El Paso shooter left a manifesto that proclaimed him to be a racist who was radicalized by the same words and turns of phrase used by conservative pundits and politicians. He was not radicalized by a video game, or by the acceptance of gay marriage. He left a clear message as to who he was and why he committed the atrocity that he did. The Dayton shooter allegedly had no political motive, but his classmates spoke of him making hit and “rape” lists for fellow students.

To blame “liberals” or “snowflakes” is to miss the point entirely. It’s passing the blame, and in fact blaming many people who’ve been directly targeted by mass shooters. The culture of toxic masculinity, and the white supremacist ideology that is present in this country, espoused on a national stage by the President, are the root problems. Conservatives would rather pass the blame than look at these root causes though, which results in politicians going on these ill-advised rants on social media.

Keller is partially right about one thing, however: state officeholders have no interest in dealing with the Second Amendment. They’re more concerned with protecting the concept of the Second Amendment and taking NRA cash than dealing with the fact that assault weapons are being used to murder mass amounts of people on a regular basis. This problem is uniquely American. So yes, Ms. Keller, we should be concerned with the lack of attention being paid to the Second Amendment and why a new amendment should be passed so that these shootings stop happening. But this country can’t even get common-sense control measures that are popular with the huge majority of Americans passed, so excuse us while we don’t hold our breath.

Keller is facing pushback from other Ohio politicians, even Republicans, according to the Washington Post. Hopefully, her poorly timed, grossly worded social media post will lead to her stepping down, as these views are deeply harmful and should not be held by someone in the state House of Representatives.