Can We Still Root for BoJack in BoJack Horseman? 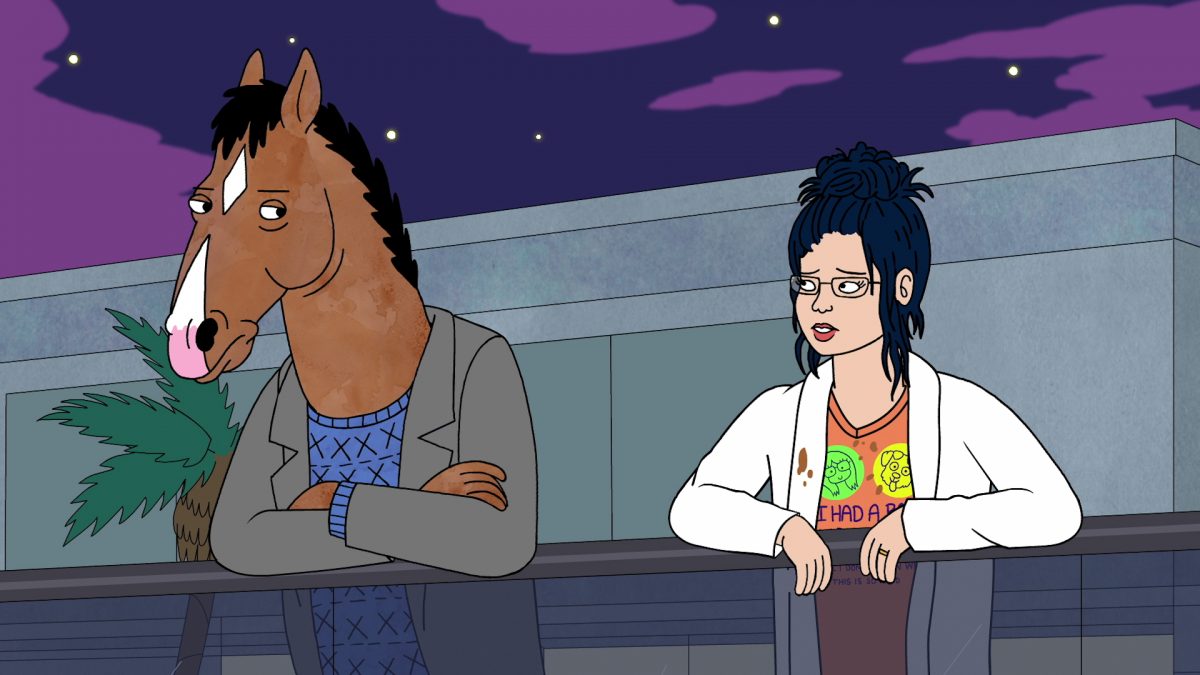 Each season, BoJack Horseman challenges us to ask ourselves how far is too far before we stop rooting for BoJack to do better? Even more than the incident in New Mexico, this season challenges us to see who BoJack really is and who are the victims of his bad behavior.

In season five, we see BoJack become addicted to pills initially prescribed to him due to an injury on set that broke his back Bane-style. It is revealed in an episode with Hollyhock’s return that he has now been faking his pain in order to get more pills. His addiction and reliance on them is so strong, he purposefully gets into a car accident in order to justify his continued use of taking pills for pain. In light of all the deaths via overdose that have been happening in real life, that scene was especially poignant in showing just how far BoJack will go in order to cope. We’ve seen BoJack on drugs before, but this was another level.

Towards the latter half of the season we see BoJack’s addiction grow to the point where he’s hiding them in different places, taking fistfuls at a time, and due to also filming this weird neo-noir show, Philbert, is starting to become paranoid and disconnected from reality, unable to tell what is the show and what is not–very reminiscent of the anime Perfect Blue.

BoJack has also been dating his co-star on Philbert, Gina (voiced excellently by Stephanie Beatriz) and they are living together. Gina finds BoJack’s drugs and confronts him about it. He punches a hole in the wall and grabs her wrist so hard it hurts her. She leaves and tells BoJack to get help or not, but she’s leaving, putting an end to their romantic relationship. At work, in the midst of a drug spiral on set, unaware of what he’s doing, he strangles Gina for real during a scene and has to be pulled away from her by Mr. Peanutbutter and other crew members.

It is a powerful and chilling scene because we’ve seen BoJack do messed up things to women, being sexually and emotionally manipulative, but never physically abusive. But the sad reality is that all of BoJack’s prior bad deeds were always leading up to this. Not because BoJack is inherently bad, but because he is a self-destructive addict who has had people, including Diane, make excuses for him and protect him from worse things. Now he’s cross this line and there is no telling if he can even come back from that.

When the footage of BoJack choking Gina comes out, not only do the higher-ups look to clean it up but Gina herself, finally getting some notable attention for being an actress tells BoJack: “I don’t want you to be the most notable thing that ever happened to me.” BoJack gets away with his abusive behavior, even though the show ends due to Todd’s sex robot CEO. (I love this show.) But there is no denying the damage has been done, not just to BoJack, but to Gina who now has to live with both the abuse and the cover-up.

Raphael Bob-Waksberg, the series creator, says in BoJack Horseman: The Art Before the Horse that the “germ of the idea” for BoJack as a character was “to create this guy who’s had every opportunity for success, but still can’t find a way to be happy.” At this end of this season, I found myself asking for the first time since New Mexico, “Does BoJack deserve to be happy?”

BoJack is a screwup, and even though Diane says, “There’s no such thing as bad guys and good guys! We’re all just guys!” I still can’t help but think how the scales for BoJack are very much leaning down towards the bad stuff he’s done, especially to the women in his life. We know the root of that comes from his relationship with his mother, but how long is this supposed to go on? Healing and recovery is a process, but at the same time, a person has to work towards getting better. Especially when they see how their actions are hurting people. BoJack says he deserves to be punished for what he’s done, but that’s because even in punishment he’ll get attention. To actually work towards getting better … that is a real punishment for BoJack.

When Diane takes him to rehab at the end, it’s such a mixed moment emotionally. I’m glad that this character who I’ve enjoyed and watched struggle for so many episodes is getting help, but again, here is another woman in BoJack’s life giving him so much more than she is getting back from him. He’s working towards being a better person, but he’s also managed to skirt public responsibility, again.

There’s so much talk about “when do we let men come back after fucking up,” but I think this season of BoJack showed that men have been allowed to “fuck up” forever and women have kept quiet because they didn’t want to be turned into just another piece of his narrative. Yet they carry the scars forever. Sarah Lynn is dead, Penny is still dealing with what happened on the boat, Diane spends more time fixing BoJack than herself, and Princess Carolyn nearly gives up her chance to adopt to deal with BoJack’s screw-up. BoJack is on the road to healing, hopefully, but Gina’s neck still has bruises. Who’s checking on her?

How emotionally wrecked are you after season five of BoJack Horseman and can you still love its title character?