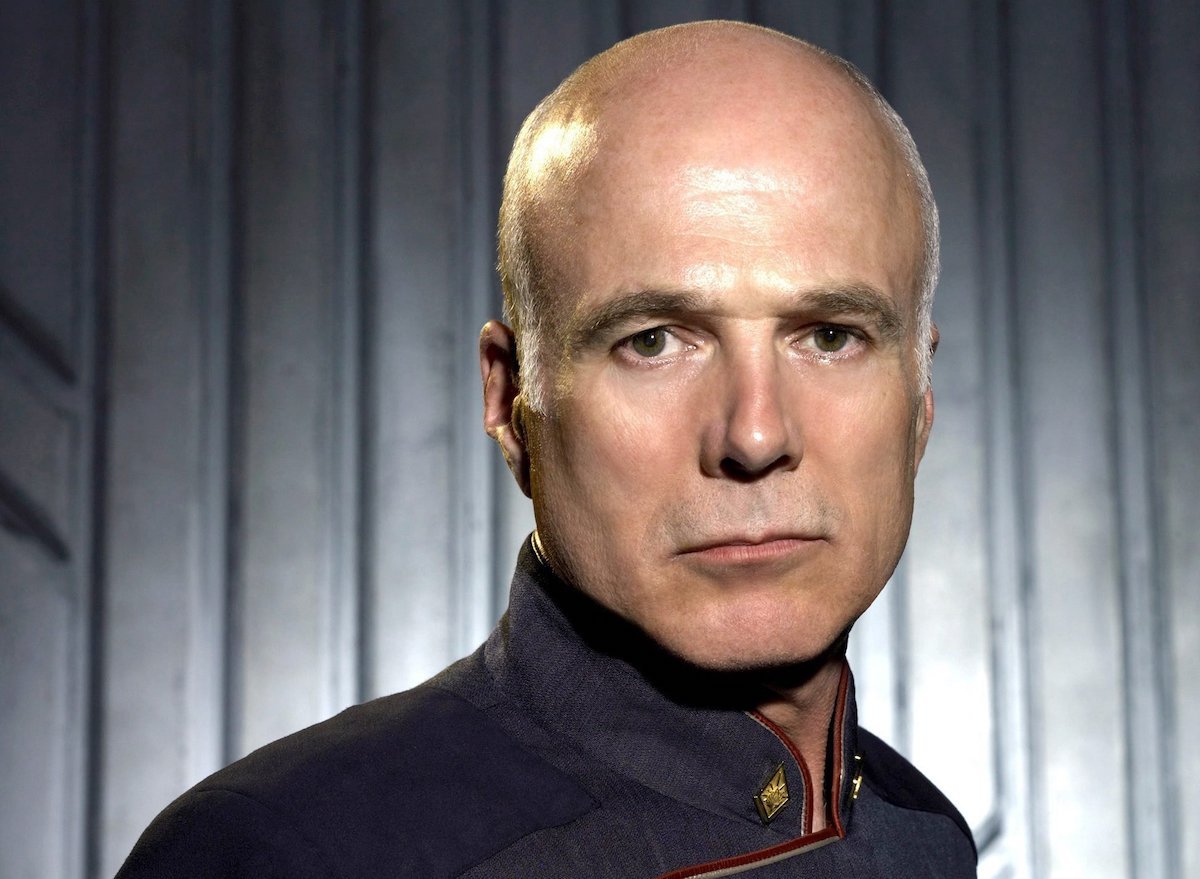 Earlier this week, we linked to the GoFundMe fundraiser for Canadian actor Michael Hogan, one of the more recognizable faces out there for genre TV watchers. I haven’t been able to stop thinking about how this vibrant actor who lent his talents to so many shows I love has been affected by a fall that resulted in a horrific brain injury and paralysis. Genre fans are a group that can do amazing things when we set our minds to it—and right now, Hogan and his family need our help.

If you’ve watched movies and TV since the 1970s, you’ve seen Michael Hogan’s face. If you play video games, you’ve heard his voice in games like Mass Effect 2, Fallout: New Vegas, The Elder Scrolls V: Skyrim, Mass Effect 3, and TERA: Rising. He’s also tread the boards on stage and performed in numerous radio dramas. Hogan—who by all accounts is a lovely man—particularly excels at playing morally ambiguous characters and villains.

He often stole the show on Battlestar Galactica in his best-known role as Colonel Saul Tigh, Galactica’s gruff executive officer. Teen Wolf viewers will recognize him as Allison Argent’s werewolf-hunting grandfather, Gerard. Hogan has guest-starred on so many beloved shows we cannot list them all, but here are a few: The Outer Limits, Millennium, Due South, Earth: Final Conflict, Monk, Andromeda, The L Word, Robot Chicken, Warehouse 13, Dollhouse, Numb3rs, Psych, Smallville, Supernatural, The Mentalist, Fargo, 12 Monkeys, Falling Skies, The Man in the High Castle, Criminal Minds, The Magicians, The Chilling Adventures of Sabrina, and many more.

It’s difficult to find a show that wasn’t graced with Hogan’s memorable presence. A man who has given so much to audiences over so many decades has had his life drastically altered by an accident that occurred while he was in Vancouver for a Battlestar Galactica convention.

Over at GoFundMe, Hogan’s friend and organizer Shari Ulrich shared the story of what happened in the words of Hogan’s wife of more than thirty years, the actress Susan Hogan, with whom he has three children.

You probably know Michael as an actor. Or maybe you know him as a friend, an acquaintance, a co-worker, a father, a grandfather, or a husband. My husband. I am Susan Hogan and I am married to this extraordinary man. We have been each other’s best friend for decades.

On Feb. 17, 2020, everything changed drastically in our world. Michael was in Vancouver participating in a Battlestar Galactica convention, and at dinner following his day’s work, he fell and hit his head. Hard. He went to bed that night not realizing that the impact had caused a massive brain bleed. He was unable to be woken the next morning and was taken to Vancouver General Hospital and emergency surgery performed. It took 57 staples to close the part of his scull they had to remove in order to reach the damage.

The accident left him with complete paralysis on his left side, memory loss, cogntivie impairment and an inability to swallow. Then things became incredibly more difficult during the COVID pandemic with visits by family being restricted then denied and no care team (physiotherapist, OT, speech therapist, etc. ) allowed in.

What happened with Hogan is awful, and the compounded impact of this occurring during the initial COVID-19 chaos must have been unbelievably difficult for everyone involved. The continued restrictions on visitation must also be grappled with, since “recovery [is] relying heavily on contact with family as critical members of the health care team […] the agony of separation is indescribable.” And the longer-term repercussions are harrowing.

On June 18th Michael was moved into The Berkley Care Centre in North Vancouver. Susan is allowed limited supervised visits – socially distanced, no contact, no touching, not even a smile can be exchanged given the mandatory face masks. For someone with a brain injury that face, that smile, that contact with a family member is critical grounding for them. To be denied that is torturous.

Susan has finally been able to find and get permission for a physiotherapist to go into the facility 2 or 3 times a week. Michael still cannot stand and needs an overhead lift to be moved from the bed to the wheelchair. He still requires a feeding tube into his stomach. He has regained his speech and is largely coherent and cognizant but there is a long long road ahead.

Though it is hard to imagine, I think it’s fair to say it is unlikely Michael will be able to work again but he is ONE TOUGH guy, so it also wouldn’t surprise me if he found a way! But for these past seven months, Susan has also been unable to work, given the circumstances . She is facing an uncertain future to navigate other than knowing that the financial demands will continue to be great.

There are the known costs of the Long Term Care facility, a customized wheelchair, a private physiotherapist to tend to him there, and ongoing costs of medications, foot care, adaptive clothing etc. And if he’s able to come home which would be far preferred – an overhead lift to move him from bed to wheelchair, a hospital bed, ramps, one to two live-in care-aids, renovations to accommodate the wheelchair including doorways and bathrooms, and a vehicle to accommodate the wheelchair.

As I’ve said, genre fans can be a wonderful force for good, and at current, the GoFundMe for Hogan has raised more than $250k toward its goal. But this is a moving goal, as longterm care for Hogan will remain a considerable financial demand on his family.

Our amazing XO has been fighting for months now. Michael Hogan is one of the dearest, funniest, most talented men I know, and is going through an incredibly challenging time. Here’s where we all can help him and his family #BSG https://t.co/WaQaYivmdt

It’s all but impossible to imagine the television landscape without Hogan there to bring compelling new roles to arch and energetic life. But as Ulrich says, Hogan is “ONE TOUGH guy,” and I’ll not count out seeing him onscreen again. While we hope and send our best wishes for Hogan’s recovery, let’s thank him for everything he’s contributed to our communities by helping out now if you can. You can give any amount on GoFundMe, and some fans are including messages with their donations that are making their way to the Hogan family.

In an update on September 22nd, Ulrich wrote:

Needless to say, Susan is overwhelmed and moved beyond words by the response. I am printing out your heartfelt messages for her to share with Michael when she visits him on Thursday, which will also be when he first learns of this initiative. Your words of care, appreciation and love, hold the true value of the results of sharing his story with his friends and family.