Banksy Arrest Hoax Is The Banksiest Thing To Ever Banksy

This will look nice when it's framed. 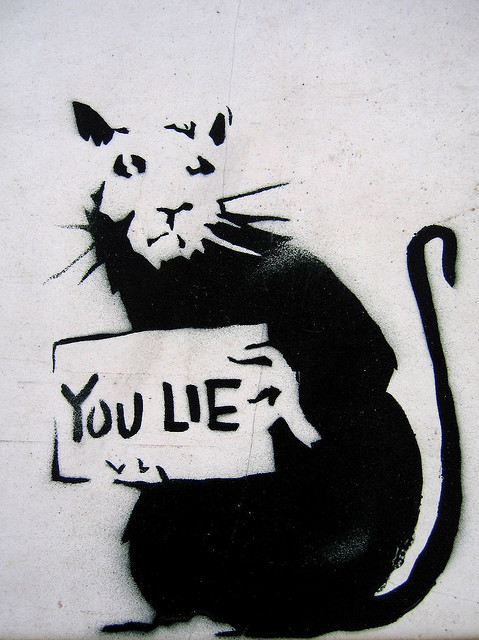 Reports of Banksy’s arrest have been greatly exaggerated. The Internet revealed its collective fascination with the enigmatic street artist earlier today, when a story published in the American newspaper The National Report claimed that the artist had been arrested by London police and was being held “without bail on charges of vandalism, conspiracy, racketeering and counterfeiting.”

In addition to alleging that the artist had been arrested, The National Report also claimed Banksy’s studio was raided by officials, revealing “thousands of dollars of counterfeit money along with future projects of vandalism.” The anonymous artist was also “revealed” to be one Paul Horner of Liverpool.

Banksy’s publicist quickly debunked the claims, telling The Independent “The Banksy arrest is a hoax.” Given the artist’s talent for subterfuge, I might believe at least part of the arrest story if The National Report wasn’t just a less-funny version of The Onion. Yep, TNR is a satirical news site that has a history of fooling Fox News and other mainstream media outlets with fictional stories that tap pretty accurately into the (about to use an asshole word here) zeitgeist–in August, the outlet reported that a Season 6 of Breaking Bad was in the works, and last month they alleged Facebook would begin charging users. “Paul Horner” is reportedly a stock named used frequently by TNR.

If nothing else, the Internet’s collective indignation over the imagined arrest is an indication into Banksy’s value to many people, as both an artist and a mystery.

There’s a new #Banksy in #Bristol. The Girl with the Pierced Eardrum is near Bristol’s docks. http://t.co/gdtJbdf8Nh pic.twitter.com/nYJhDyBJt4