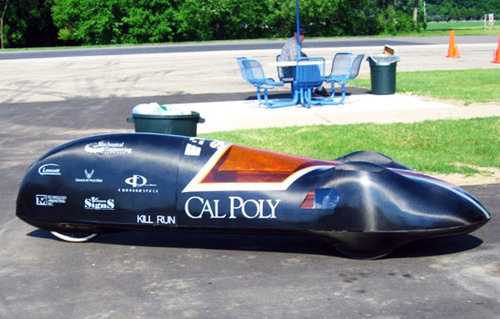 For nearly seventy years, Shell has sponsored the Eco-Marathon, a race not about getting there the fastest, but getting there most efficiently.  Winners are the vehicles that can go the furthest on the same amount of fuel.  For the past three years, California Polytechnic State University‘s entry, the Black Widow, has placed either first or second.  The 2010 Eco-Marathon kicks off at the end of next month, and the 2010 Black Widow is ready to roll.

The tiny streamlined car (we would like to draw your attention to the normal sized trash can sitting behind it in the above picture) weighs 96 pounds, has three wheels, three horsepower, and a top speed of about 30 miles per hour.

Gizmodo’s Kyle VanHemert writes: “The Black Widow may not be the fastest car or the most powerful, but it will almost certainly get you where you need to go.”  As an experienced driver of a Prius, this writer would have added “as long as there aren’t any really steep hills.”  Best of luck to the Cal Poly team!