Caitlin Is Not Groot: Finding Proper Communication Adaptations in Science Fiction and Fantasy 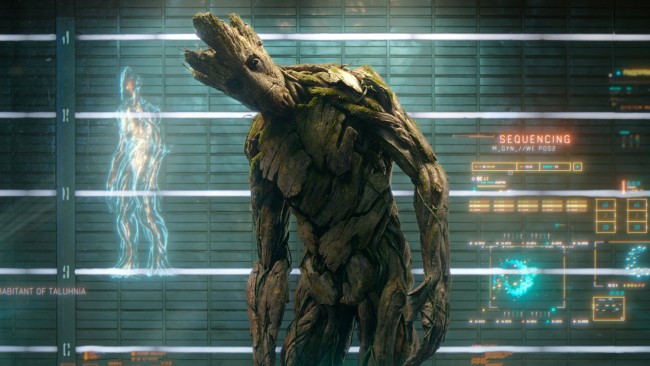 Our daughter Caitlin is 14, and she’s deeply fond of nerdy things: Doctor Who, the Marvel Cinematic Universe, Harry Potter, Star Wars. She is firmly capable of never getting tired of The Princess Bride. Right, now, she’s particularly enjoying the Guardians of the Galaxy movies. 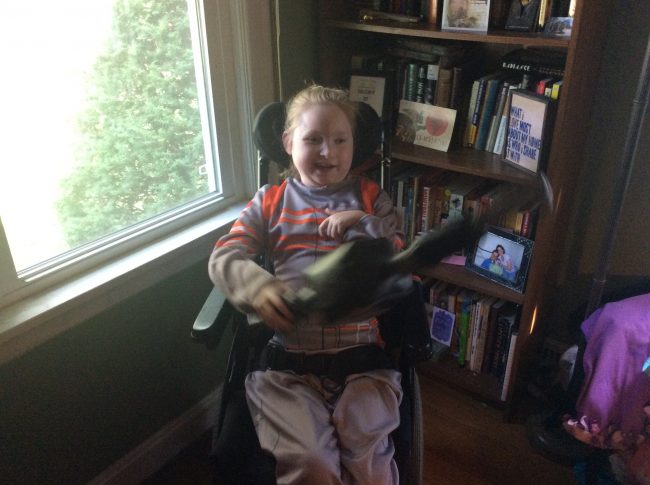 Caitlin. (photo: courtesy of the author)

She also has Aicardi Syndrome, a rare congenital neurological disorder. Her daily life involves a series of adaptations, including using a wheelchair and being tube fed. Caitlin is nonverbal, but she is absolutely capable of communicating and being understood. Our entire family benefitted very early on from a series of speech therapists who firmly believed that Caitlin was absolutely capable of communication; it was just a matter of finding the method(s) that work for her. We tried a lot of them, and what we ended up with is a mix of Caitlin making choices from a field of 2 items held in front of her, a modified version of American Sign Language, and shaking her head no or making kissy noises for yes, along with several other quite clear facial expressions for particular occasions. (Please believe me when I say that Caitlin’s teenage side-eye is truly an epic thing to behold. I see a lot of it when I’m putting her on the school bus at early o’clock.)

This communication method covers much of day-to-day life, and it means that Caitlin is very good at self-advocacy. She can tell us when she’s bored with an activity and wants to switch, when she’s tired, and when she’s having a great time. Cait has a very particular sense of humor: she understands sarcasm very, very well, and enjoys trolling us both on occasion. Recently: when I came home from work, a paranormal show was on television; I wanted to change the channel, because I find them annoying. Michael said she asked for the show. I asked her, “Did Papa make you watch a ghost show? Do you even like this?” She cackled and signed “like.”

As a family, we’ve developed a sort of internal shorthand with many of these methods. The rest of the world, however, has to work a bit harder to understand her, especially if they are meeting her for the first time. Which is where the “relay” from us, or from her teachers and aides at school comes in. As a result of her communication experiences, she particularly tends to connect very strongly with characters in media that are also non-verbal or have very limited verbal communication, but nearly always have someone to “relay” for them.

Snoopy has Charlie Brown, Curious George has The Man in the Yellow Hat, and Groot has Rocket. R2D2 has C3PO, and Chewbacca has Han Solo. BB-8 has Rey. Caitlin has my husband Michael and me at home, and her aides and teachers at school.

Caitlin is very aware of these parallels, and she is vocal about it when she encounters them.

These characters can provide convenient analogies when explaining Caitlin’s communication style to little kids, telling them certainly, that Caitlin can understand them when they talk to her, but we have to help by relaying her response.

Lately, she really, really identifies with Groot. Which, hey, that’s understandable! Groot is awesome: he’s kind, strong, loyal, a little bit silly, and he saves the entire team at the end of the first Guardians of the Galaxy film. Rocket “translates” for him wherever he goes, and Groot sometimes has difficulty processing information clearly (especially Baby Groot in the second film).

Is this how Caitlin sees herself in science fiction? I think she deserves better than that.

Why is the need for communication adaptations so rarely applied to human characters in SF/F? It is not an uncommon experience for us as a family to have folks talk to us, and not to Caitlin. As her parent, I can see how decidedly easy it is for other folks to (consciously or not) unperson a kid like Caitlin, to remove her agency, as much as she works daily to make it very clear that she is there, and she has opinions about whatever’s going on. This is in part because there are so few models in SF/F for communication adaptations. It’s easier to talk to us, her relayers, than to include her directly in the conversation—and that’s a problem, because Caitlin makes her own decisions, thank you very much. Our job is just to relay them.

(She has a very particular response to people that are condescending towards her. She has spent years learning over and over that these people are not worth her time, and she treats them accordingly.)

Luckily, there’s at least one TV series out there that might help a bit to push back against the notion that communicating differently means one is not quite human. As much as I have joked about showing her Buffy to prepare her for entering high school, we’ve been enjoying Speechless very much of late, and it’s probably a much better analogue for her upcoming experience. Speechless is new and unusual to us: before this, she rarely saw kids like herself on television or in movies outside of Sesame Street and a small handful of Sonic the Hedgehog episodes. Heck, she gets excited when she sees kids using wheelchairs in Target ads.

Representation is powerful. The actor who plays JJ, Micah Fowler, has Cerebral Palsy. JJ’s school aide, Kenneth, played by Cedric Yarborough, relays JJ’s words from his speech board, as does JJ’s siblings and parents. While it’s not identical, it is a very similar experience to ours.

Although we are not exactly like the family in Speechless, there are a lot of experiences that series that we recognize (the different way that the family responds to a common cold is particularly familiar), and that Caitlin recognizes, based upon her responses while we watch. JJ is, well, a teenager. He goes to high school, he makes friends, he hates homework, he picks on his siblings, and he really, really hates when people treat him like he’s not there, or like not capable of making his own choices, just because his method of communication doesn’t look like theirs.

Shows like Speechless mean that folks who don’t know us learn to treat Caitlin as a whole person, because they learn to see JJ as a whole person. This representation that makes our lives easier, because it’s one less thing we have to spend energy pushing back against. What I’d really love to see is something similar in SF/F media—the genre our family participates in the most—where characters who need a communications relay are, well, human. Not alien.

Disabled People Destroy Science Fiction is a continuation of the Destroy series (now brought to people by Uncanny Magazine) in which  disabled members of the science fiction community, will put themselves where they belong: at the center of the story. Often, disabled people are an afterthought, a punchline, or simply forgotten in the face of new horizons, scientific discovery, or magical invention. We intend to destroy ableism and bring forth voices, narratives, and truths most important to disabled writers, editors, and creators with this special issue.

Because Caitlin is not Groot.

Four-time Hugo Award winner Lynne M. Thomas is the Co-Editor-in-Chief and Publisher of Uncanny Magazine with her husband Michael Damian Thomas. The former Editor-in-Chief of Apex Magazine (2011-2013),  she co-edited the Hugo Award-winning Chicks Dig Time Lords, as well as Whedonistas and Chicks Dig Comics. She moderated the Hugo-Award winning SF Squeecast and contributes to the Verity! Podcast.  In her day job, she is the Head of Distinctive Collections and Curator of Rare Books and Special Collections at Northern Illinois University, where she is responsible for the papers of over 75 SF/F authors. You can learn more about her shenanigans at lynnemthomas.com.