Author Caitlin Higgins on the Inspiration Behind Her Debut Sci-Fi Novel, Lightless

24-year-old Caitlin Higgins’ debut sci-fi novel Lightless goes on sale today, and it’s a must-read for fans of lady-led space adventures and psychological suspense. Check out a synopsis below, as well as an essay from Higgins on the inspiration behind the book.

Serving aboard the Ananke, an experimental spacecraft, computer scientist Althea has established an intense emotional bond—not with any of her crewmates, but with the ship’s electronic systems, which speak more deeply to her analytical mind than human feelings do. But when pair of fugitive terrorists gain access to the Ananke, Althea must do everything in her power to defend her beloved ship.

While one of the saboteurs remains at large somewhere on board, his captured partner—the enigmatic Ivan—may prove to be more dangerous. A handsome, perversely fascinating criminal whose silver tongue is his most effective weapon, he has long evaded the authorities’ most relentless surveillance—and kept the truth about his methods and motives well hidden.
As the ship’s systems begin to malfunction and the claustrophobic atmosphere is increasingly poisoned by distrust and suspicion, things begin to fall apart. The final pages of LIGHTLESS will speed by in a rush to reach its explosive conclusion.

Sometimes, when I was trying to solve a problem in a physics class, I would pretend the particles were people.

This is not, needless to say, a good analogy. If people acted like particles I would have probably entangled myself with the guy I bumped into on the subway this morning, which would be uncomfortable for us both. But a grad student had told me once that the best way to solve a physics problem was not to logic it out, but to develop intuition. The subconscious works better than the conscious mind does: if you have an intuition for how the system will behave, you’re halfway to solving the problem, and with half the suffering to get there.

So I worked for intuition, sometimes in strange ways.

The first part of Lightless came from a particularly sticky problem set. I threw one equation at the problem. It didn’t take. I grabbed a whole handful of reasonable-looking equations and applied them, and ended up proving that 1=1. (Better than proving otherwise, at least.) I dug up another possibly-applicable equation, but by that point, I felt like Scheherazade spinning stories for one more night. I looked down at that list of increasingly desperate equations, and my brain offered, in the senseless way that intuition sometimes does, the image of a man in a room telling stories to bide his time until escape.

It wasn’t a long enough story for a novel—it was barely enough for a short story—and I was working on a different project anyway. So I held it in the back of my head.

The next semester found me in a class on thermodynamics. There was something existentially terrifying about thermodynamics. I liked the concept of entropy in a way that would have probably exasperated the professor. It was a grand and dramatic thing: the unavoidable increase of chaos, the inevitable end, the heat death of the universe. A year after I took the class, a different professor with a particularly dark sense of humor would tell my class the story of Ludwig Boltzmann, who committed suicide by hanging. “That’s what happens,” he told us, “when you do too much thermodynamics.”

In that particular class period we were working on equations of state. “Consider particles in an isolated box,” the TA told us, and so we did, starting with an ideal gas and working to describe the ways the particles interacted. The particles bumped into each other. The particles ran around. The particles collided with the walls, like they would escape but could not. Turn up the heat, and the particles ran more frantically about; cool them down, and they huddled together for warmth. There was a personality to them, like little people trapped in a box together, not a jar full of fermions. And with nearly every change (dS = δQ/T), their disorder would increase.

At some point, the little people-like particles became little people inside my head, all trapped together in an isolated place. And when they were trapped like that, feeding off one another, how the chaos of their actions increased.

Such a science fiction story origin needed a science fiction setting: a space ship, of course, with a very strange computer. There had to be one crew member who could bridge the space between the human conflict and the ship, someone whose loyalties could be pulled between ship and crew. And there would be a crew, but a small one, so that everyone could interact with everyone else.

But a box full of particles won’t do anything unless something changes about its qualities. There had to be an inducement to drive them all into greater and greater disorder.

A man in a room, telling lie after lie, biding his time, and concealing some terrible truth.

It seemed like a good inducement to chaos to me. 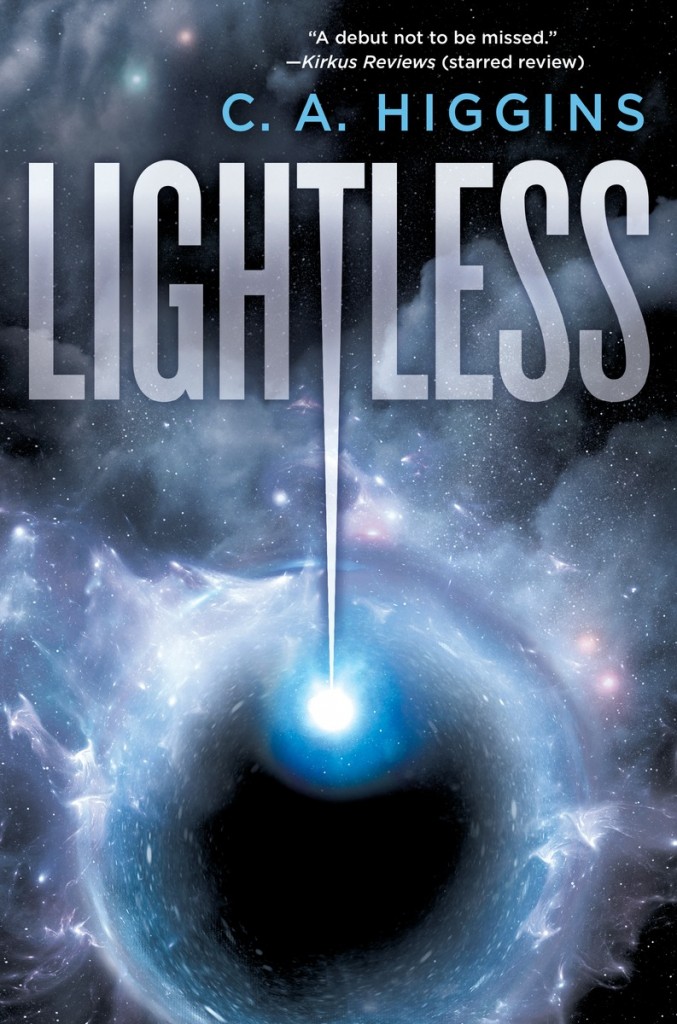 C.A. Higgins, or Caitlin Higgins, is a debut author who writes novels and short stories. She was a runner up in the 2013 Dell Magazines Award for Undergraduate Excellence in Science Fiction and Fantasy Writing and has a B. A. in physics from Cornell University. Lightless is her first novel, written during her time as an undergrad at Cornell.