Bully Gets Its PG-13 Rating After a Few Edits 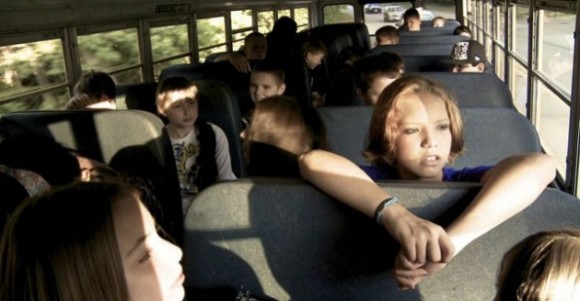 The Weinstein Company finally gave in to some of the pressure being put on it by the MPAA, and in the name of gaining its coveted PG-13 rating, exactly three instances of the “f-word” were edited out of its documentary Bully. And now, Bully is rated PG-13, meaning that teenagers can now see a movie they would prefer not to see with their parents sitting next to them — and that means they will be exposed to the message they really need to hear. But was the so-called “crucial scene” that contained all the bad language sacrificed for the rating?

The short answer: no. The scene with which the MPAA had such an issue, a scene that sees film subject Alex Libby being viciously cursed at on the bus, was not the scene that filmmaker Lee Hirsch decided to cut in order to make the rating. The language that had sent everyone into such a tizzy actually remains in that scene while three other “f-words” were taken out instead, decreasing the number of total mentions from six to three. PG-13-rated movies are only allowed one mention of the profanity, however an exception can be made if the MPAA board approves it by two-thirds of the vote. And that’s exactly what happened. Hirsch feels like he got just what he wanted:

“I feel completely vidicated with this resolution. While I retain my belief that PG-13 has always been the appropriate rating for this film, as reinforced by Canada’s rating of a PG, we have today scored a victory from the MPAA.”

When Bully premiered in select cities last week, it was released without a rating. This means that technically, anyone could get in; there were no restriction on the age of the audience. However, some theater chains, including AMC Theaters, still treated the movie as if it had an R rating, asking for permission slips from adults before selling teenagers under 17 tickets. Regal Entertainment was planning on following the same policy once the movie was released wide, which essentially still prevents the target audience of Bully from seeing it. Some chains won’t even show an unrated movie.

The edits seem like a very reasonable compromise on the part of the Weinstein Co., which refused to change the bus scene, but looked elsewhere to make the cuts the MPAA wanted. To their credit, the MPAA didn’t stubbornly stick to their guns on the “one mention” rule and voted on the three remaining curses, making a rare exception. Harvey Weinstein even applauded MPAA chair Chris Dodd for his support in the end. Said the MPAA in their statement:

“In the case of Bully, the ratings system has worked exactly as it is supposed to: parents have been kept informed of the content of each version of the film, and they have been given the information they need to make movie-going decisions on behalf of their kids.”

It’s been a lengthy battle — some even claim it was a publicity stunt (by a Weinstein? never!) — but at least now, kids really can see Bully. Sometimes, publicity stunts totally work!