Buffy the Vampire Slayer Dealt With a Man Like Trump Before, and His Name Was Warren 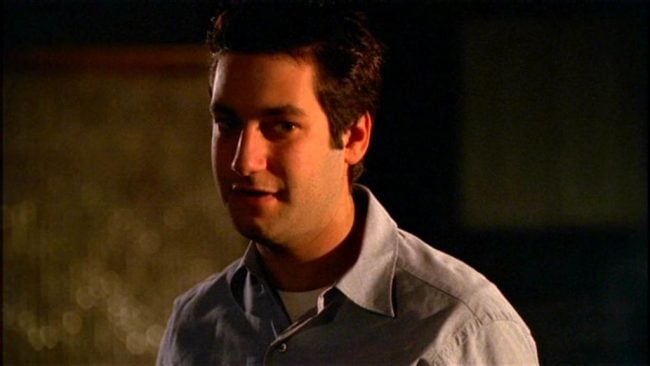 While I was watching Buffy and taking care of myself and trying to cope with painful existence on a planet as bigoted and nonsensical as ours—because you can cope without getting lost in fiction—I found a character who felt strangely familiar, one who I never really thought much about before: Warren. The Buffy season 6 villain seems, in many ways, to boldly portray the real type of man Trump is and the type of men he represents and empowers. Think about it.

Warren’s group, the Trio, is comprised of people who are weaker than him, people he can control and dominate. He thinks he knows everything about everything and houses a deep hatred and disrespect of women, both which manifest when he attempts to sexually assault his ex-girlfriend with what is essentially the magical equivalent of a date rape drug. And don’t get me started on those “balls of power” that he gets near the end of the season.

It’s all so obvious when you look back and think about the two men side-by-side. However, it’s doubtful that most Buffy fans are walking around with immediate recollection of everything done by one of the most deplorable character of the entire series. So let’s break it down, piece by piece.

The Trio and Incompetent Cabinet Appointments 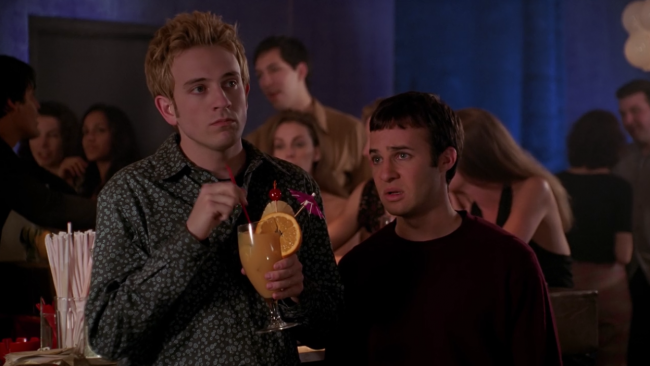 Warren had to surround himself with people who were weaker than him, people who were impressionable. In a small town like Sunnydale, and with a social circle so tiny, that left Andrew and Jonathan as his only options. He called their group the Trio, but in reality it was Warren and his two henchmen. However, despite the fact that he manipulates them, he does need them as much as they need him. He makes them feel part of something and they assert his dominance by following his orders.

That’s what Trump and his team are like. They’re all unqualified, un-intelligent, scared, weak little human beings who require money, possessions, drugs and alcohol, and constant elite circle-jerks in order to keep themselves going. They try to portray strength, but they can’t do it alone. Why else do you think rich people join all these fancy clubs and go to boring dinners and buy ridiculous things and play golf and tennis all the time and bury themselves in their careers? THEY. NEED. VALIDATION. They might not know that they’re terrible people who are destroying the planet but they know deep down that they’re not good. 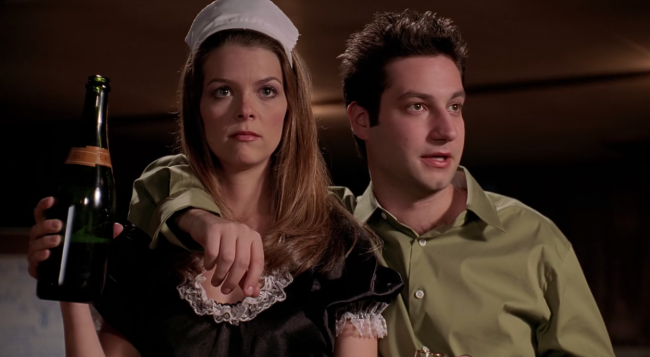 Now, I’m probably supposed to mention Donald Trump’s sexual assault accusations, but I won’t, because I do believe wholeheartedly that he did it, more than once. There’s absolutely nothing about his character that would suggest otherwise. And maybe that’s irresponsible for me to say as a writer, but I don’t care.

Warren uses what many have referred to as the magical equivalent of a date rape drug. He, Andrew, and Jonathan make something called a “cerebral dampener” which makes someone their “willing sex-slave,” as Warren puts it. How one can be willing and a slave at the same time is impossible for me to understand, but Warren is also not the first man on the planet to have used that phrase before, which again speaks to these larger, real-world male equivalencies. Warren could have chosen any woman, but he chose Katrina, his ex-girlfriend who dumped him, because rape isn’t about sex, it’s about power, which most people still don’t seem to get. He takes away her ability to say no because he feels he deserves her. He feels that she has no right to tell him no.

In Trump’s world, as a wealthy white man in America, his cerebral dampener would be drugs and alcohol, and threats of using his financial and societal power. He, similarly, tries his damndest to take away a woman’s right to say no. Men like him and Warren feel they deserve women because they have issues or they weren’t loved as a child or some other broken male taught them or a woman told them to hate women because it’s sometimes easier to hate yourself and people like you than to fight back. Either way, this is what rapists look like. They’re not always big, aggressive, masculine men. Sometimes it’s the insecure, angry at the world, beta males who are the biggest threat—the men who feel like they’re owed something. 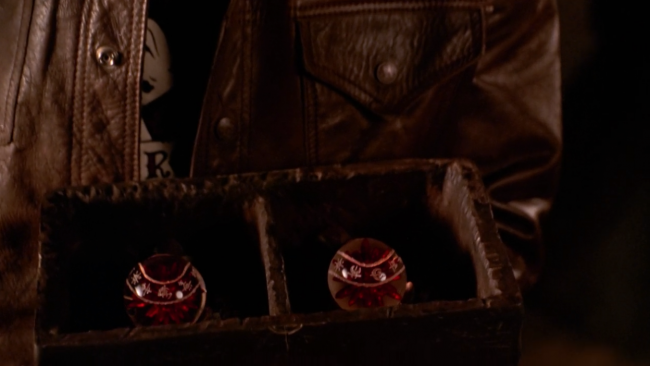 Warren is not strong, he’s not charismatic or charming, and he’s not brave. However, he grabs some magical orbs and suddenly he’s Mr. Macho, knocking men across the bar, punching Xander in the face, and even fighting Buffy. It’s certainly not an accident that the writers of the show chose orbs to empower Warren, because, really, it’s all a symbol for masculinity and manhood. Warren is all of the things that he’s not because he has orbs.

This is exactly the same as Trump, minus the actual orbs, of course. He’s not intelligent, fascinating, or powerful, but, in a country like the United States he is, because he’s a man, and men don’t have to actually be things to be things. For example, a dad can work 24/7, never see his child, and still be a dad, but if a mother works 24/7, and never sees her child, she’s less than a mother, she’s something terrible. Men can physically fight and tell prejudiced lies about queer and trans people, oppress everyone they disagree with, and start wars, and they would still be called the level-headed, less dramatic sex. What I’m trying to say is that men are allowed to not be like any given descriptor at all, but they’ll still be called whatever that descriptor is simple because they’re men. Men (white men in particular) are blessed with metaphoric orbs at birth. I wanted to note that I was gonna go with orbs as a symbol for testicles, but not all men have testicles or a penis.

The point is that Trump is an absolute joke. He’s running a country when he’s not qualified to run a PTA meeting. He’s allowed to be a mess and still have power because he’s a man, and manhood is a gift that allows you to be nothing and everything. Buffy smashed Warren’s actual orbs—and his metaphoric ones—in a single blow. Now, if we could just find a way to do that in real life with a huge portion of the men on this planet, that would be great. (I was going to say ‘most men on this planet,’ but I didn’t want to hurt their feelings. You know how sensitive they can be.)

And The Hatred Of Women That Warren and Trump Share 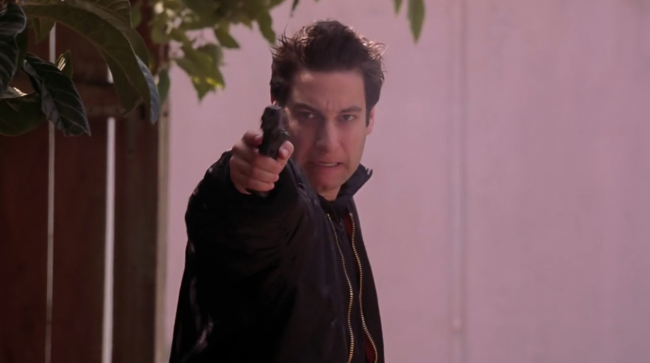 A straight up, no analysis required similarity between Warren and Trump is their hatred of women. It’s not that they’re passionate, or aggressive, or opinionated, or old-fashioned, it’s that they both hate women. It shows in how they talk to and treat women; Trump thinks women are his to touch, and Warren likes telling women to shut up or call them “bitch.” This hatred of women, above all else, was what made Warren, a regular human being, one of the most horrific villains in a show that’s about demons and monsters.

He wasn’t out there to take over the world. He wasn’t trying to take someone’s blood, or revive a powerful evil, or accomplish any kind of actual task. What starts as a way to assert his presence in a world that makes him feel weak, as a beta male, quickly transforms into a toxic hatred and fixation on one woman, Buffy, who is faster, stronger, and smarter than him. What viewers see of Warren suggests that he’s spent a lot of life losing and getting rejected, but Buffy, as a super powered woman—which in this case could be a metaphor for any empowered intersectional feminist—makes him lose his sanity and choose murder as an option because he just can’t stand losing to her.

Much like Warren, Trump obsessed over defeating a woman, in this case, Hillary Clinton. His campaign was less about himself and more about how bad she was, and how much better he was in comparison to her. Everything about his campaign fixated on her. It’s a wonder what the election would have looked like if he had not run against her. What would he have possibly talked about or based his campaign on?

People gloss over the Trump v. Hillary thing and that’s fine. Politics get nasty and there’s little we can do to support Hillary, who has, for better or worse, stepped away to find some peace. However, when people gloss over Trump’s hatred of women as an annoying or non-PC part of his character, they miss where he’s his most dangerous. He’s normalizing hatred, because unlike Warren, he’s not a super genius in a magical world. Trump looks and acts like people we’ve seen or people that we know. Society doesn’t demand more of him because society hates women too, and therein lies the beauty in Buffy’s writing: the Slayer was, is, and always will be a woman.

No societal attitudes or ideologies could shift the power of the Slayer. It was a dark secret, but it was something womanhood shared… this sense that even though they suffered and had to deal with more than men, that they knew they were better because of it, stronger.

We can’t expect a superpowered woman to save us from Trump but we can change culture. Warren felt out of place and violent on Buffy because misogyny was NOT the norm on the show. In the real world, Trump won’t be easy to shift or challenge until we create a culture wherein his kind of hatred and misogyny ARE out of place and not one piece of a much larger, nationwide puzzle.

There’s a lot of work to be done. Buffy didn’t defeat Warren overnight. There was a lot of pain and suffering along the way. But, for me at least, this piece is a ray of universal hope that someday Trump will meet his karmic/political/ideological Dark Willow—minus the magic and flaying.

Jayson Flores is the founder & editor of Gay on a Budget, Aries/Taurus cusp, bigender, Latinx, vegan, femme person, and the biggest Buffy fan you know. Now writing for Bustle, RESIST, and PRIDE. Also, a columnist and Assistant Editor at The Rumpus and creator of another newsletter called The Billions Unheard.  Just wants to make people feel less lonely in the world and save all the animals. Follow them on Twitter @gayonabudget.