Without Buffy Summers There Is No Tessa Battle 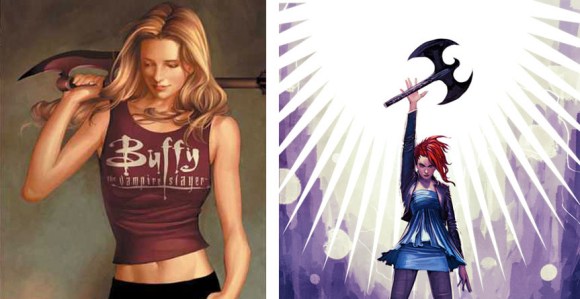 [Editor’s Note: Novelist Kelly Thompson has a few things to say about how, like a lot of us, Buffy the Vampire Slayer affected her life in a significant way. Read on to see exactly how and find out just who Tessa Battle is.]

I was late to a lot of things in my life. Late bloomer I guess they call that. As a result, a lot of the things that have really shaped me as a person came later than one might expect. I found comics at the age of 16 and from that day forward they were a great love (and obsession). When I was 20 I stumbled by chance upon the last episode of Season One of Buffy The Vampire Slayer (“Prophecy Girl”). It was already halfway through and though I had no idea what in seven hells was going on, I was immediately and permanently transfixed by what I saw.

It was love at first sight. 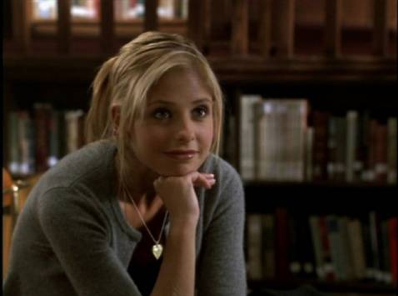 But I was having that moment for a television show.

And now, nearly 17 years later I am totally okay with that.

*boyfriend grumbles something incoherent but clearly displeased nearby*

Ahem. I’m okay with that because BTVS profoundly affected me on multiple levels: as a fangirl, as a budding feminist, as an artist and writer, and coming at a time when I was really just beginning to figure myself out, she (and her friends) shaped how I thought about women, characters, feminism, heroes, genre, media, and more.

When I was in high school, I spent almost the entirety of certain classes writing screenplays in my spiral bound notebooks (which may explain why despite taking more than three years of French, my French remains atrocious). Said screenplays were also atrocious and very free form as I didn’t know how to structure them or even how long they should be. I was a young writer who had no idea what she was doing. When I finally began the experiment of writing for things that already existed, in part to learn about structure, storytelling, voice, developing characters over time, and even how to subvert conventions, I naturally started by studying BTVS. So the show became the world I cut my teeth on, the one I studied to understand how things worked, the world I used to learn how to become a writer. I’m sure those first struggling steps weren’t pretty (and thank the gods those files were long ago lost) but given that love at first sight I experienced the first time I saw BTVS, it’s no surprise that it was the first world I turned to and the one I consistently turn back to.

When I wrote my first book — The Girl Who Would Be King, a novel about two teenage girls with superpowers — I dedicated it to Joss Whedon, because for the last seventeen years it has been his characters, his world building, and his sharp, funny, self-aware writing in everything from Buffy and Firefly to Cabin In the Woods and The Avengers that has shaped the kind of stories I wanted to tell and how I wanted to tell them.

While that remains true, when it came time to write my second novel, it was no surprise I found myself wanting to write something that could be — if I was very, very lucky — a Buffy The Vampire Slayer of sorts for a new generation.

And so Storykiller was born. 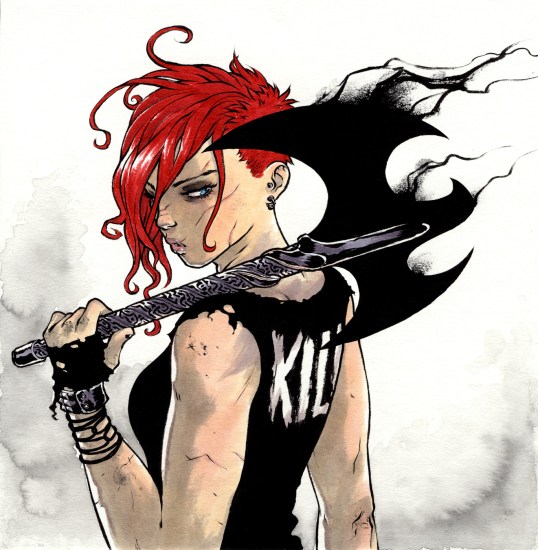 The concept for Storykiller is simple – a world in which all Fictional characters are real, and Tessa Battle is the one girl – that can kill them when they start trouble – which is why behind her back, they call her The Storykiller.

Tessa and Buffy are, naturally, very different characters. Other than their similar circumstances – teenaged girls with super powers living in a supernatural world – they are very different women in almost every way. But no matter how different they may be, there’s simply no way Tessa Battle exists without Buffy having paved the way. Buffy paved the way for so many heroines that followed her and to this day she remains that inspirational template and touchstone of feminism and thus, the initial and primary inspiration for Tessa.

“Strong female characters” as a shorthand for what characters like Buffy represent has gotten an odd reputation of late, with people both innocently and not so innocently misunderstanding the shorthand. When we use that shorthand we’re of course not talking about physical strength, although that’s sometimes part of it, but rather the strength and complexity that comes with any well-defined character . Buffy was the definition of a “strong” character, female or otherwise, not because she was an ultimate badass when it came time to kick ass, but she was complex and real. Buffy simply was. She was girly and also tough. She was witty but not always wise. She was a clothes horse and romantic, sometimes a flake, but she was also strong-willed and righteous. She was a rebellious teen but also a devoted daughter. She was good and yet never without flaws. She was funny and also tragic, living a very serious (frequently dire) life and she had incredible friends, allies, and even enemies that were equally as complex and well-considered. Every writer dreams for and aims for characters so complex and so strong, because that makes them real and relatable. I hope the characters in Storykiller are all so lucky to be that complex, that strong, that real. I certainly tried my best to make them so, although I admit that pretty regularly they just took over and told me exactly who and what they were, which usually means I did get something right along the way.

While I would never deign to hope that Tessa Battle and Storykiller can ever be as big, as important, or as groundbreaking as Buffy The Vampire Slayer, if it can reach even one reader and have a fraction of the impact that Buffy had on me, then I’d be pretty damn satisfied. 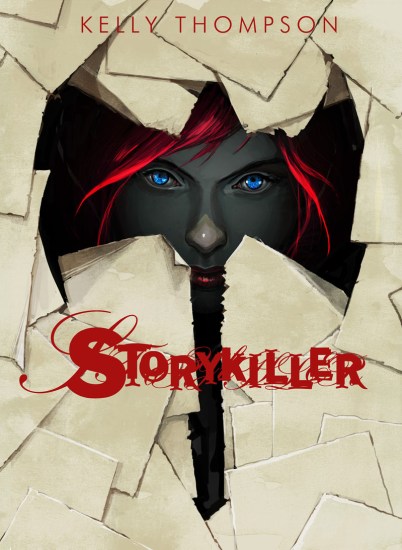 Kelly Thompson is author of the novel Storykiller and the superhero novel The Girl Who Would Be King. Comics loving feminist troublemaker and writer of She Has No Head!, co-host of the 3 Chicks Review Comics Podcast, Reviewer for Comic Book Resources, writer for Lit Reactor. Generally well liked, except when she’s detested.