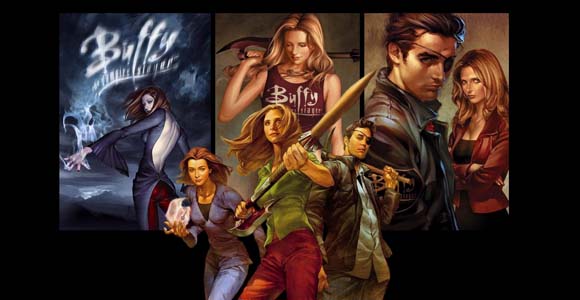 Exciting news for Buffy the Vampire Slayer fans. Dark Horse Comics have decided to bring in one of the show’s actors to write an arc of the upcoming comic season. And they’ll be bringing back a fan-favorite pairing.

Thanks to Dark Horse’s panel at Wizard World Portland, as reported by ComicsBlog.fr, we now know Nicholas Brendon (aka Xander) will be writing their Buffy comic. So far, Season 8 and 9 have wrapped up at the publisher, with Season 10 set to start in March. Brendon said he’d be writing issues 3-5 of that run. And what will his arc be about?

Viewers will remember the iconic episode of Season 5 where Dracula showed up and Xander became his “butt monkey.” It’s one of my favorites so I’m really excited to see where Brendon takes it. This isn’t the first time a Buffy actor has taken up the pen for Buffy comics. Both Amber Benson and James Marsters have worked on series. Marsters was also at the Portland event and discussed his work on a new Spike graphic novel set during Season 7 called “Into the Light.”

Christos Gage and artist Rebekah Isaacs will be the main creative team for Season 10.

(via Blastr, image via wallpaperswa)