So Say We All: A Look at the Awesome Science of Battlestar Galactica

It’s been over a decade since a reimagined version of a ’70s cult favorite sci-fi series premiered on the Sci Fi Channel and took the world of science fiction by storm. One Peabody, two Emmys, a couple spinoffs, and 12 years later, Battlestar Galactica’s popularity still feels novel. How did what’s ostensibly a space opera about the war between humans and the Cylons—the hyper-realistic robots they created—gain so much acclaim? And why did so many non-sci-fi fans end up watching and loving it?

Let’s put aside the fact that the show involves some of the most emotionally draining conflicts among characters this side of a George R.R. Martin novel and focus instead on the science of things. A key factor in Battlestar Galactica’s mass appeal was its creative team’s effort to incorporate real-world science, historical context, and proven psychological principles into a classic sci-fi setting. Like many high-minded sci-fi projects of the past couple decades, the series had a science consultant on its payroll: Kevin Grazier, a planetary scientist who worked at the NASA Jet Propulsion Laboratory before taking up the mantle of advisor to BSG showrunner Ronald D. Moore.

As Grazier put it in 2010, “…To get most of the things you see in the show at a confidence level that’s good enough for science fiction, your goal is to create more ‘Oh, wow’ moments and fewer ‘Oh, please’ moments.” That attitude lent to the show’s accessibility. Viewers who aren’t typically inclined toward sci-fi find Battlestar Galactica more palatable than other genre favorites given its plausibility and resistance to the more fantastical sci-fi tropes—and that accessibility paid off. Battlestar’s finale was the top-rated program in its time slot across both broadcast and cable, and was praised in publications as varied as The New Yorker, TIME, and even National Review.

RELATED: How Battlestar Galactica Brought Me Back to Earth

“[The creators] expect the viewer to take what is happening as ‘That’s just how it is’—which is great!” says New York City-based “science curator” Crystal Beth. Speaking with me over email, Beth explains that she recreationally researches what influenced the sci-fi she loves as she watches it. That research eventually led to her presentation on tylium ore, a nonrenewable resource used to power the spacecrafts in Battlestar Galactica, at Kevin Geeks Out, a monthly variety show at Brooklyn’s Nitehawk Cinema. “Alien, 2001: A Space Odyssey, Star Wars—many shows and movies do that, and it moves the plot[s] forward much faster.” 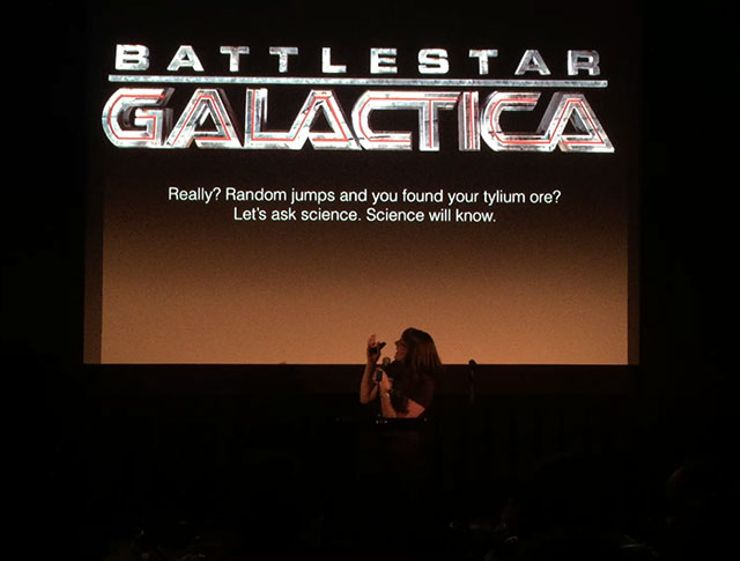 Along with that “ just how it is” approach, Beth appreciated the care with which the creative team treated basic elements of space travel. A favorite example of hers—an “Oh, wow” moment, to use Grazier’s terminology—is the very first Viper launch. Vipers, the human fleet’s go-to fighter ships, are soundless when they exit the Galactica’s hangar, which Beth found thrilling.

“I was so excited,” she says. “When they launched, I turned to no one and yelled, ‘What? That’s awesome! It’s quiet!” Since sound is created from vibrations in the air, the absence of air in space would render such a launch soundless. But, says Beth, “Most television series and movies add in the sound of spaceships zooming around.” That subtle incorporation of hard science—”Even a second of silence”—was enough to get her hooked. 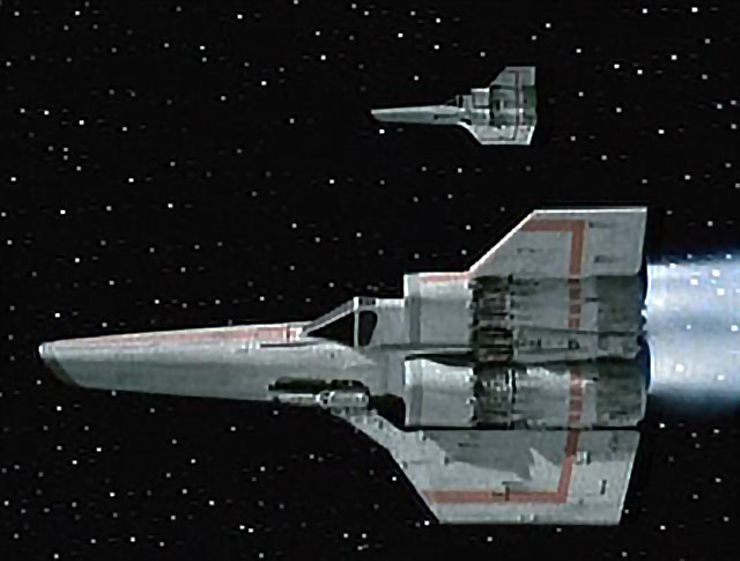 “I started watching the series from a place of ‘Just how real is this show, huh?’” she says. Aside from the hard science of BSG, she dug deep into how the creative staff sought inspiration from U.S. naval warfare, the viability of tylium ore as the sole source of the fleet’s ships’ energy, and the portrayal of how people behave when confronted with crises.

RELATED: Colonizing Mars: Comparing the Facts and the Fiction

“Multiple sources state that the show has one of the most spot-on depictions of what living on a battleship does to someone’s psyche,” says Beth. She cites the pilot episode, “33”—during which the Galactica must complete a faster-than-light jump every 33 minutes, requiring the crew to go five and a half days without sleeping—as one of the times the characters’ stress is most palpable. “You see the toll it has on everyone.

“The messy, ‘lived-in’ feeling of BSG was the best,” she continues. “Everything was still done on paper, the war room didn’t have fancy touchscreens, they used whiteboards to draw out attack plans, and the characters made mistakes. They made so many mistakes. Having urgency and incorporating human error helped make [the science] much more believable.”

Factor in those historical influences at work and the hauntingly accurate portrayals of people under duress, and it’s impossible to ignore just how much work the Battlestar Galactica creative team put into their world building. The term “gritty reboot” is more of a punch line now than it was in 2003, when the three-hour miniseries that launched the show first aired. But at the time, the concept was relatively new, and Battlestar Galacticagot it right in so many ways. It’s not a perfect show—no show is—but its seamless combination of wartime drama, weird-yet-relatively-true science, and jaw-dropping moments changed the face of sci-fi. And that’s well worth an “Oh, wow.”