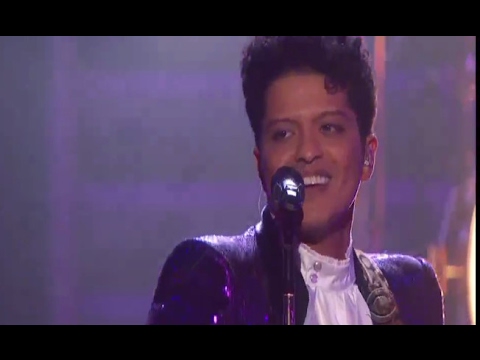 The Grammys last night were packed with some brand new firsts, some old disappointments (seriously what does Beyoncé have to do to get a Grammy around here), and heartfelt messages of resistance. Accompanying many of those significant moments were tributes to some of the most legendary music artists to ever grace the planet. One of these artists was Prince, and paying tribute to him was Bruno Mars, who—along with a glittery purple suit and a decent amount of hair product—led one of the most amazing tributes of the night.

I wasn’t kidding. In the suit, the ruffled white shirt, the hair product, and with that guitar, he cast a real spitting image of Prince himself. Mars, ever the showman, seriously brought the house down with his performance. Frankly, I can’t watch the video without getting just a little bit teary-eyed myself. He seriously did so much justice to “Let’s Go Crazy” that it hurts so good.

Mars performed alongside classic Prince co-stars Morris Day and the Time, who led off by playing their own songs as a tribute to the Purple One. They played “Jungle Love” and “The Bird” off of their Ice Cream Castle album, which was produced by—you guessed it—Prince. Fans of the band and of Prince will remember that it was Prince who “found” Morris Day and the Time and helped them rise to prominence by recruiting them into the Warner Bros. label.

If this didn’t quite hit your Prince fix for the day, then good news: Prince’s entire discography is now available for streaming over Spotify. As of 2015, his music was only available to listen to on Tidal (or, you know, your old vinyl or CDs). But now, he’s up across all streaming platforms, and if you’re anything like me, you’ve already been listening to him for the past 48 hours straight.