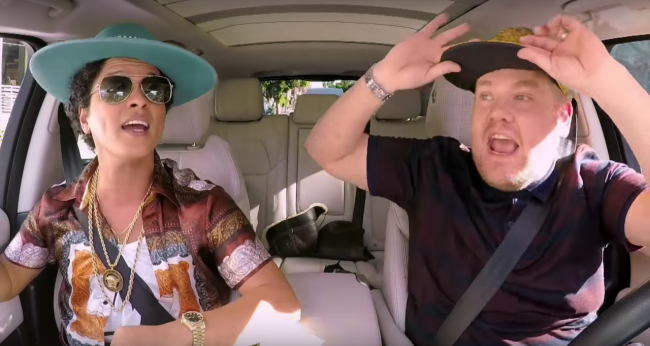 I’ll admit that when I was younger, I was really into Bruno Mars. His songs were catchy, and he just generally seemed like a fun dude. (Try and tell me “Marry You” doesn’t hit you with at least a few feels.) So thanks to James Corden and his ever-popular Carpool Karaoke segment, I get to relive some of those feels watching him and Mars sing along with some of his greatest hits.

A few of the songs you’ll catch here include “24K Magic,” “Versace,” “Uptown Funk,” and even a smidge of Elvis. It’s also just genuinely fun to watch Mars and Corden interact with each other. Mars has this total “Cool Guy” aspect about him, and Corden (who can certainly lay claim to that kind of title himself) shifts into a perfect foil, nerding out a bit, laying down the right amount of self-deprecation to just make that car ride seem just even more fun.

If you’re interested in listening to more Bruno Mars, maybe listen to his range as he tackles Adele’s “All I Ask.” The video could’ve done without the somewhat awkward shoutouts/callouts at the end, but hey, what’re you going to do? It’s still a good video.

Speaking of “24K Magic,” I haven’t really found much of an excuse to share this video elsewhere on the site, but here you go anyway.