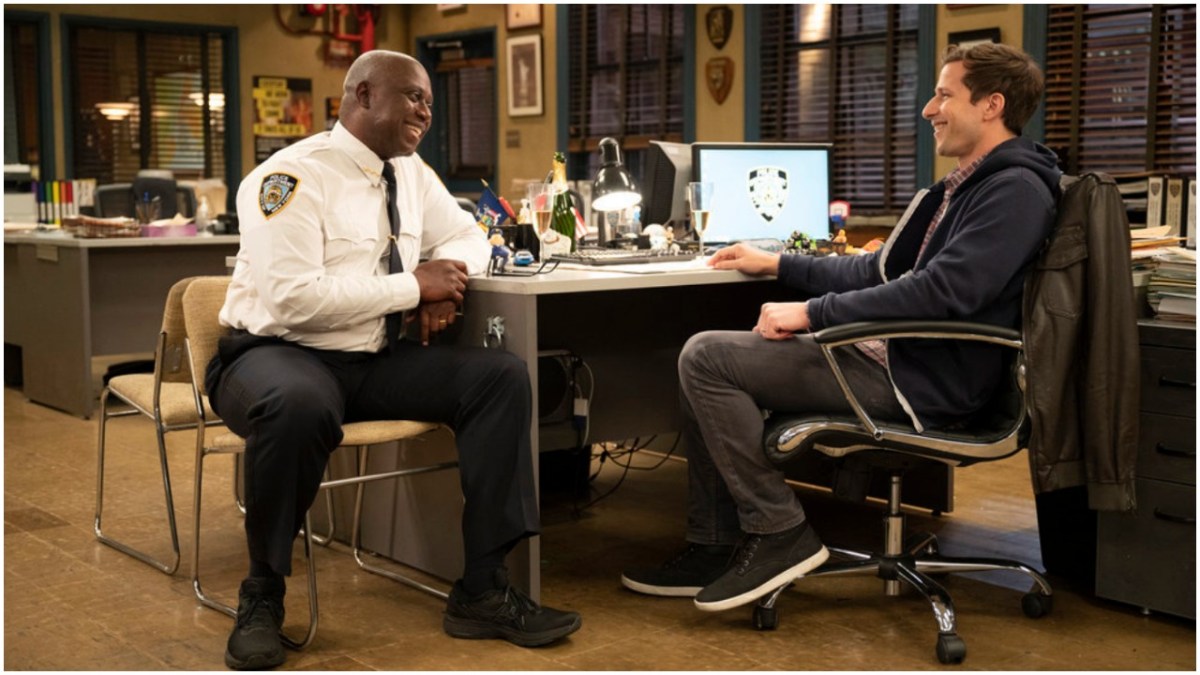 There’s nothing like a Mike Schur series finale. From The Office to Parks and Recreation to The Good Place, Schur has delivered some powerhouse finales that offer satisfying endings for the cast of characters we’ve come to love. And while they may no longer share the same space, be it city hall or the afterlife, they’ve helped one another grow and mature in various and unexpected ways.

Series finales are also a victory lap: a chance to trot out beloved guest stars (Chelsea Peretti! Jason Mantzoukas! Fred Armisen!), callback to old bits, and allow for the nostalgia of the series high points. So of course season 8 of Brooklyn Nine-Nine would end with a heist episode. The heist episodes are some of the strongest work the series has done, and are fan-favorite events. And Jake Peralta (Andy Samberg) is using this year’s heist to create a perfect goodbye to the Nine-Nine. Now that Amy (Melissa Fumero) and Captain Holt (Andre Braugher) are heading up the police reform task force, Jake has decided to retire as a cop and be a stay-at-home dad.

It’s an unexpected yet perfect ending for Jake, who has long sought a father figure (and found one in Holt) to become the kind of father he always wanted. Yet while Jake tells Amy of his decision, I half expected that the show would renege on his ending, with Jake rediscovering his love of police work. But I was pleased that the series didn’t cop out (pun intended) and pushed Jake to make the best choice for his growing family. Similarly, I was delighted that Rosa and Pimento’s potential reunion was a way for Rosa to poke fun at Amy’s heteronormative expectations of what happiness looks like. Sitcoms often rush to pair off their characters in romantic relationships, so it was refreshing to see Rosa end the series single and happy.

But the Nine-Nine is fundamentally changing, both as a workplace and as a television series. In light of murder of George Floyd and the protests against police brutality, B99 reworked their final season to address the cultural conversation around policing. And while those results may have been mixed, the series made a sincere effort to address police brutality throughout this season. In truth, a half-hour sitcom is not the best vehicle to address this issue, and B99 struggled to balance the gravity of police brutality with humor.

Instead of jamming everything into a “very special” episode, the series made police corruption a season-long plotline that both addressed the entrenched policies of the NYPD and those trying to reform them. Having Amy and Holt head up a reform task force works both as a plot point and as a logical next step for both characters. Meanwhile, Rosa Diaz (Stephanie Beatriz) left the force to become a private investigator, which also tracks for her character, as does Terry Jeffords’ promotion to captain of the Nine-Nine.

Ultimately, the series finale delivered on everything we’ve come to expect from Brooklyn Nine-Nine: plenty of humor, plenty of heart, and a soulful and satisfying farewell to a warm and wonderful series. NINE-NINE!