A Broken Arm Rewires Your Brain 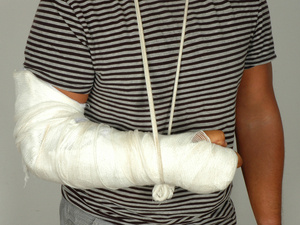 If you break your arm, especially your dominant one, you’ve got some serious compensating to do. For a few weeks at least, you’re going to have to start learning to be ambidextrous to do all kinds of important things like writing, using your phone, using a computer and, um, other stuff too. Of course, once you’re all fixed up, you can go back to normal, but that brief stint actually rewires your brain according to a new study published in Neurology.

In the study, researchers tracked a bunch of right-handed patients who had the misfortune of breaking their right arm. In only 14 days, the study showed that patients had lost about 10% of gray and white matter on the left side of their brains, and that the right side of their brains started beefing up. For those of you who may not have been paying attention back in grade school bio, that’s because the each of the brain’s hemispheres operate the other side of the body.

The surprising part is how fast this actually happens. It suggests that the brain is a lot more malleable than you might expect and that it adapts to new situations nice and quick for you. Granted, if you’re stuck writing with your off hand, it won’t seem like you’re getting better super fast, but rest assured your brain is up there pulling for you and rearranging its circuits to help you out. It’s not really a “mutation” so to speak, but it’s close enough that you can call it that if that makes you feel better about your broken arm. Just don’t expect to start shooting lasers out of your eyes or anything; that requires an implant, some toxic waste, and a lot of luck.