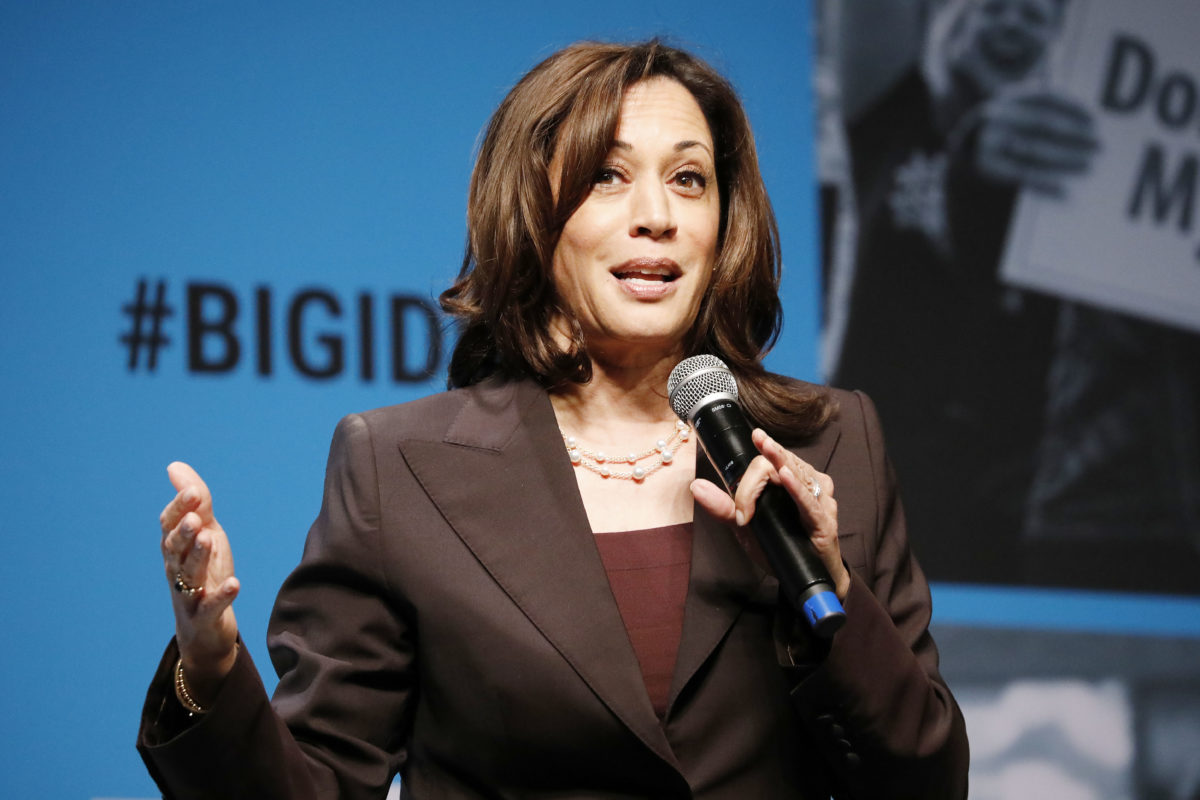 It’s true what they say: behind every great woman speaking her mind is some white bro waiting in the wings to interrupt her. California Senator and Democratic presidential candidate Kamala Harris was a featured speaker at MovOn’s Big Ideas Forum in San Francisco, where she was discussing her big plan for equal pay for women. Harris was part of an all-day event that also featured candidates Elizabeth Warren, Bernie Sanders, Julián Castro, and Kirsten Gillibrand.

In the midst of discussing equal pay, a protester crashed the stage and snatched the mic from Harris’s hand. Karine Jean-Pierre, MoveOn’s chief public affairs officer, immediately placed herself between Harris and the man, as Harris’s husband Douglas Emhoff and several staffers removed the man. Harris, who appeared unruffled, continued with her speech saying, “It’s all good, no worries.”. You can watch what happened below:

The man, Aidan Cook, is a 24-year-old animal rights activist with Direct Action Everywhere (DxE). He was removed from the premises but wasn’t charged with a crime (can’t imagine a person of color would receive the same treatment). MoveOn issued an apology to Harris, saying:

We sincerely regret that a protestor was able to gain access to the stage at our forum today & we apologize to Sen. @KamalaHarris. The protestor was removed & the program resumed. MoveOn members were excited to hear Harris continue to discuss her Big Idea to achieve pay equity.

The incident lead to questions about security at the event, and about secret service protection for presidential candidates. It was also evocative of a larger social issue: white men who think their opinion is more important than women of color. Cook’s actions are peak white male entitlement, the “well actually” guy come to vivid life with a scraggly beard and a manbun, protesting that he’s being “respectful” while stealing the spotlight at a woman’s expense.

I asked Aidan Cook, an animal rights activist who jumped onstage to interrupt Kamala Harris, if he had considered the optics of literally taking the microphone away from women of color.

“I did,” he said. “I tried to show my profound respect for each of the people onstage.” pic.twitter.com/uyMpV82lVP

The incident was all too familiar for women everywhere, who have been interrupted and talked over by men their entire lives. Many people took to social media to express their anger and frustration, while others celebrated Karine Jean-Pierre’s fearless reaction:

This is a frightening moment, especially in these times. Glad @K_JeanPierre @KamalaHarris and everyone on that stage was ok. Karine's reflex to jump up and protect the Senator was just bloody heroic. Whew… https://t.co/cmF9186oKc

Nothing about this was OK: Grabbing mic from @KamalaHarris; ignoring other women on stage; insisting his voice mattered more; resisting efforts to usher him off. @K_JeanPierre, you were mighty. @douglasemhoff, you were *that* husband, in the best way. https://t.co/1bu5hjeMXg

A bunch of us, all Muslim and brown folks, right now discussing what would happen to us if we were this Loser Bro who bum rushed the stage and grabbed the mic from @KamalaHarris, a Senaror and Pres candidate? Answers range from death to being tased to jail to beat down. Thoughts?

As I watch and rewatch the footage of the man rushing Kamala Harris on stage, I’m reminded of all the times cis white men have unapologetically disregarded my personal space as if the rules of civility don’t apply to them or as though I wasn’t a whole person deserving of respect.

Manbunwhiteboybeard hopping on stage uninvited to GRAB THE MICROPHONE OUT OF KAMALA HARRIS’ HAND and talk over the women of color IS THE EXACT METAPHOR FOR WHY WE ARE IN THIS POLITICAL HELLSCAPE RIGHT NOW #BigIdeaspic.twitter.com/vzKc5wZ24D

i know kamala's face in my soul and spirit.

i know exactly the thought process, the anger, the measuring of how to respond because if you pop off how you want to, folks will blame you for being mean to the white man, despite the fact that you've just been massively disrespected. https://t.co/DL90jKkULS

Perhaps what’s most frustrating about this incident is the fact that all of the news coverage will about this dude and not about Harris’s policies. If you want to know more about where Harris stands on the issues, you can visit her campaign website.