Brit Hume: Just Don't Be Alone With Women Ever! | The Mary Sue 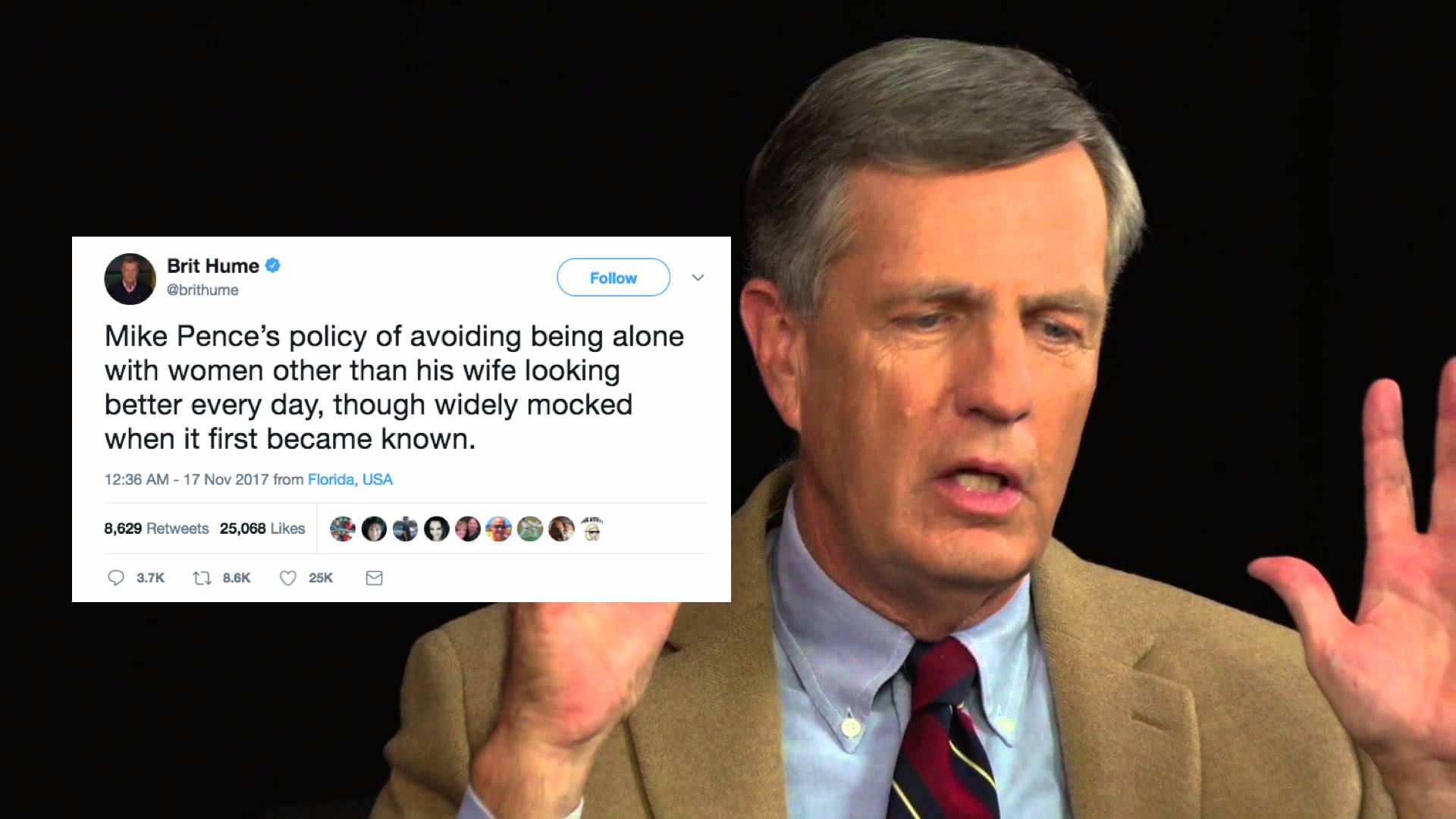 In what is surely a contender for the stupidest thing Tweeted this week, Fox News’ senior political analyst Brit Hume made an incredibly short-sighted and inaccurate analysis of our culture of harassment and assault. (Maybe he should have a different job title?)

Praising the rightly mocked “Mike Pence method” as the way to avoid impropriety, Hume is so wrong that it’s hard to even know where to start on this heaping trashbin of wrongness. Let’s dig in.

Mike Pence’s policy of avoiding being alone with women other than his wife looking better every day, though widely mocked when it first became known.

Mike Pence’s assertion that he avoids certain one-on-one meetings with the female of the species was met with derision at the time, and for good reason. It must be pointed out, however, that incredibly, the evangelical Pence’s approach was less severe than what Hume is suggesting. Pence told The Hill in 2002 that he never dines alone with women other than his wife, and will not attend events that serve alcohol without her.

Even Mike Pence never stated that he avoids one-on-one business meetings with women entirely, though we can imagine this policy of his probably extends in that direction.

It’s not hard to guess that Mike Pence must not have many close female aides and employees, at least not anyone with enough power and influence that they might—gasp!—one day end up in a situation where they are to take in a meal together, unsupervised. So the Vice President of the United States is likely biased against women workers, treating them as if they’re something to be quarantined and avoided, at least where meals and cocktails are concerned.

Secondly, of course, the problem with Pence’s method is that it suggests there is something innate and uncontrollable under the surface of certain male/female interactions, and the only way to be truly safe is to avoid the situation entirely. Is Mike Pence so incapable of resisting temptation when snacking alone with a woman who is not his wife that he goes out of his way to ensure it never happens? Methinks this is a Mike Pence problem, if so, and has nothing to do with the general concept of unsupervised meetings between the sexes.

Men would rather be proud cowards, living in the shadow of their pretend idea of biology, than make tiny efforts at self-improvement. Congrats on not only revealing you’re a creep, but also lazy. https://t.co/r12rJo6cqV

Hume’s cheerleading of the Pence Way hits on the same terrible, horrible points, and as I’ve pointed out, goes a step further by suggesting all one-on-one meetings be avoided, beyond those held over candlelight or with beer nearby. But in the matter of harassment and assault, the point is entirely moot anyway. People who are inclined to sexually abusive behavior aren’t dissuaded by the lack of a one-on-one meeting; they will go out of their way to set one up anyway.

Harvey Weinstein systematically lured women to his hotel rooms with promises that their meetings would be attended by others; those assistants were summarily dismissed. There are accounts of him following his targets down hallways and into rooms and cornering them against their will. Even if the Weinstein Company had a strict, 100% enforced rule that Harvey was never to meet with an actress alone, does Hume really think he wouldn’t have found a way around this? Abusers always do. This is what they do.

Further, by repeating Pence’s fallacy, Hume is forwarding the idea that relations between men and women are naturally unstable and uncontrollable, and the mere act of putting them in a room together alone will inevitably lead to something untoward. As though a man—or a woman—who had never been inclined to exploitative behavior will suddenly look around the empty conference room, spot their coworker of the opposite sex, and spontaneously decide to harass them because they are alone at last. Like that must always happen when you leave those Adams and Eves by themselves in any kind of garden. To suggest that this is somehow endemic to human nature is sick and infuriating.

If you are a person who is incapable of meeting with a member of the opposite sex (or the sex you are attracted to) without the irresistible urge to harass, touch, or abuse them, let me tell you a thing: that’s all you, buddy. That’s not the circumstance you’re in. That’s you. I don’t know about the rest of you, but I’ve had thousands of encounters with male colleagues, male friends, and men I’ve just met and never felt myself grappling with the overwhelming need to behave inappropriately with them. And somehow, these men managed to accord me the same basic respect.

It bears mentioning that Hume’s—and Pence’s—opinions on the matter also do not address a real elephant in that sexual harassment room: many of the people subject to the worst kind of physical and emotional harassment are the intimate partners of abusers. You can be alone in a room with your wife and still be a terrible person. With abusers, it literally does not matter who they are alone in the room with.

Thankfully, people are calling Hume out on his bullshit:

Orone can just be a decent a man who respects women and does not behave improperly around them. It’s realy not that difficult. The idea that simply being among women somehow inevitably leads to sexual harrasment is absurd.

No. You’re very, very wrong. Pence forcibly segregating women away from himself perpetuates toxic masculinity culture in a number of ways.

Second, political, academic, and business culture are all based on relationships. Who you know, who’s grooming you for higher positions, etc. Pence’s decision means he will inherently only cultivate men for the next generation of leadership, not women.

So if my boss follows this policy, he can take my male colleagues to work lunch and talk to them about career advancement, but not me, since I’d obviously try to seduce him. That seems fair. I️ wonder why women feel the GOP is misogynistic….

A policy of not being a creep would be just as successful, but without being weird.

Because it’s incredibly insulting to women and implies they will falsely accuse him. It also prevents women from being able to meet with him on the same terms as men.

Jesus, are you kidding?

And there’s the rub: beyond the sexist and idiotic ideas that we’ve already been over, there’s even deeper misogyny lurking here: that women are somehow responsible and must regulate their mere presence lest men seize onto them as the spoils of interoffice warfare; and the further winking suggestion from all of this that women will claim that they were harassed or attacked, falsely, using the proof of a one-on-one meeting to forward their dastardly plans. This is the heart of victim-blaming culture and plays into our oldest stereotypes about the lying duplicity of women.

Save yourself from those Jezebels and Delilahs, this seems to whisper. They’ll cut off your hair as soon as you’re alone together. I wouldn’t be surprised if Mike Pence has used just such a reference. This is all gross because of the way that it degrades both women and men, suggesting that we are no more than animals with undeniable natures that trend either to assault or to scheming deceit.

Here’s a pro-tip: don’t sexually harass, and you can hang with anyone that you want. I’m not gonna lie, it’s pretty awesome to have a diversity of friends and friendly coworkers. I guess I understand why Brit Hume, who works at hive of scum, villainy, and sexual harassment that is Fox News may be struggling to grasp this concept. It sounds like they might need to try some trust falls over there. Supervised, of course.