Astronomers Puzzled by Brightest Supernova Ever Recorded | The Mary Sue

Magnetar, I choose you! 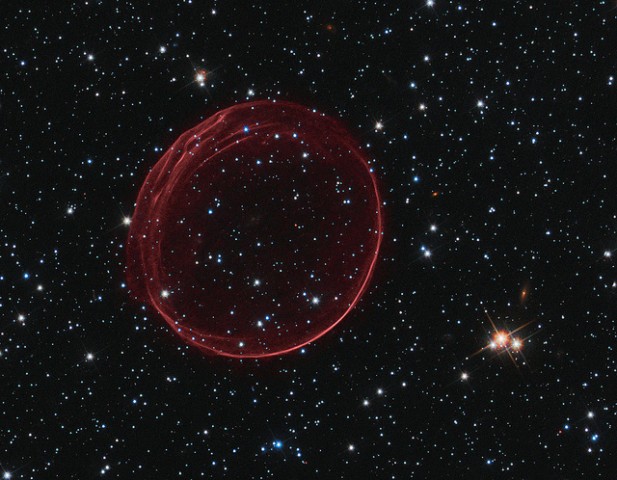 When a star reaches the end of its lifespan, it quite literally goes out in a blaze of glory in the form of a supernova. These stellar explosions are usually quite bright, but a recently recorded one has beaten them all—and confused the scientific community in the process.

ASASSN-15lh, which used to reside 3.8 billion light years away in another galaxy, exploded in a spectacular superluminous supernova twice as bright as any previously recorded. At that distance, we may not have noticed anything strange in the sky with our own eyes, but given that the astronomers who discovered it at Ohio State University were using equipment normally only capable of detecting supernovae up to 350 million light years away, it’s amazing—and perplexing—that we were able to detect this one at all.

Of course, at 3.8 billion light years in distance, the supernova happened 3.8 billion years ago if its light is reaching us now. The best explanation we have for its unusual brightness, at 570 billion times brighter than our Sun and 50 times brighter than our entire galaxy, is the star collapsing into a “magnetar” after the explosion, a highly-magnetized neutron star that would fuel some extra brightness in the supernova.

Still, that throws the current understanding of galaxy and star behavior into question, as the team’s paper, published in Science, explains that we’d expect to see this happen in a dwarf galaxy with active star formation, but it’s unusual in a large galaxy with little star formation, as was the case with ASASSN-15lh.

“The honest answer is at this point that we do not know what could be the power source for ASASSN-15lh,” Subo Dong, the paper’s lead author, said in a statement. “ASASSN-15lh may lead to new thinking and new observations of the whole class of superluminous supernova, and we look forward to plenty more of both in the years ahead.” So, everything we know is wrong, and now we get to change what we know until it’s right again. Ah, science.