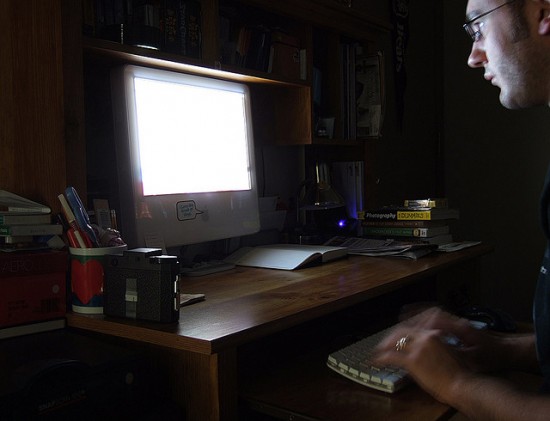 If you’re having trouble sleeping, it may be time to close the laptop and turn off the TV. That’s the conclusion from a new study released by the National Sleep Foundation, which looked at the corolation between sleep and electronic devices. It seems the brightly lit displays so common on phones, computers, and televisions may be ruining our chances of a good night’s sleep.

These bright lights, it seems, are tricking our bodies into thinking it’s day time. As a result, we’re more active in the time before bed when we should be winding down and preparing for sleep. From the report:

“Artificial light exposure between dusk and the time we go to bed at night suppresses release of the sleep-promoting hormone melatonin, enhances alertness and shifts circadian rhythms to a later hour—making it more difficult to fall asleep,” says Charles Czeisler, PhD, MD, Harvard Medical School and Brigham and Women’s Hospital. “This study reveals that light-emitting screens are in heavy use within the pivotal hour before sleep. Invasion of such alerting technologies into the bedroom may contribute to the high proportion of respondents who reported that they routinely get less sleep than they need.”

The study looks at many other technological intrusions into sleep. Some are quite common sense, like how leaving an active cellphone in your bedroom could mean you’ll be interrupted by a call. Other findings are more insightful, such as how playing video games and other interactive entertainment may affect the brain differently than a more passive activity, like watching a movie.

The report offers several strategies for better sleep. Most important among them is to simply make time for sleep. Plan for it, and then give yourself time before you get into bed to relax away from bright lights and engaging distractions. For people who can’t stop thinking before sleep, the study recommends keeping pen and paper near the bed. That way, you can jot down things you need to remember instead of dwelling on them when you should be relaxing. It also advises against napping for longer than 45 minutes, or after 3:00pm.

Having read the study I gave it whirl last night. I shut down my computer early, refused to look at my iPhone, and spent a quiet hour writing at my desk. I did fall asleep faster and easier, and was woken just as quickly by my cellphone. I’m halfway there.

(Sleep Foundation via Slashdot, image via the prodigal untitled13)