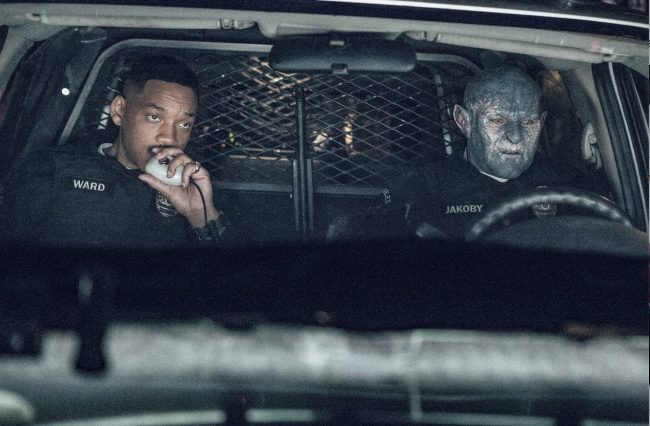 The first reviews of Bright are rolling in and for the most part, critics are not loving it.

Despite the fantasy crime film already getting the green light for a sequel, it seems the streaming service’s attempt to start a franchise should probably look elsewhere. Directed by Suicide Squad‘s David Ayer and written by Max Landis with a $90 million budget, the Netflix original is a mix of genres taking place in an alternate present day Los Angeles where magical creatures like orcs, elves, and fairies exist with humans. Bright stars Will Smith as LAPD officer Daryl Ward and Joel Edgerton as his partner, the first-ever orc cop. When the two discover a magic wand, described as “a nuclear weapon that grants wishes”, they set off a huge chain of events.

Most reviews draw parallels to Lord of the Rings and Training Day, but find that despite creating a fantastical world full of potential, the story itself is clumsy in trying to portray a magical metaphor for discrimination and full of plot holes. Smith’s line from the trailer “Faerie lives don’t matter today” raised some eyebrows, but many of these reviews go further in exploring how the attempts to push tolerance through the metaphor of an ancient orc conflict doesn’t quite work—in addition to some damagingly stereotypical portrayals of Latinos and people of color. However, there was also some praise for Edgerton and Smith’s performances, as well as their chemistry.

Here’s what critics had to say about Bright.

“There’s boring, there’s bad, and then there’s “Bright,” a movie so profoundly awful that Republicans will probably try to pass it into law over Christmas break.”

Todd Gilchrist of The Wrap:

“Even Will Smith’s irrepressible charisma can’t compete with the unrelentingly muddy production design, the poorly-conceived characters and a profoundly stupid racial metaphor that somehow amplifies stereotypes of actual ethnic groups. The result is another genre disaster that’s only impressive in how arrogantly the filmmakers presume audiences will want it to be expanded into a franchise […] “Bright” takes a bunch of gobbledygook from “The Lord of the Rings,” liquefies it in a blender and pours it liberally over the same “corrupt cop comes to a moral crossroads” blueprint that Ayer has been copying since “Training Day.””

“Dungeons and Dragons–style fantasy, with its species-specific stats and attributes, is a pretty suspect well to draw from if you’re trying to pull off some kind of modern-day race relations metaphor. It’s most typically used as a kind of blurring device, a way to talk about inequality and injustice in a non-specific, inoffensive way, with the built-in disclaimer that it’s all pretend anyway.”

“At first glance, it seems admirable to tell a parable of sorts about modern day class structure using orcs as a stand-in for the downtrodden and discriminated against. You see exactly the points Landis is trying to make. But over the course of Bright’s runtime it becomes uncomfortably clear that by using orcs as a surrogate for oppressed minorities you end up erasing actual oppressed minorities from the story. It quickly transitions from ‘Oh, I see what you’re doing’ to ‘Maybe you should not have done this.'”

Bryan Bishop of The Verge:

“Bright is a series of disconnected action vignettes that work as standalone sequences, but don’t hang together in any kind of meaningful way. It’s impossible to not think of Suicide Squad’s similar failings as Bright barrels from one dark, noisy scene to the next.”

“There is a whiff of an interesting idea in there, but it is buried in tedious scenes lacking clear direction, endless generic (and poorly lit) shoot-outs, and cringeworthy sequences of allegedly witty banter.”