Brett Kavanaugh’s Road to the Supreme Court, as Told by Celebrity Tweets | The Mary Sue

Brett Kavanaugh’s Road to the Supreme Court, as Told by Celebrity Tweets 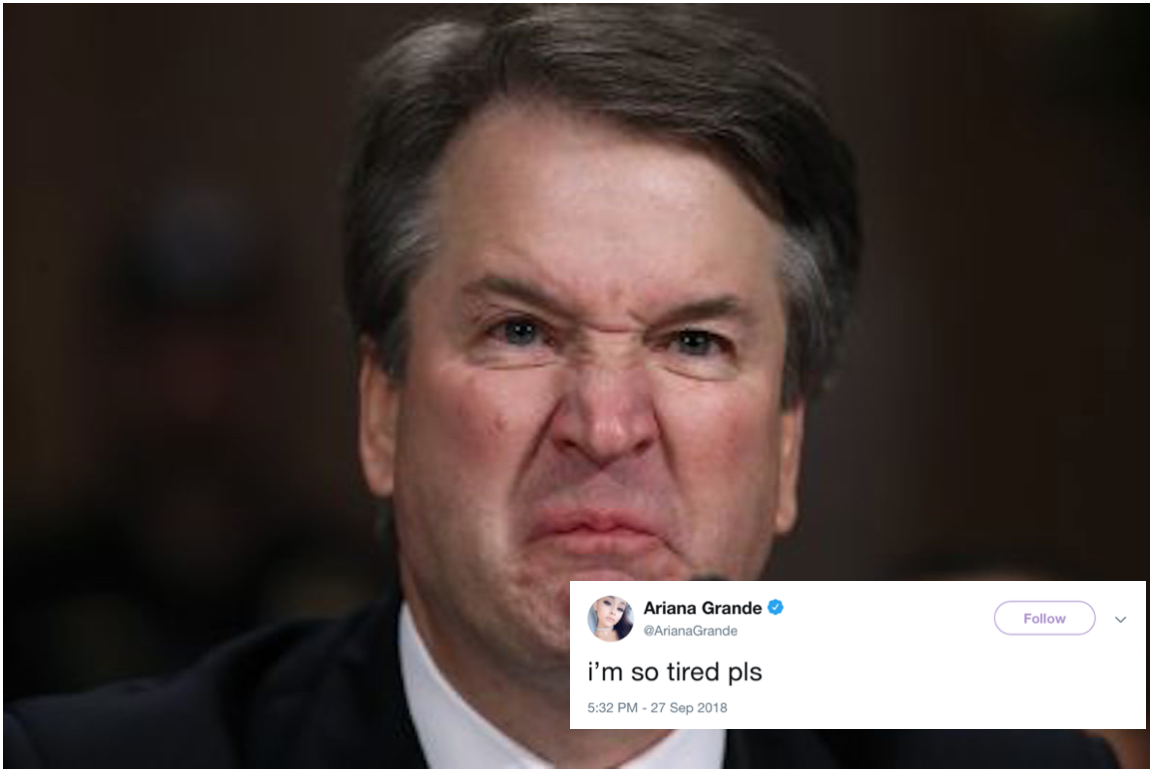 The past couple of weeks have been peak 2018. Doctor Christine Blasey Ford accused SCOTUS nominee Brett Kavanaugh of attempting to sexually assault her at a party while the two were in high school in the 1980s. Kavanaugh has denied all claims.

But, on Thursday, Sept. 27, Doctor Christine Blasey Ford, the woman accusing Brett Kavanaugh of sexual assault, stood before the Senate Judiciary Committee and gave her testimony. “I am here today not because I want to be. I am terrified,” Ford said. “I am here because I believe it is my civic duty to tell you what happened to me while Brett Kavanaugh and I were in high school.” Ford then went on to lay out the details of what happened the night of the alleged assault.

While Ford, though emotional, remained even-tempered and composed, when it was Kavanaugh’s turn to give his testimony he was … well the complete opposite. From the moment he sat down, there was yelling and crying punctuated with lists of names of women he claims to know, as if to suggest that men who have women friends never commit sexual assault (sure), someone named Tobin mentioned frequently, and a lot about his love of beer.

If you’re not getting the picture, and you didn’t watch Kavanaugh’s performance, it was a complete and total mess. Honestly, nothing has been more of a spectacle than Kavanaugh’s road to the Supreme Court, and so I’m enlisting the help of some celebrity “pals” who have been excellent when it comes to detailing the events of Kavanaugh’s confirmation hearings.

Let’s just kick things off with a tweet from Alyssa Milano back towards the start of the “Kavanaugh hearing shitshow.”  Like many protesters, the actress went the Handmaids Tale route calling for “never Kavanaugh — ” a sentiment we can all relate to.

TUNE IN NOTICE: My bad. My talk with @AriMelber on @TheBeatWithAri will air at 6:45pm EST/3:45pm PST. We talk about the Kavanaugh hearing shitshow. pic.twitter.com/aHZztusS7r

Let’s jump to the most-talked-about ( and most heartbreaking) part of this Kavanaugh mess so far: Ford’s testimony. Before she even got a chance to relay the details of her alleged assault to the Senate Judiciary Committee, Committee Chairman Chuck Grassley was already putting Ford on the defense.

Saying right off the bat that the committee didn’t find anything suspicious in the six FBI background checks done on Kavanaugh since 1993. That they didn’t find a “whiff of any issue, any issue at all related in any way to inappropriate sexual behavior.” Again, this was before Ford even had a chance to speak. Sit down, Chuck.

Today's hearing reminds us that to really tell a woman's story, one must begin with a 15-minute preamble from an elderly man about why her story is suspicious. #KavanaughHearings

When it was Kavanaugh’s turn to give his testimony, well there was one glaring unhinged sign: it was him, he was unhinged. Let me tell you, everyone took note.

Tfw you’ve never been held accountable for your actions pic.twitter.com/20qOsUTZa8

He’s bad at this.

Here’s where I let Padma Lakshmi do all the talking, because she nailed what everyone was feeling during Kavanaugh’s testimony.

When the perpetrator cries more than the victim #StopKavanaugh pic.twitter.com/3qmyGDJ19X

You know that feeling when you’ve puked your guts out and your eyes are watering and you taste nothing but bile? Current mood watching this hearing #StopKavanaugh

This story would not be complete if no one brought up Kavanaugh’s youthful calendars which he believes proves his innocence, because something about lifting weights at Tobins or “boofing.”

After Jeff Flake’s last-minute call for an investigation before the formal Senate vote, it was decided that the FBI would conduct a week-long “limited in scope” investigation into the allegations against Kavanaugh. I’m sorry, Trump said “less than one week.” What a comprehensive investigation, huh?

The FBI is investigating Kavanaugh this week, and I'm on the edge of my seat to learn whether he's innocent or super innocent.

If it’s possible, the whole thing is actually way worse than laid out here. At least we have some clever commentary to keep us going. Our collective Twitter catharsis is a real-time reminder that this is all Not Normal.