Question: Are We Tired of Quirky Bad Romance Covers Yet? Answer: No 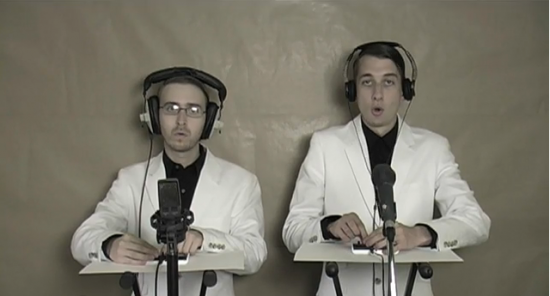 There’s a place in the Venn diagram of my soul where nerd overlaps with musician.  The part that kept saying no, no, the guy who’s made an audio track out of water-in-pipe-gushing sounds and deliberately-created-mic-feedback has a valid artistic statement to make so you sit there and listen with an open mind, young lady.

That voice didn’t even have to show up to get me to watch Brett Domino and Steven Peavis cover Bad Romance on a couple of hand-sized Korg synthesizers.

The Monotron (that’s the one with a keyboard) is a kind of Stylophone and things like it have been used by David Bowie, Marilyn Manson, and They Might Be Giants.  The Kaossilator (the one with a touchpad) is a dynamic-phrase synthesizer that can mimic 100 different instruments.

Ok, we’re not really sure what a dynamic-phrase synthesizer is either, but it sure sounds cool, doesn’t it?  Hooray for unusual instruments!

(via Geeks Are Sexy.)