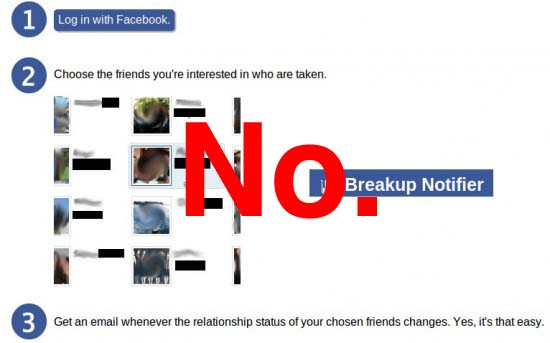 A couple of days ago, we reported on a new service called Breakup Notifier that provided Facebook relationship status email alerts. Well, only two days after we mentioned the creepy-but-probably-useful-to-certain-people service, Facebook blocked it. Not too long ago, Breakup Notifier had over 3.6 million users in its database, vindicating the use of all those hyphens in the previous sentence. Creator of Breakup Notifier, Dan Loewenherz, received this message from Facebook this morning:

“To ensure positive user experiences on Platform, we run routine automated screens that take user feedback, machine learning and various algorithms into account and remove spammy applications. For example, if an application is making an inordinate number of stream.publish calls and receiving a large number of user reports, it may be removed by our automated systems to protect the user experience and the Platform ecosystem.”

It seems Facebook is saying their blocking of Breakup Notifier is because of something other than the app essentially being something representative of negative uses for Facebook. You know, like being creepy.