Bradley Cooper Is The Voice Of Marvel’s Rocket Raccoon 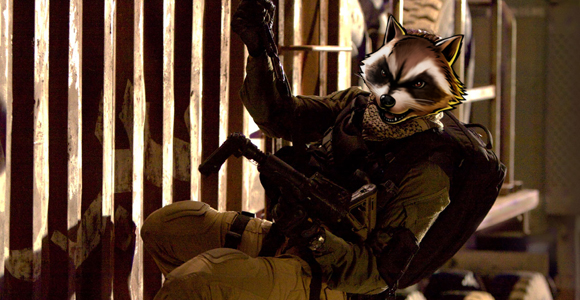 Since there’s not a lot of new info to be had on this story, I figured I’d create a fantastic image for you to look at. LOOK AT IT! BRADLEY COOPER IS A RACCOON!

Sorry, I got a little excited for how that photoshop turned out. Word came down from Marvel yesterday confirming casting for Rocket Raccoon in Guardians of the Galaxy. Cooper was previously said to be in talks to voice character.

Here’s what Marvel had to say in their official release:

Academy Award-nominated actor Bradley Cooper has officially joined the cast of Marvel’s “Guardians of the Galaxy,” lending his voice to the fan-favorite raccoon that will join Peter Quill (Chris Pratt), Gamora (Zoe Saldana) and Drax (Dave Bautista) on their epic adventure.

Cooper has previously starred in “Silver Linings Playbook,” for which he was nominated for an Oscar®, “Limitless,” “Place Beyond the Pines” and the “Hangover” trilogy, the latter of which has grossed $1.4 billion globally. He will next be seen in “American Hustle” which will reunite him with “Silver Linings Playbook” director David O. Russell. “Guardians of the Galaxy” will mark Cooper’s first voiceover work.

In the far reaches of the Marvel Cinematic Universe, an unlikely cast of characters including Peter Quill, Gamora, Drax, Groot and Rocket Raccoon must join forces to defeat a cosmic force of epic proportions. Directed by James Gunn, the live-action “Guardians of the Galaxy” will take fans to new corners of the Marvel Universe when it hits theaters August 1, 2014, but in the meantime stay tuned to Marvel.com for the latest news as it breaks, including official casting, first looks and more!

I’m neither here nor there on this casting but I do wish Marvel would dip into the wealth of professional voice actors out there for some of these voice-only roles instead of going for the big names. Earlier this week, Marvel announced actor James Spader would be playing Ultron in The Avengers sequel, a role most assume is going to be entirely computer generated.

What do you think of Cooper as the voice of Rocket Raccoon?